I'm not going to go into super deep detail about what's changed in WebOS 2.0 because our own Mithun has already done an awesome job going over the differences in much better detail than I could in an earlier piece for AnandTech.

That said I think it's still important to go over the higher level software changes just for the sake of doing so, and again make some comparisons to the Pixi. Side by side with the Pixi running WebOS 1.0 and the Veer running WebOS 2.0 something immediately stood out. In WebOS 2.0 there now is a "just type..." search logo at the top of the card view screen, and cards are appropriately smaller underneath it. My friend who uses a Pixi daily at first insisted that the Veer's screen was smaller (they're the same size) which was confusing until I realized that the discrepancy in card size when in the card view zom level is rather dramatic. See for yourself: 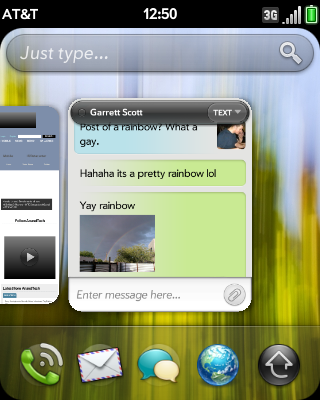 The screen size and resolution between the two is exactly the same, howver the addition of the "Just type..." search bar at the top of the WebOS 2.0 view results in dramatically smaller cards. When it comes to the messaging application and others, this often made the difference in terms of whether text inside the card was readable or not. You can really see just how much smaller the cards are now, and the Veer's very square aspect ratio accentuates the problem. I get the impression this was a feature designed on and for the Pre 3 with a much more rectangular aspect ratio. 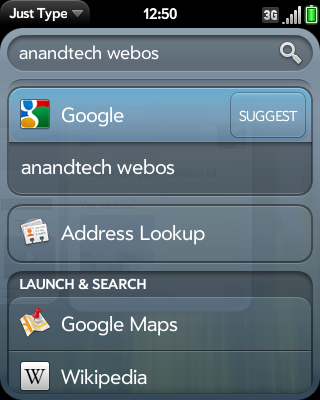 The improvements to the "Just type" search system are actually very good, with google suggestions populating the list, prompts to add new search engines whenever they're encountered on webpages, and more local application searching.

The other major improvement is Flash support in WebOS 2.0. It's enabled out of the box, though by default Flash elements are not preloaded and played, though you can enable this functionality. By default, you get grey boxes with a play symbol where Flash lives. 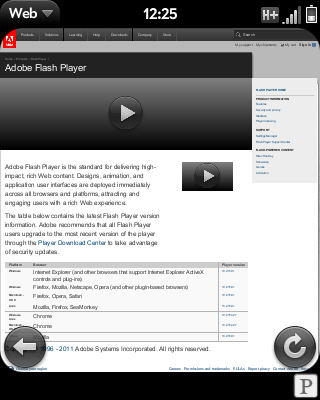 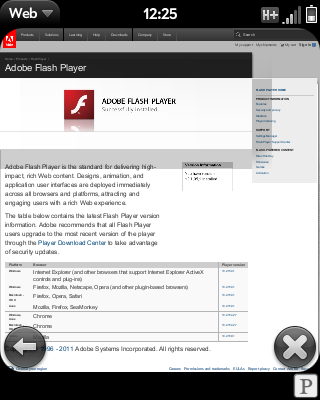 Tap on them, and Flash starts running, and the browser locks its current zoom level and translation so you can interact purely with the Flash element. Tapping on the X in the bottom right corner doesn't stop the Flash plugin, it gives focus back to the browser so you can multitouch translate and zoom around again. This is honestly a superior implementation to Android's unstated hybrid of the two.

Quite honestly other than the lack of any improvements in boot time (reasons for which we will get into in a few pages), I found that WebOS 2.0 is a decent step forward that's mostly incremental. To be completley honest, WebOS 2.0 feels more like WebOS 1.5 than a big update that really warrants a full version change.  I understand what HPalm is trying to do here though, and for the most part I'm pleased with the changes - there just needs to be even more of them, faster. Android and iOS both are borrowing from WebOS more and more each update. 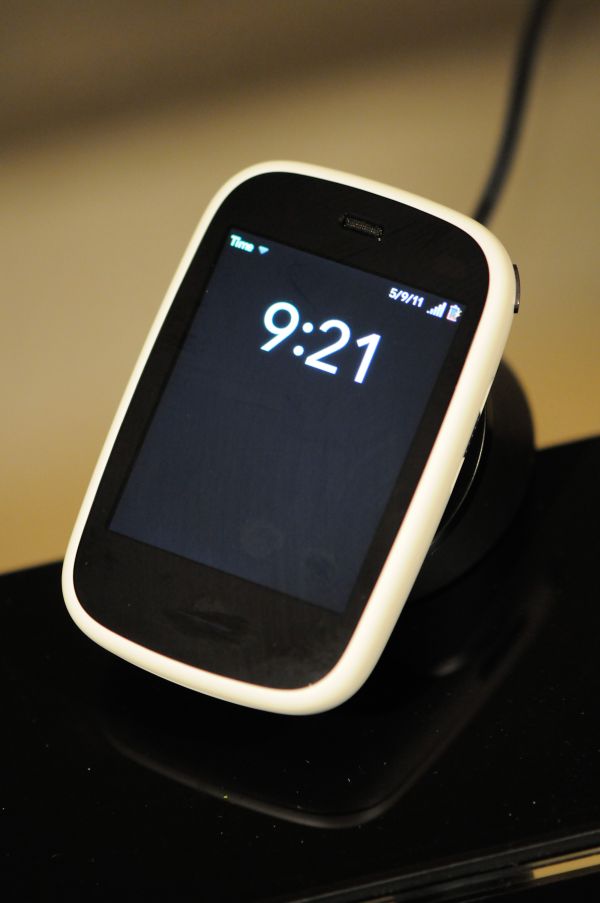 In the Touchstone the Veer also goes into exhibition view, even if right now it's essentially just the default display Mithun already showed in his own WebOS 2.0 exploration. I couldn't quickly find any examples of applications that leverage this view, but it's just one of the interesting innovations I feel like WebOS is pushing that it has to capitalize on before others beat it to the punch.