The author of the LAV Splitter / Audio Decoder has another nifty tool coded up for HTPC users with NVIDIA cards. Based on the CUDA SDK, it is called LAV CUVID. The video decoder is not a typical CUDA API and does not use CUDA to decode. NVIDIA provides an extension to CUDA called CUVID, which just accesses the hardware decoder.

The only unfortunate aspect of LAV CUVID is that it is restricted to NVIDIA GPUs only. While OpenCL might be an open CUDA, it does not provide a CUVID-like video decoder extension on its own. ATI/AMD has the OpenVideoDecode API, which is an extension to OpenCL. Despite being open, it hasn't gained as much traction as CUDA. The AMD APIs are also fairly new and probably not mature enough for developers to focus attention on them yet. Intel offers a similar API through their Media SDK. Again, the lack of support seems to turn away developers.

On Linux, there is the VA-API abstraction layer, which is natively supported by Intel, and has compatibility layers onto VDPAU (NVIDIA), and OVD (ATI/AMD). So, on Linux it is theoretically possible for developers to create a multi-format video decoder. But, there is no support for HD audio bitstreaming with Linux. For Windows, developers are forced to use DXVA(2) for multi-platform video decoding applications.

Is there an incentive for NVIDIA users to shift from the tried and tested MPC Video Decoder (which uses DXVA(2))? I personally use LAV CUVID as my preferred decoder on NVIDIA systems for the following reasons:

Almost all DXVA2 decoders can connect to the EVR. Advanced HTPC users are more demanding and want to do more post-processing than what EVR provides. madVR enters the scene here, and has support for multiple post processing steps which we will cover further down in this section. However, it doesn't interface with DXVA decoders. The LAV CUVID decoder can interface to all these renderers, and is not restricted like the other DXVA2 decoders.

Starting with v0.8, LAV CUVID has an installation program. Prior to that, the filters had to be registered manually, as in the gallery below.

After downloading and extracting the archive, the installation batch script needs to be run with administrator privileges. If the filter gets successfully registered, your favorite DirectShow player can be configured to use LAV CUVID. The process setup for MPC-HC is shown in the gallery. Make sure that the internal transform filters for the codecs you want to decode with LAV CUVID are unselected. After that, add LAV CUVID in the External Filters section and set it to 'Prefer'.

Here is a sample screenshot with EVR CP statistics for a MKV file played back with LAV Splitter, Audio Decoder and LAV CUVID Decoder. 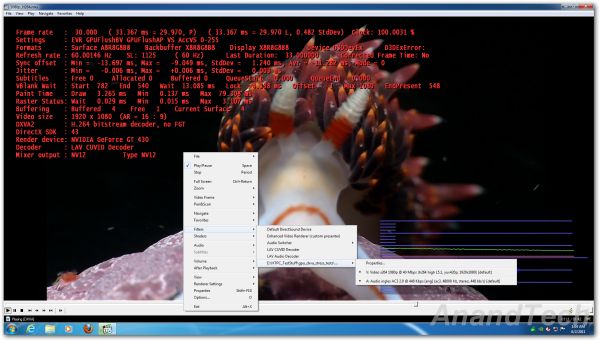 Now, let us shift our focus to madVR. It is a renderer replacement for EVR, and can be downloaded here. Currently, madVR does not do deinterlacing, noise reduction, edge enhancement and other post processing steps by itself. These need to be done before the frame is presented to madVR for rendering. When using a DXVA decoder, these steps are enabled from the NVIDIA or AMD control panel settings. With the LAV CUVID decoder, we get the post processing steps as enabled in the drivers. The decoded frames are copied back to the system RAM for madVR to use.

The madVR renderer uses the GPU pixel shader hardware for the following steps:

All of these things are realized with a higher bit-depth and quality compared to what the standard GPU post processing algorithms do.

The gallery below gives an overview of how to install madVR and configure it appropriately.

After downloading and extracting the archive, run the installation batch script to register the renderer filter. By default, the MPC-HC 'Output' options has madVR grayed out under the 'DirectShow Video' section. After the registration of the madVR filter, it becomes possible to select this option. When you try to play a video with the new output settings, it is possible that a security warning pops up asking for permission to open the madVR control application. Allowing the application to run creates a tray icon to control the madVR settings as shown in the fifth screenshot in the gallery. Screenshots 6 through 12 show the various madVR post processing options.

madVR requires a very powerful GPU for its functioning. Do the GT 430 and GT 520 cut it for the full madVR experience? We will try to find that out in the next section.