Last but not least as always is our look at the power consumption, temperatures, and acoustics. As there isn’t a reference GTX 560, we’re working with what we have: the ASUS GTX 560 DirectCU II Top. For the sake of completeness we’re including our results for power/temp/noise at both the Base (810MHz) and Mid (850MHz) on the ASUS card. However if ASUS is goosing the voltage a bit to hit 925MHz, then it’s likely we’re drawing a bit more power here than a card specifically targeted for those performance levels. 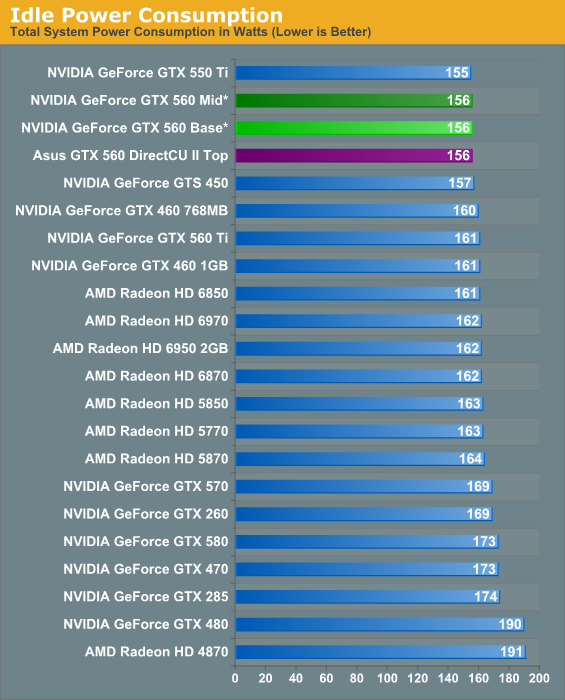 Idle power consumption looks very good here. The GTX 560 Ti already did well, and now the GTX 560 does even better. The difference ultimately comes down to the power savings realized by disabling a SM. 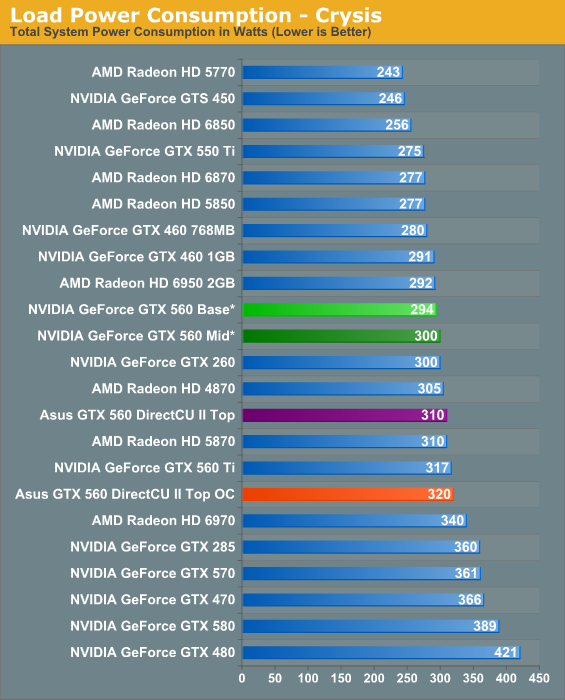 As for our simulated GTX 560 Base and Mid, we can’t say too much. Based on NVIDIA’s specs and the better leakage properties of GF114, there’s no reason why a GTX 560 built for those clocks shouldn’t be able to achieve power consumption similar to (if not better than) the GTX 460 series. We’d get far better data from a suitably lower performing GTX 560 card.

One thing that is clear however is that unless power consumption on lower clocked GTX 560s was more than 20W lower, AMD’s general advantage in power consumption is unchallenged. The same can be said for the GTX 6950, which consumes nearly 18W less than the ASUS GTX 560, even though the latter is often the performance laggard. 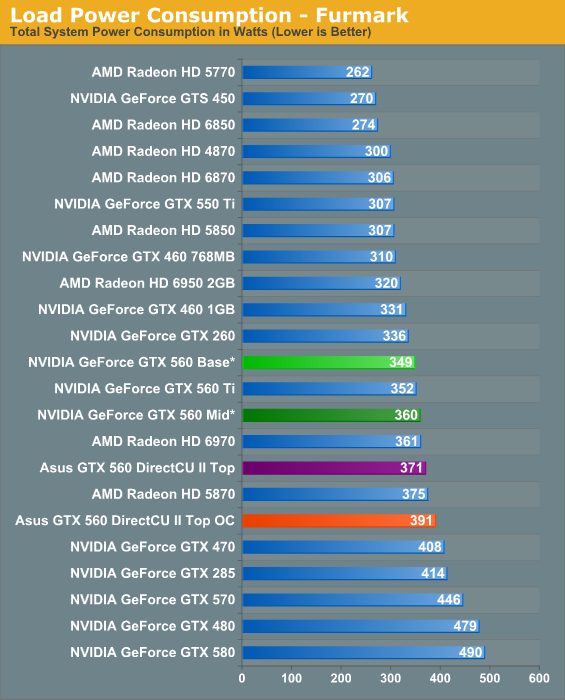 Under FurMark the ASUS GTX 560 actually does worse than the GTX 560 Ti, likely due to the ASUS card’s lack of overcurrent protection circuitry and the realization of the full impact of operating at a higher voltage. The difference isn’t this pronounced in games, but FurMark hits all the right notes. Along this same train of thought we see our overclocked ASUS GTX 560 consuming a further 20W beyond what the card consumes under factory settings. The overclocked ASUS GTX 560 usually could beat the GTX 560 Ti, but the power consumption is a major tradeoff.

As for our simulated GTX 560 Mid and Base cards, the results are of a similar nature as our Crysis power results. Power consumption is higher than both the GTX 460 series and AMD’s Radeon HD 6800 series due to the voltages involved. 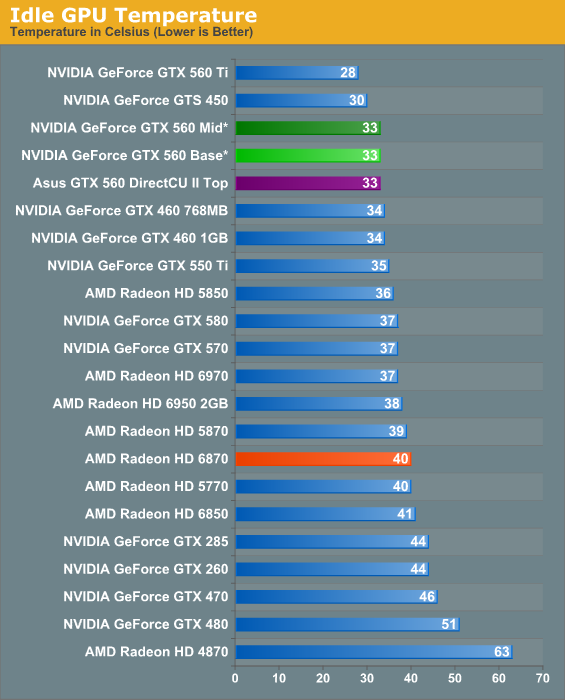 Idle temperatures are largely a function of the cooler being used. The GTX 560 Ti did exceptionally well here, and it’s nearly impossible to compete with it. At 33C the ASUS GTX 560 is among the coolest cards in our regular charts, and yet it can’t catch the GTX 560 Ti. 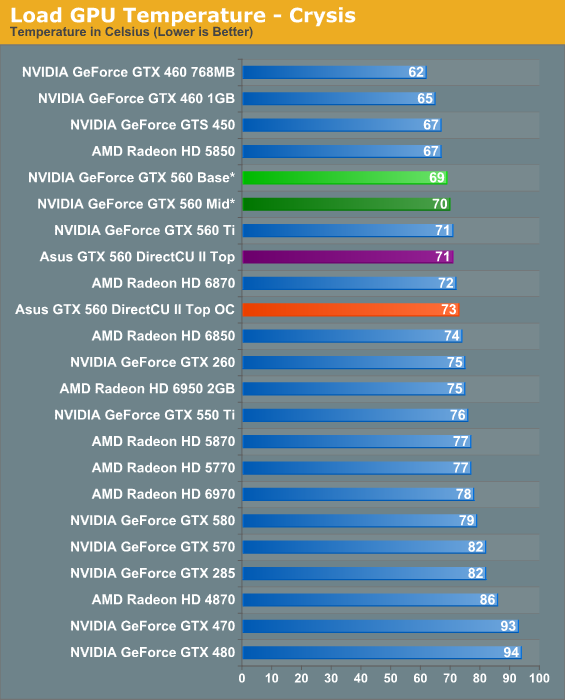 When looking at ASUS cards, we often see them favoring aggressive cooling over noise. We’ll get to noise in a bit, but certainly it looks like they have cooling as if not more aggressive than the reference GTX 560 Ti. At 71C the ASUS GTX 560 and the GTX 560 Ti are tied, and are both well below a number of other cards in temperature; an impressive feat given the performance we’ve seen earlier. Our simulated cards are a bit cooler, but they would probably be even better if they were at a lower voltage. 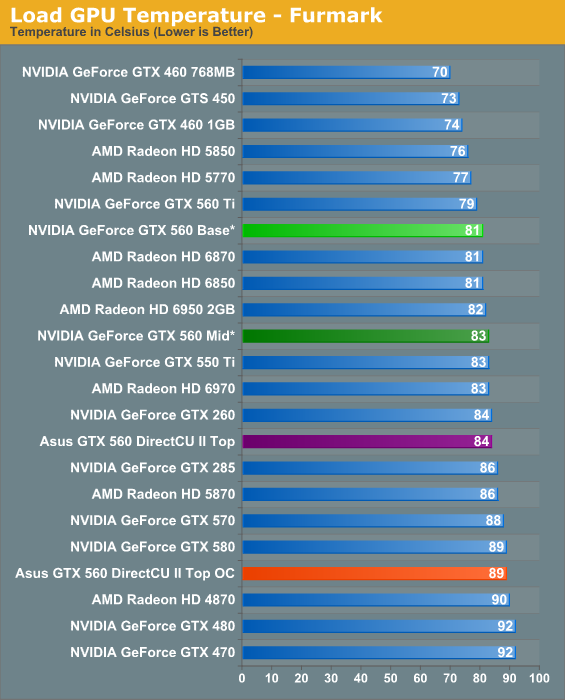 Unfortunately FurMark doesn’t look as good as Crysis, thanks in part to AMD’s use of PowerTune on the 6900 series, and the higher power consumption due to ASUS’s overvolting making itself felt. 84C under Furmark is not at all bad as it’s not even close to any sort of critical GPU temperature, but it’s not quite chart topping. It’s also well off what we’ve seen the GTX 560 Ti do, which is 5C cooler at 79C. Further overclocking and overvolting on the ASUS GTX 560 does dive the temperature up to 89C, which means at 1.062v we’re probably applying as much voltage as we can reasonably get away with.

As for our simulated cards, both the GTX 560 Base and GTX 560 Mid are well above their GTX 460 counterparts. Part of this goes back to power consumption, but it also involves just how different their respective coolers are. 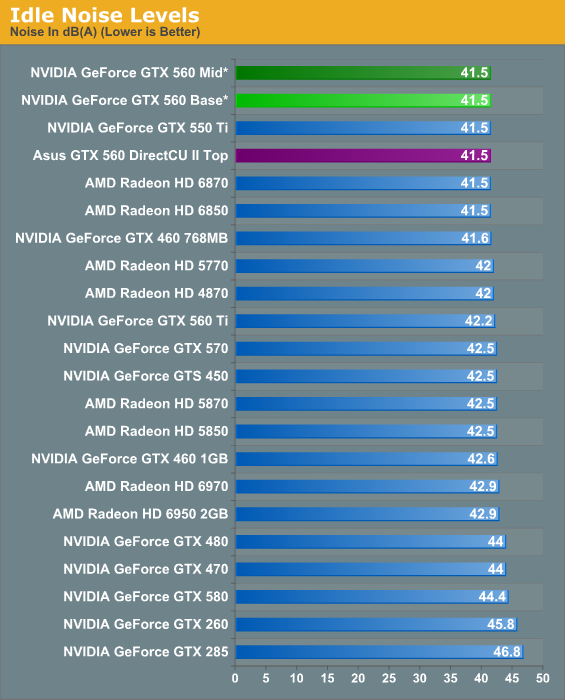 It’s rare to see a card not bottom out on our idle noise testing, and the ASUS GTX 560 doesn’t disappoint. At idle it’s whisper quiet, and it can’t be distinguished from our noise floor. 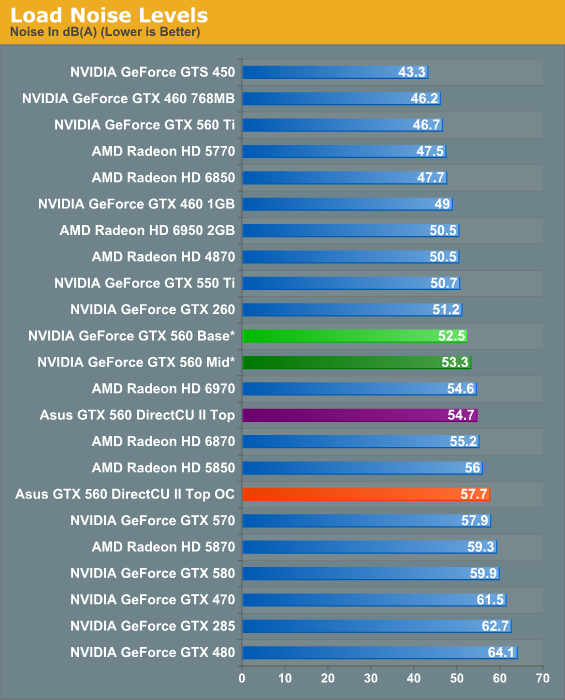 Last but not least is our look at load noise, where ASUS’s generally aggressive cooling finally becomes quantified. At 54.7dB it’s about the middle of the pack, and actually beats the Radeon HD 6870. But we’ve seen the reference GTX 560 Ti complete the same test at 8dB less – even if we could equalize the power consumption the GTX 560 Ti reference cooler seems to have an edge over ASUS’s DirectCU II cooler when it comes to noise under load. Cutting down the clocks to Base or Mid levels helps this some, but then rendering performance shrinks away from the GTX 560 Ti.