We'll get to our standard benchmark suite in a second, but with a technology like SRT we need more to truly understand how it's going to behave in all circumstances. Let's start with something simple: application launch time.

I set up a Z68 system with a 3TB Seagate Barracuda 7200RPM HDD and Intel's 20GB SSD 311. I timed how long it took to launch various applications both with and without the SSD cache enabled. Note that the first launch of anything with SSD caching enabled doesn't run any faster; it's the second, third, etc... times that you launch an application that the SSD cache will come into effect. I ran every application once, rebooted the system, then timed how long it took to launch both in the HDD and caching configurations:

Let's look at the impact on gaming performance, this time we'll also toss in a high end standalone SSD:

While the Vertex 3 is still a bit faster, you can't argue that Intel's SRT doesn't deliver most of the SSD experience at a fraction of the cost—at least when it comes to individual application performance. 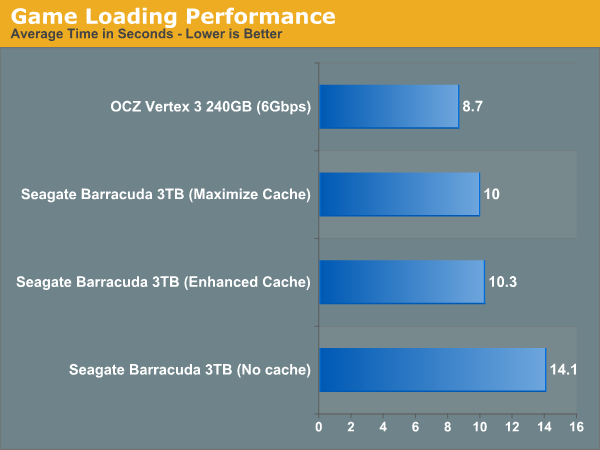 Look at what happens when we reboot and run the application launch tests a third time:

Gaming is actually a pretty big reason to consider using Intel SRT since games can eat up a lot of storage space. Personally I keep one or two frequently used titles on my SSD, everything else goes on the HDD array. As the numbers above show however, there's a definite performance benefit to deploying a SSD cache in a gaming environment.

I was curious how high of a hit rate I'd see within a game loading multiple levels rather than just the same level over and over again. I worried that Intel's SRT would only cache the most frequently used level and not improve performance across the board. I was wrong.

Remember that SRT works by caching frequently accessed LBAs, many of which may be reused even across different levels. In the case of StarCraft 2, only the first multiplayer level load took a long time as its assets and other game files were cached. All subsequent level loads completed much quicker. Note that this isn't exclusive to SSD caching as you can benefit from some of this data being resident in memory as well.