With the Redwood cards (5670 & 5570), we saw two distinct reference designs even though both used the same GPU. The 5670 was a full-profile card while the 5570 was a low-profile card intended to fill a higher performance low-profile niche. With the Turks cards however, this kind of stratification is gone. 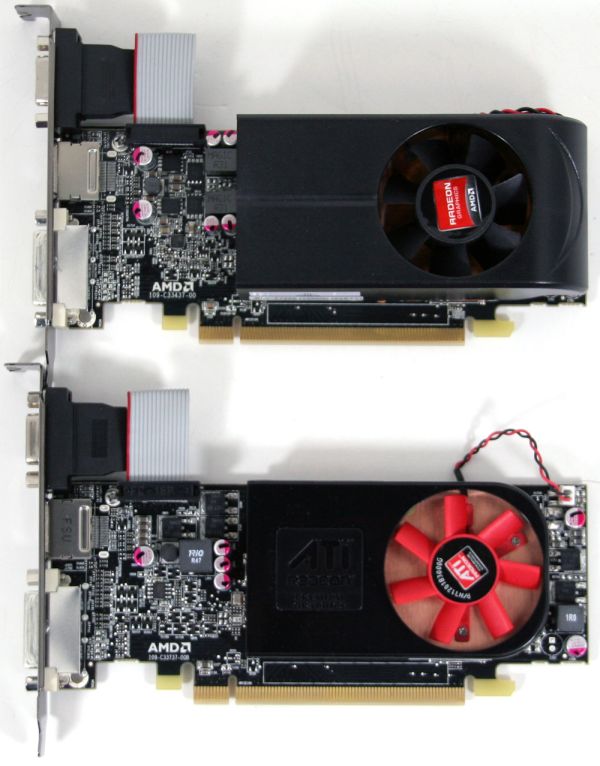 Look closely and you'll see the ATI logo. AMD is using spare 5570 coolers for the 6570 reference design, which means these coolers predate the AMD rebranding. Retail cards won't be like this, however.

Instead both reference cards are low-profile cards. The PCB for both cards is quite similar, but not identical. In practice with only a 6W difference between the two cards, we can’t imagine too many partners will roll different PCBs for the cards. The difference between the two cards really comes down to the cooler used – the 6570 uses the same AMD reference cooler we’ve seen on the 5570 and 6450 (it is in fact a spare 5570 cooler), while the 6670 uses a new low-profile double-wide cooler. This is how AMD managed to get the 6670 out as a low-profile card as opposed to a full-profile card like the 5670: it’s shorter, but it’s wider. 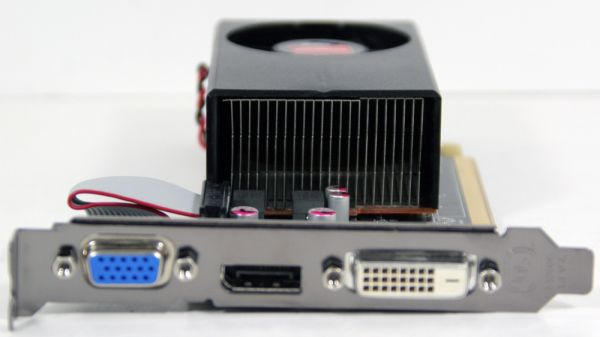 Our 6670 is equipped with 4 2Gb 5GHz Hynix GDDR5 memory modules. This marks the first time we’ve seen 2Gb GDDR5 on anything other than a high-end card, which is a good sign that we should expect to see more cards using 2Gb GDDR5 in the near future. Both the 6670 and 6570 measure 6.61” long, the same length for that matter as the 6450.

Display connectivity is the same as with other AMD low-profile cards. On the PCB are a single DVI-DL port and a DP 1.2 port, while on the bracket is a VGA port attached with a ribbon cable. With partner cards we’d expect a number of cards to drop the DP1.2 port for an HDMI 1.4 port on both cards. But on that note, one thing we’re still trying to get confirmation on from AMD is whether Turks can drive more than one DVI-type display at once. We have no specific reason to believe this, but Barts did drop a DVI-DL port for a DVI-SL port, so if anyone is going to drop down to supporting a single DVI-type display at once, it’s AMD. In any case through the magic of DP1.2 MST hubs, the 6670 can drive four displays. Meanwhile the 6570 can drive three displays.

As was the case with the 6450, AMD’s reference design is only for engineering and sampling purposes – it’s not going to be used in retail cards. We don’t have any pictures of retail cards as of press time, but we’d expect 6670 and 6570 designs to resemble 5570 designs with a larger cooler more suitable for Turks. As such our temperature/noise results are a decent approximation of the cards that will be on the market, but they won’t match any specific retail cards.