Last but not least as always is our look at the power consumption, temperatures, and acoustics of the Radeon HD 6450. Our power usage data should closely mirror any other 6450, but with a variety of passively cooled and actively cooled cards, many retail 6450s will be quite different.

Please note that we’re only including dGPUs here. Sandy Bridge power consumption is not even comparable due to the difference in everything from the CPU to the PSU. 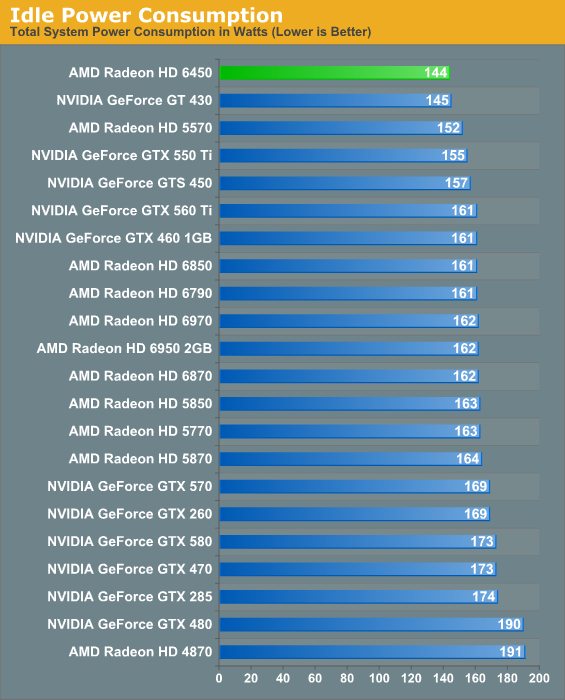 At idle the 6450 pulls about as little as we can get away with on our 1200W Antec Quattro PSU. It’s without a doubt the lowest idle power consumption out of this current generation of GPUs. 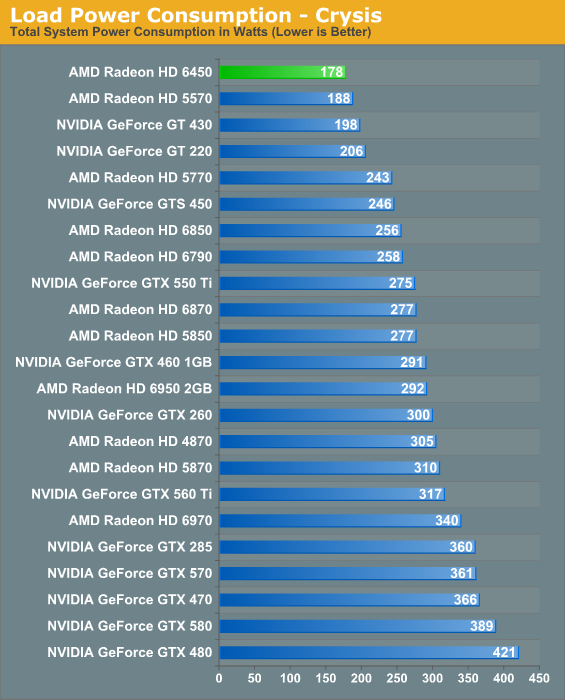 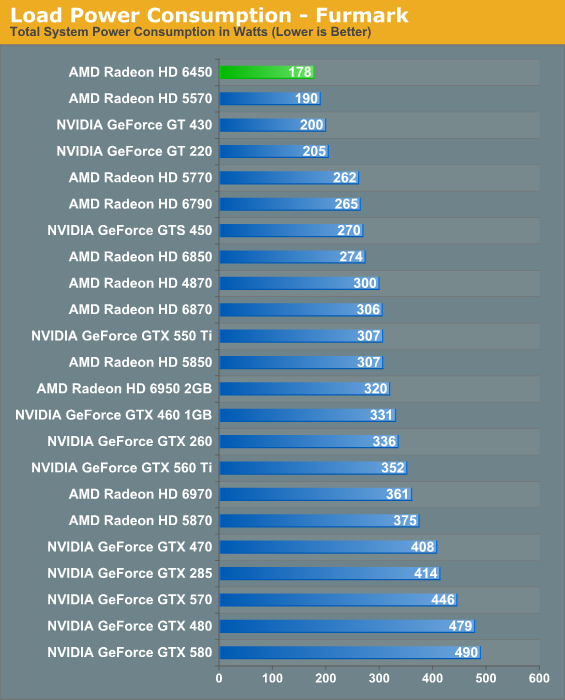 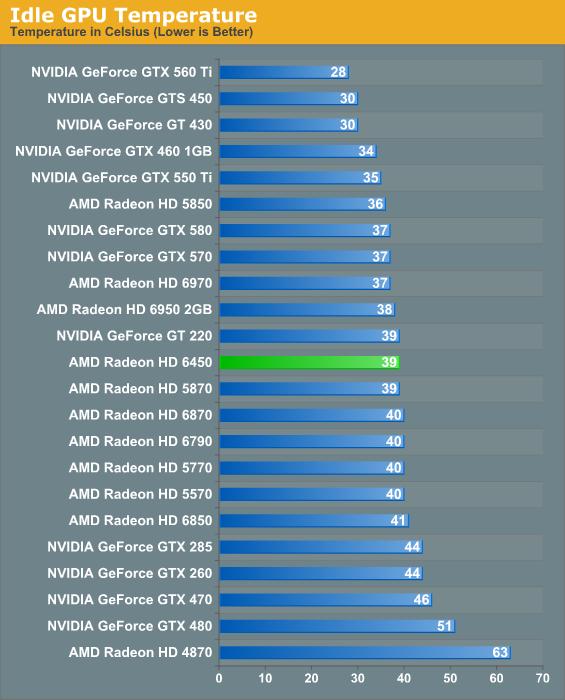 The cooler on the 6450 is identical to the cooler on our 5570 sample, so it shouldn’t come as a surprise that cooling characteristics are similar even with the lower power consumption. In this case an idle temperature of 39C is not close to being record-breaking, but it is consistent with this cooler. Running the fan faster could lower the result at the cost of noise, but there's no need. 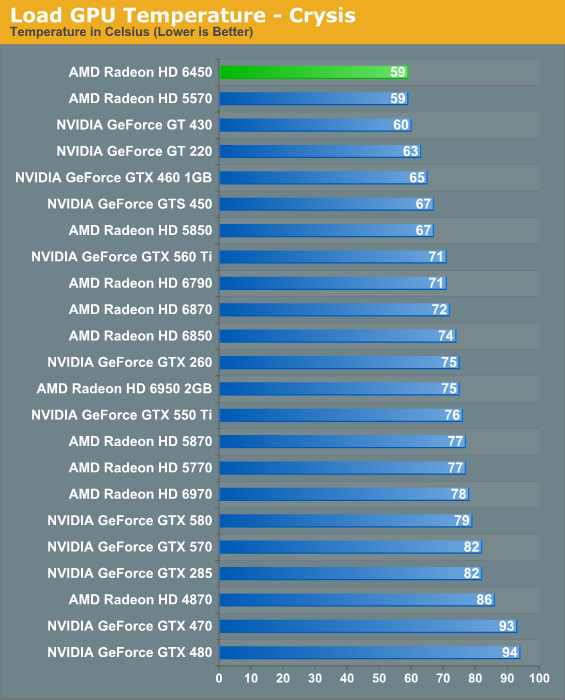 Now load tempeartures on the other hand can certainly set some records. At 59C under Crysis the 6450 is tied with the 5570 for the coolest actively cooled card. We’re actually surprised it doesn’t do a bit better here given the similar cooler but lower power consumption. 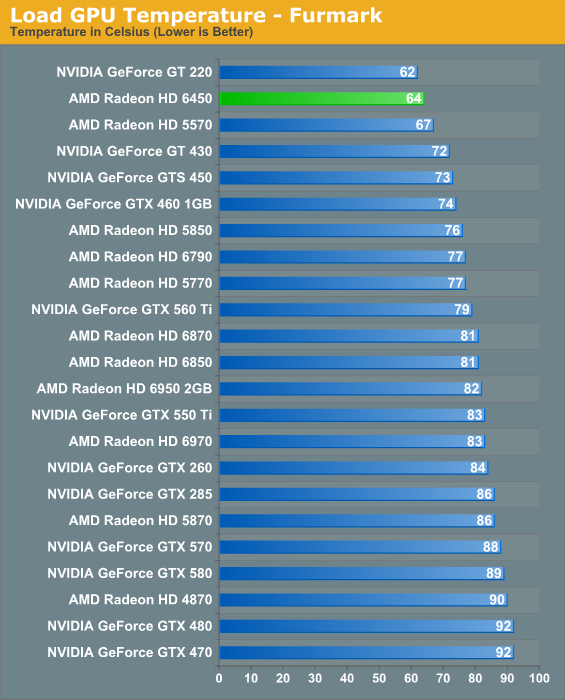 Under Furmark the GT 220 does manage to edge out the 6450, but the 6450 is still the coolest AMD card by 3C. It’s an interesting contrast from a couple of weeks ago when we were looking at dual-GPU monsters; 64C is practically lukewarm. 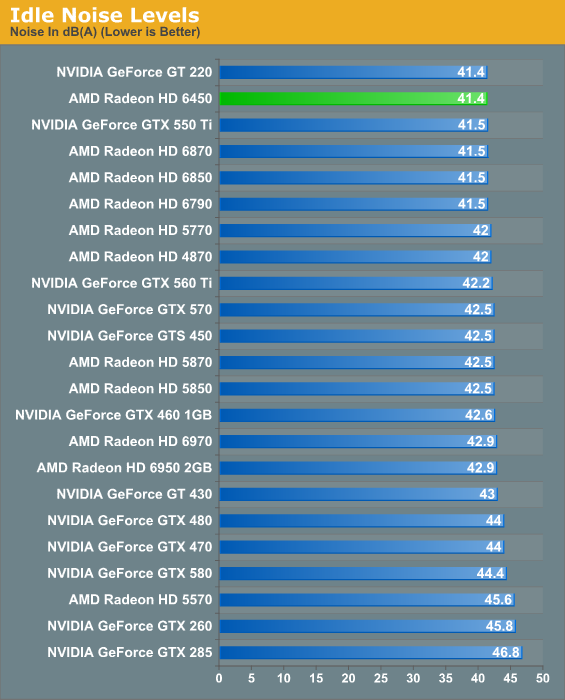 Under idle the 5570/6450 cooler is consistent with most other well designed coolers: it’s quieter than the noise floor of our testbed. 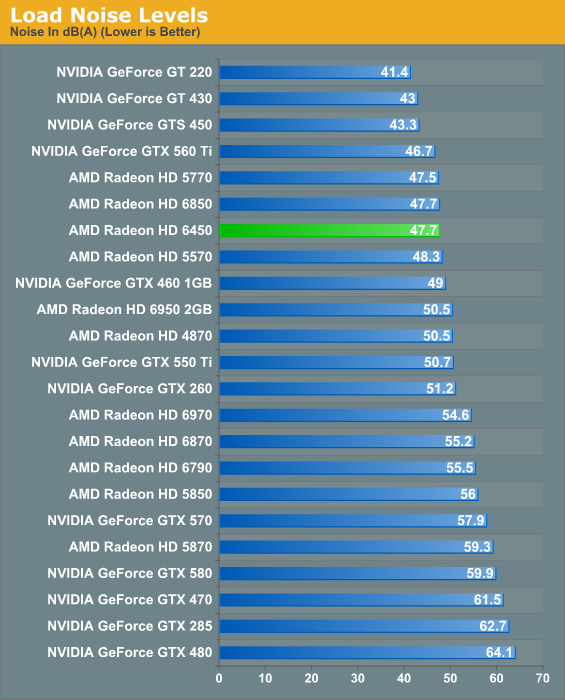 So the downside to the active cooler being used is that it’s not very quiet. If you want a quiet 6450 you’re better served by a passively cooled model for obvious reasons. But even if you want an actively cooled model, we strongly suspect you’ll see better coolers than the one on our sample. There’s no reason an active cooler needs to be more than a couple of dBA off of our noise floor—the GT 430 proves that.