I have to say, this is a lot better than I expected. Honeycomb feels a lot like Google’s take on iOS without sacrificing any of what makes Android unique. It’s a healthy combination of the appliance-like iOS without giving up any of the user facing customization & flexibility that Android users love. If you’re a die hard iOS user then I don’t think Honeycomb will tempt you, but if you’re undecided or you can appreciate both then Honeycomb may actually push you over towards Google.

I’m impressed with what Google has done with the UI. It’s a definite modernization of what Android is all about. There are elements of the Android UI we’re used to within Honeycomb but they aren’t all that prevalent at the surface. This looks and feels like a brand new OS for Google.

Am I more likely to use the Xoom than the iPad? Yes. The hardware is faster but more importantly, the software is better suited for multitasking. I’m a bigger fan of Honeycomb’s multitasking UI & notification system compared to the double-tap-home and passive notifications you get with the iPad and iOS. I can be more productive with the Xoom than I can be with the iPad as a result. I don’t believe Honeycomb’s UI is perfect by any means, it’s just more multitasking oriented than iOS is at this point.

There’s definitely room for improvement. The fact that there are still choppy animations within the OS is perplexing, I've asked Google for an explanation but I've yet to get an answer on that one.

I’d like to see the ability to scroll to reveal more apps in the task list for starters. I almost feel like we’re headed for an OS X dock-like setup where you have a permanent row of your active apps across a portion of the screen and you just tap to switch between them. This whole tapping twice to select a new app thing has to be short lived, it’s not an efficient use of fingers.

Elements of Honeycomb do feel rushed however. The stability of the OS/apps, the missing SD card support and random OS quirks come to mind. As a result I'd recommend waiting for at least the first Honeycomb update before pulling the trigger on one of these tablets.

As far as the Xoom itself is concerned, I like the hardware. It feels good, I’m less worried about it slipping out of my hands and onto concrete and it’s full featured. Battery life is clearly competitive with the iPad as well, which is impressive given how much faster the thing is by comparison. 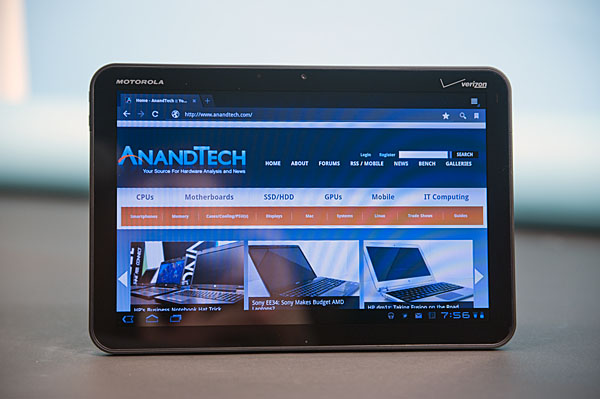 The screen isn’t terrible but it’s not the most impressive thing around, which is about the only complaint I have regarding the hardware. Had this been a $499 tablet I wouldn’t be too concerned but we’re talking about $800 here - I’d expect a better quality display at this price point, especially considering the price premium is really for 32GB of cheap NAND and smartphone hardware. I appreciate that we have a higher-than-iPad resolution, but I also want a higher-than-iPad contrast ratio.

Overall I am very excited to see Honeycomb tablets hit the market. Last year was mostly a waste when it came to non-iPad tablets, but this year looks to be quite the opposite.

This conclusion is obviously unfair to Apple given the rumored impending release of the iPad 2, but if I had to buy a tablet today it’d probably be the Xoom.

If I wasn’t insane however, I’d wait to see what was being announced on March 2nd first.