by Anand Lal Shimpi on February 14, 2011 9:45 AM EST
5 Comments | Add A Comment
5 Comments
HP stopped by a Qualcomm roundtable discussion to demonstrate the HP Veer, Pre 3 and TouchPad that it recently announced. Mithun covered the webOS event for us but this was the first time I was able play with the devices.
Everything HP announced at its event is powered by a Qualcomm SoC. The Veer runs webOS 2.2 and uses a MSM7230 with a single Scorpion core running at 800MHz. The primary take away from my experience with the Veer is that it is really, really tiny. 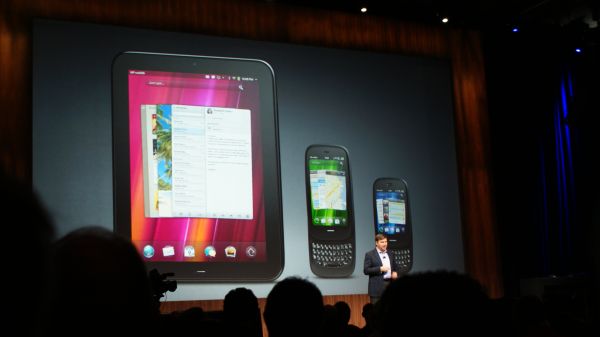 The Pre 3 felt very good and snappy. It's based on the highest clocked single-core ARM based SoC on the market today: Qualcomm's MSM8x55 running at 1.4GHz. Qualcomm mentioned that this is a standard part that's available to everyone - why HP ended up being the first to launch with it is unusual.
One thing I did notice in using all of the devices is that there's still room for performance optimization. There are occasional slowdowns or dropped frames in the UI. The HP representative present indicated that there's still a great deal of work to be done on both the hardware and software side before the devices ship.
The TouchPad is by far the most interesting as webOS just begs to be used on a larger screen. The UI is smooth although again I saw some indications that HP needs to do more performance tuning. Given what we saw with the original Pre, I am concerned but we'll have to reserve judgement until final hardware hits the market. Performance optimizing can take a long time and we're still months away from a launch.
Check out the video above for a quick look at the HP TouchPad.
Tweet
PRINT THIS ARTICLE
Comments Locked