ASUS bring a lot of innovation to the UEFI table over what I have seen from other vendors. The implementation of EZ mode (‘easy’ mode, for us Brits that pronounce that letter ‘zed’) gives the screen below on first entering the UEFI. At a glance, it gives vital motherboard information – CPU, speed, memory, temperatures, voltages, fan speeds, and boot order. The boot order is a great addition, allowing the user to drag-click the order they want. Also available is the three performance options – low power, standard, and performance. 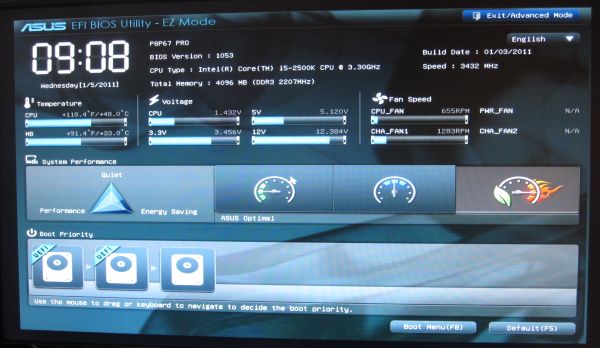 By clicking onto the advanced mode, we get a more BIOS-esque representation of all the motherboard features. The Ai tweaker provides all the overclocking tools we would expect, and more than you find in the Ai Suite in the OS. Features use either a text box for typing values, or a selection box for preset values. The user can utilise the mouse or the keyboard for either task. 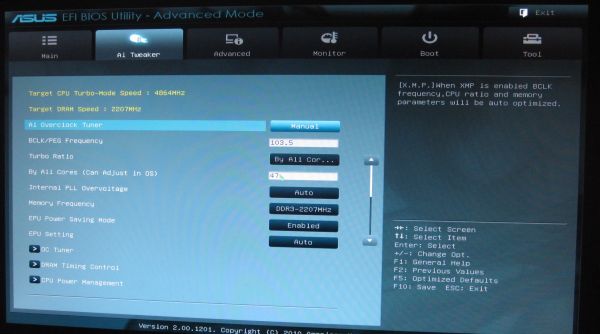 Elements such as enhanced sleep states appear under the Advanced CPU Configuration menu, where cores and ratios can be determined. In the Onboard Devices section, if you are not using the Marvell SATA ports, it is advised that this be switched off, to increase boot time by 1-2 seconds. 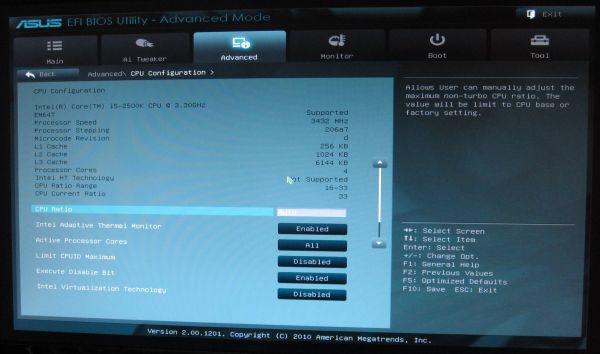 Fan controls are found in the Monitor tab, where a low limit fan RPM can be given and fan control can be switched between standard/silent/turbo/manual. In manual mode, you can adjust the upper and lower temperature of the fan and at which percentage speed it should run at those temperatures. 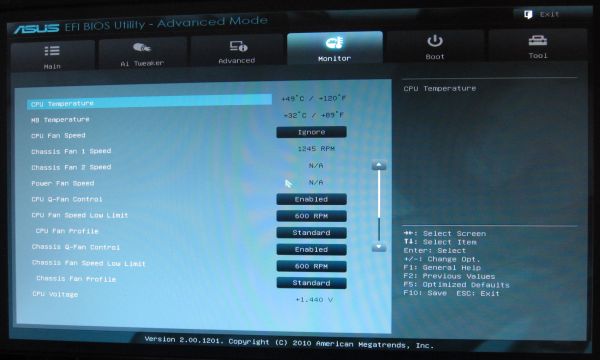 Users can specify advanced mode to be shown as soon as the UEFI is selected, and ten UEFI profiles can be saved. The UEFI can also be updated through the Tools tab if the latest file is supplied on a USB drive and plugged in before the ‘update’ option is chosen.

Overclocking on the P8P67 Pro was easy. The UEFI EZ mode offers a performance mode option, which on selecting, enabled the XMP profile of the memory, applied a 103 BCLK, and set the turbo limit to 42x, giving a 4.33 GHz overclock.

As the Ai Suite offers the ‘Auto Tuning’ option, I selected this in the OS and let the program do its thing. After a couple of reboots, and a BSOD, the OS booted into a screen showing a 43x multiplier at 103.5 BCLK (4.45 GHz), and attempted a series of stability tests, slowing increasing the BCLK by 0.5 every 30 seconds. At 105.5 BCLK, a BSOD screen appeared and seemed to crash halfway through, requiring me to reset the system physically. On the next boot, it was stated that the 43x103.5 overclock was applied and now usable. This system is likeable as it promises to adjust depending on how overclockable the processor is.

The downside is that the Ai Suite is quite conservative. I kept with the 103.5 BCLK and went into the UEFI. In advanced mode, adjusting the turbo ratio by one each time and rebooting led to a 46x multiplier (4.76 GHz) successfully passing stability tests. For 47x multiplier (4.86 GHz), I increased the PLL to 1.9V, CPU VCore to 1.42 V, and adjusted the short/long power limits to 150 W/130 W to get a successful stability test pass. This automatically set the memory to a command rate of 3T, so was set back to 1T manually. The 48x multiplier did not boot at this level, and I was not prepared to up the VCore or power limits any more. A 4.86 GHz overclock is very respectable!