It’s been officially announced for some time now, but the LG Optimus 2X looks to be the first smartphone to include Nvidia’s Tegra 2 dual-core SoC. We’ve seen Tegra 2 in the ViewSonic G already, but this is the first time we’ve played with it in a real live smartphone. Suffice it to say the Optimus 2X is definitely impressive.

First and most important is exactly how fast the Optimus 2X (and thus the smartphone Tegra 2 SKU) is - we’ve got a suite of benchmarking tools we’ve been running on devices and wanted to know exactly the same thing. Sadly, we aren’t allowed to publish those numbers quite yet, but suffice it to say the Optimus 2X is one of the fastest smartphones we’ve encountered. Browsing the web felt fast in both translation/panning, multitouch zooming, and actually loading pages. What applications we did play with on the 2X also felt fast to buttery smooth, as they well should have. Hopefully we'll get to post those soon after LG is done optimizing their build of Android on the 2X. 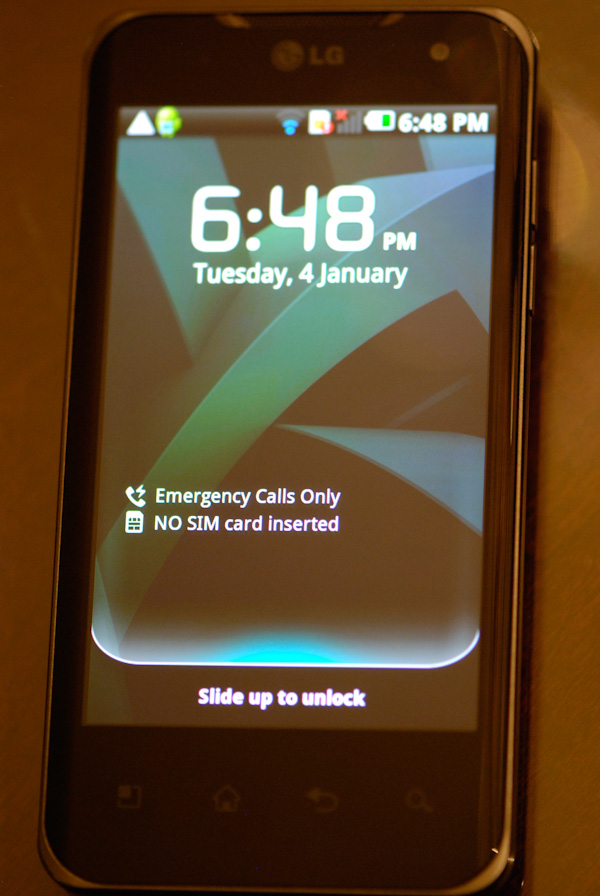 First up, the Optimus 2X we played with was running Android 2.2.1 and will launch with that, not Gingerbread (2.3) when it makes its way to store shelves. The 2X is upgradeable to gingerbread however, though there’s no word on a timetable for that update. LG and Nvidia both reiterated that the build of Froyo on the 2X we played with was very beta and unfinished - it rebooted twice while we played with it and while doing mundane things - but LG is determined to iron out performance and stability much more before launch. 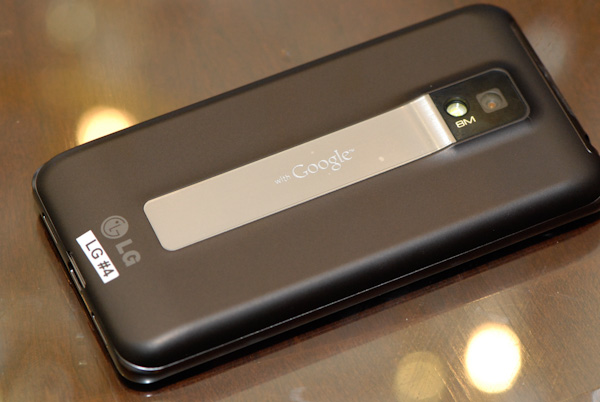 The software preload on the 2X is exactly the same as we’ve seen on other LG Android 2.2 phones - the LG Optimus One specifically. That includes LG’s own UI skin, different icons in the application launcher, and their own strict adherence to separating downloaded applications from preloaded applications among other nuances. All in all it isn’t sweeping, but stock Froyo (or better yet, gingerbread) is still what we’re wishing for.

The 2X’s industrial design is well done if somewhat understated. The rear side of the 2X reminds me of some of HTC’s earlier devices like the Touch Pro - it’s soft touch all around, dark grey with rounded edges. There’s a metal strip running the middle of the phone, and ports for the camera aperture and LED flash. I’m disappointed that LG made the same mistake HTC did by putting an extra layer of plastic between the actual first surface of the 8 megapixel camera and the outside world (something the Nexus One did that dramatically added to glare and provided a collection point for grime), but it isn’t killer. The back of the X2 peels off and reveals pretty standard fare for an Android device; 5.6 Whr Li-ion battery, microSD card slot, and SIM slot. There’s a small Droid 2-esque bulge for the camera which means the 2X doesn’t lay perfectly flat. 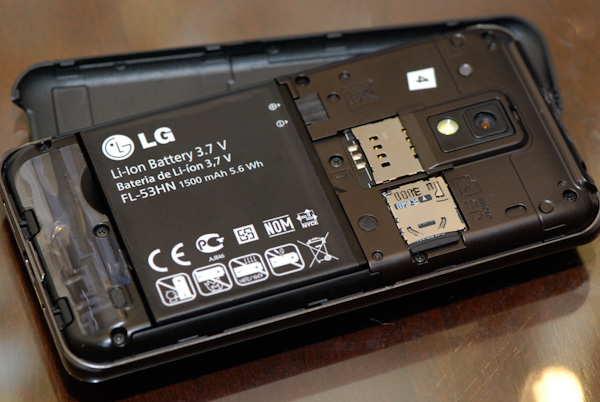 The front of the 2X is unbroken glass, with a gentle curve on each side. The 4” WVGA screen isn’t AMOLED, but rather LCD-TFT. The LCD seemed very contrasty and had good viewing angles at first glance. There’s a 1.3 megapixel front facing camera offset to the right of the earpiece. The usual set of android buttons is in the same order as the Optimus One, which means LG is at least keeping things consistent.

The sides of the 2X felt metallic and form a slight raised lip over the display. The 2X takes a definite nod from the iPhone with a speaker and microphone port at the bottom with similar shape and placement, in between is the microUSB port. At the top is the mini HDMI port cover, standard headphone jack, and standby/lock button. In terms of physical appearances and design choices, the 2X is pretty standard fare for a 4” Android smartphone. In the hands, the 2X felt beefy but not extremely heavy, and a lot like a high end device should.
Gallery: LG Optimus 2X Gallery
We didn’t spend enough time with the LG 2X to test 1080P video recording, hardware accelerated flash improvements, HDMI mirroring, or the image capture speed (which should be impressively speedy thanks to Nvidia's custom ISP), but will do so later during the show when we get more time with the hardware.
Tegra Optimized Smartphone Games: Tegra Zone Final Words
Tweet
PRINT THIS ARTICLE
POST A COMMENT