Assembling an HPTC in the GD04

When building in most cases, the assembly is fairly self-explanatory. The SilverStone GD04? Not so much. Installing my hardware in the GD04 actually resulted in my consulting the instructions that come with the case fairly frequently, and there's a reason why: SilverStone specifies a very specific order for installing components to keep cable routing fairly clean and easy. 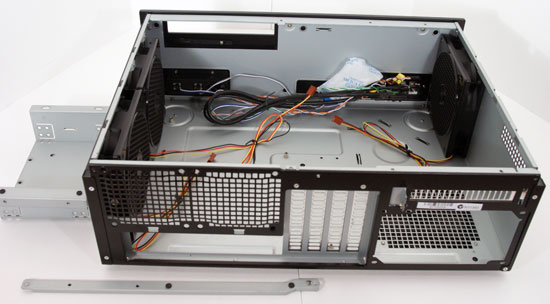 The first thing you'll need to do is remove the trays and the crossbar, and for sanity's sake the motherboard should probably go in before the power supply does. SilverStone actually includes rubber standoffs that adhere to the bottom of the power supply, as there's a centimeter or so worth of empty space between where the unit mounts and the bottom of the case. You'll want to connect whatever cables you can and install your expansion cards, because the next step involves putting the crossbar back in.

It's at this point that you should also note the 120mm fans all come with three-pin connectors and are intended to be plugged into and controlled by the motherboard. That would be fine, but most MicroATX boards don't come with that many fan control headers (to say nothing of MiniITX), not to mention how mediocre most motherboard implementations of fan control are. SilverStone includes an adapter that allows you to plug all three headers into a single molex connector, but that also means the fans are running at full bore all the time, and you'll see why that's a problem later on. Mercifully, the fans have built-in internal grates that keep bunched up cables from getting caught in the fan blades.

After you've replaced the crossbar, you'll need to mount the hard drive or drives into the mounting tray. The tray actually supports up to three drives total: two 3.25" and a 2.5". It's probably easiest to just install one big storage drive - this is a media center case after all. The 2.5" bay does make using an SSD as an OS drive easy, however. Installing the optical drive is also pretty simple, and there's some give on it so you can line it up properly with the opening in the front. I've read that one or two users on NewEgg had to shave off part of the tray opening for their builds, but the combination Blu-ray/HD-DVD drive I have fit perfectly and without issue. 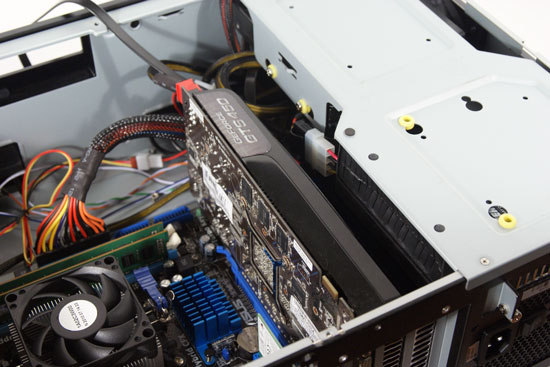 If you follow the instructions that come with the GD04, assembly actually goes fairly smoothly. The main problem is really just what a nuisance all the tiny screws can be. I understand going entirely toolless may be a convenience not available for a case this size designed for this task, but I can't help but feel like this whole ordeal could've been easier.