Last but not least as always is our look at the power consumption, temperatures, and acoustics of the Radeon HD 6900 series. This is an area where AMD has traditionally had an advantage, as their small die strategy leads to less power hungry and cooler products compared to their direct NVIDIA counterparts. However NVIDIA has made some real progress lately with the GTX 570, while Cayman is not a small die anymore. 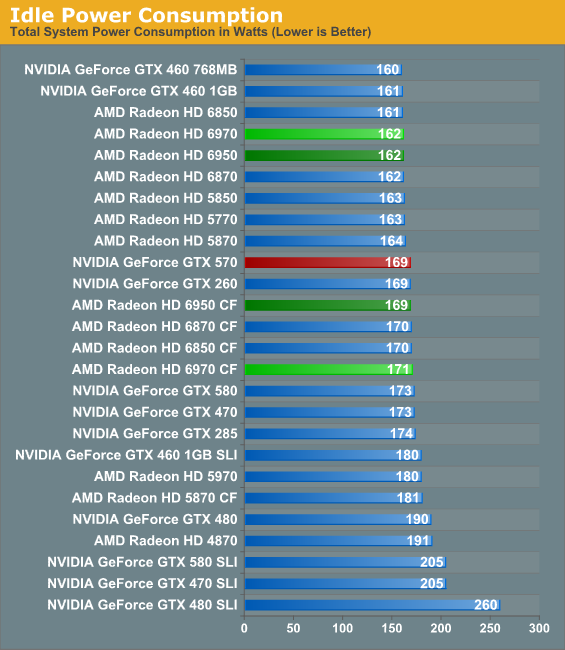 As we discussed at the start of our look at these cards, AMD has been tweaking their designs to take advantage of TSMC’s more mature 40nm process. As a result they’ve been able to bring down idle power usage slightly, even though Cayman is a larger chip than Cypress. For this reason the 6970 and 6950 both can be found at the top of our charts, running into the efficiency limits of our 1200W PSU. 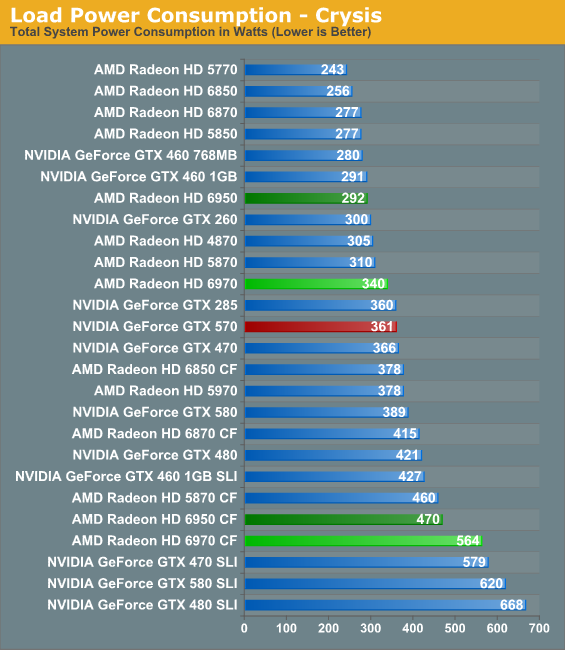 Under Crysis PowerTune is not a significant factor, as Crysis does not generate enough of a load to trigger it. Accordingly our results are rather straightforward, with the larger, more power hungry 6970 drawing around 30W more than the 5870. The 6950 meanwhile is rated 50W lower and draws almost 50W less on the dot. At 292W it’s 15W more than the 5850, or effectively tied with the GTX 460 1GB.

Between Cayman’s larger die and NVIDIA’s own improvements in power consumption, the 6970 doesn’t end up being very impressive here. True, it does draw 20W less, but with the 5000 series AMD’s higher power efficiency was much more pronounced. 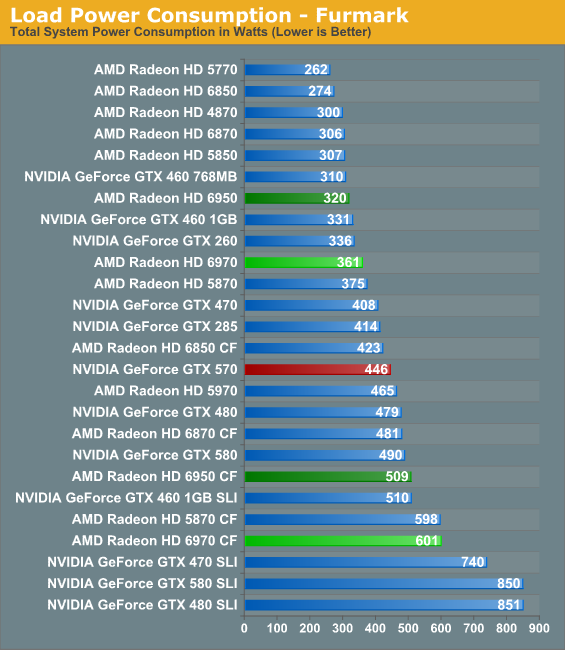 It’s under FurMark that we finally see the complete ramifications of AMD’s PowerTune technology. The 6970, even with a TDP over 60W above the 5870, still ends up drawing less power than the 5870 due to PowerTune throttling. This puts our FurMark results at odds with our Crysis results which showed an increase in power usage, but as we’ve already covered PowerTune tightly clamps power usage to AMD’s TDP, keeping the 6900 series’ worst case scenario for power consumption far below the 5870. While we could increase the TDP to 300W we have no practical reason to, as even with PowerTune FurMark still accurately represents the worst case scenario for a 6900 series GPU.

Meanwhile at 320W the 6950 ends up drawing more power than its counterpart the 5850, but not by much. It’s CrossFire variant meanwhile is drawing 509W,only 19W over a single GTX 580, driving home the point that PowerTune significantly reduces power usage for high load programs such as FurMark. 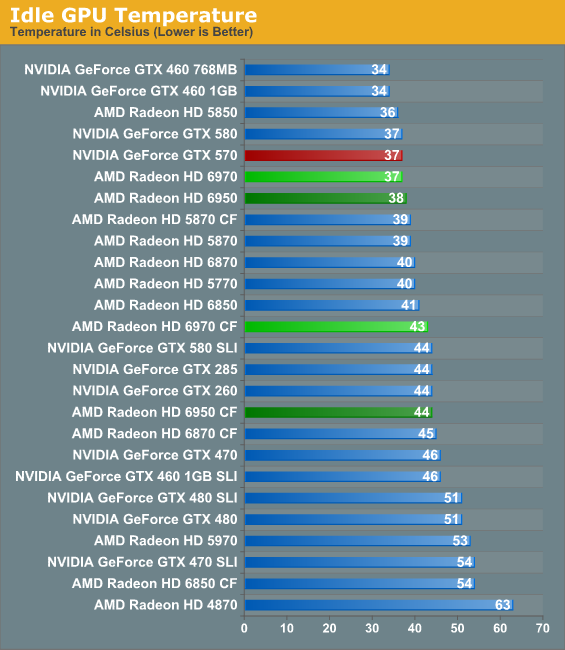 At idle the 6900 series is in good company with a number of other lower power and well-built GPUs. 37-38C is typical for these cards solo, meanwhile our CrossFire numbers conveniently point out the fact that the 6900 series doesn’t do particularly well when its cards are stacked right next to each other. 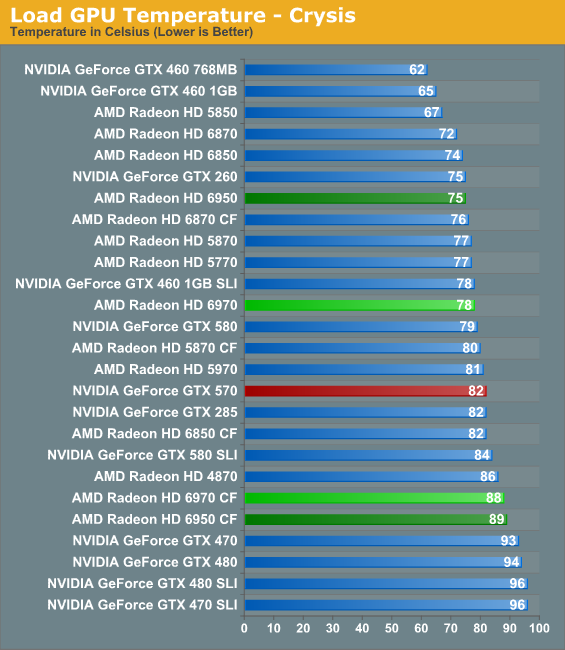 When it comes to Crysis our 6900 series cards end up performing very similarly to our 5800 series cards, a tradeoff between the better vapor chamber cooler and the higher average power consumption when gaming. Ultimately it’s going to be noise that ties all of this together, but there’s certainly nothing objectionable about temperatures in the mid-to-upper 70s. Meanwhile our 6900 series CF cards approach the upper 80s, significantly worse than our 5800 series CF cards. 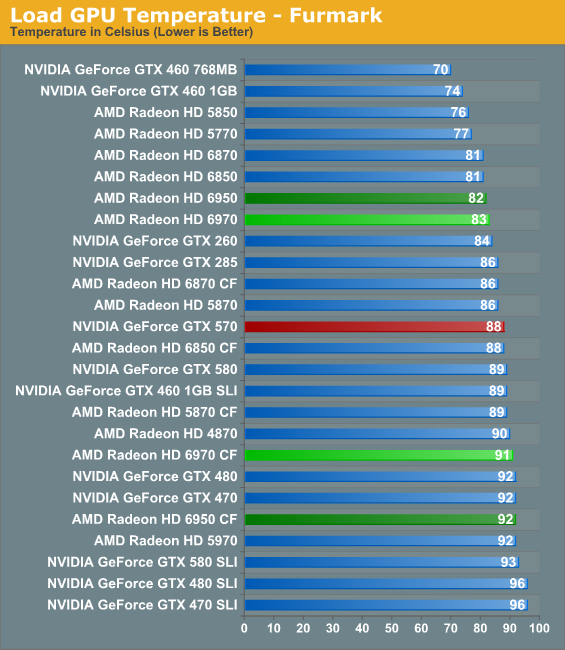 Faced once more with FurMark, we see the ramifications of PowerTune in action. For the 6970 this means a temperature of 83C, a few degrees better than the 5870 and 5C better than the GTX 570. Meanwhile the 6950 is at 82C in spite of the fact that it uses a similar cooler in a lower powered configuration; it’s not as amazing as the 5850, but it’s still quite reasonable.

The CF cards on the other hand are up to 91C and 92C despite the fact that PowerTune is active. This is within the cards’ thermal range, but we’re ready to blame the cards’ boxy design for the poor CF cooling performance. You really, really want to separate these cards if you can. 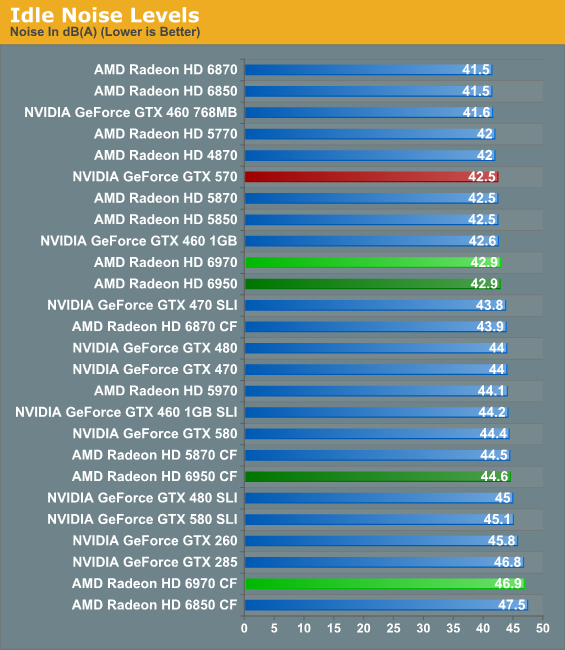 At idle both the 6970 and 6950 are on the verge of running in to our noise floor. With today’s idle power techniques there’s no reason a card needs to have high idle power usage, or the louder fan that often leads to. 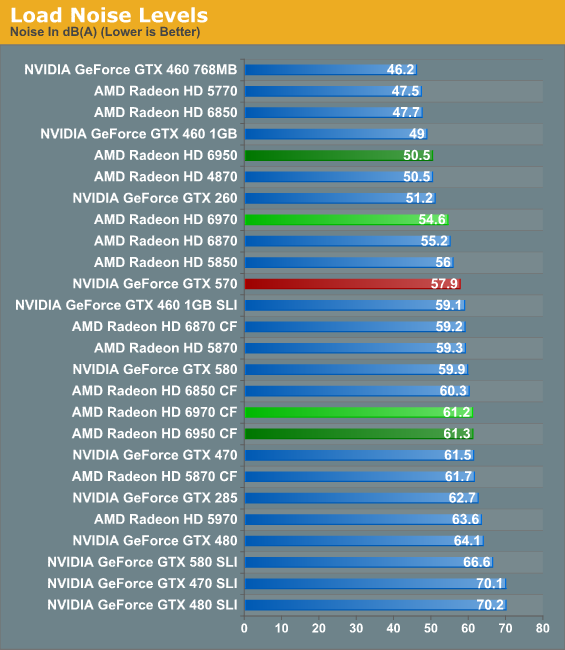 Last but not least we have our look at load noise. Both cards end up doing quite well here, once more thanks to PowerTune. As is the case with power consumption, we’re looking at a true worst case scenario for noise, and both cards do very well. At 50.5db and 54.6db neither card is whisper quiet, but for the gaming performance they provide it’s a very good tradeoff and quieter than a number of slower cards. As for our CrossFire cards, the poor ventilation pours over in to our noise tests. Once more, if you can separate your cards you should do so for greatly improved temperature and noise performance.