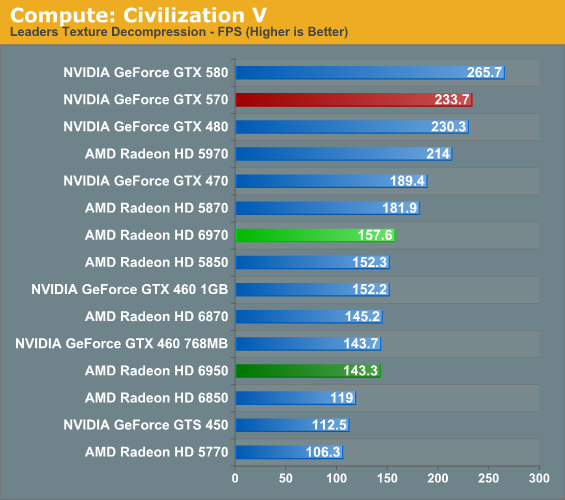 Civilization V’s compute shader benchmark has always benefitted NVIDIA, but that’s not the real story here. The real story is just how poorly the 6900 series does compared to the 5870. The 6970 barely does better than the 5850, meanwhile the 6950 is closest to NVIDIA’s GTX 460, the 768MB version. If what AMD says is true about the Cayman shader compiler needing some further optimization, then this is benchmark where that’s readily apparent. As an application of GPU computing, we’d expect the 6900 series to do at least somewhat better than the 5870, not notably worse. 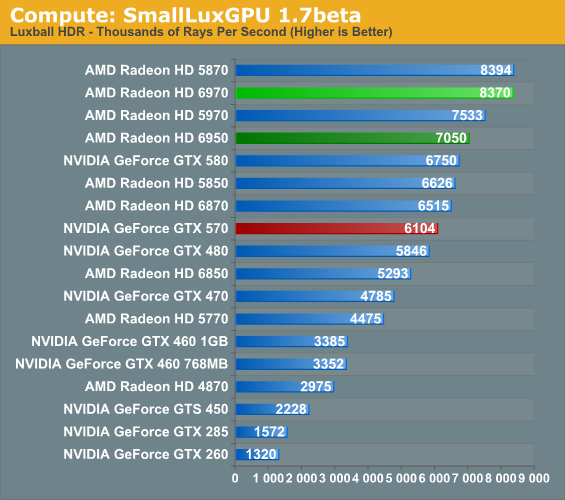 Unlike Civ 5, SmallLuxGPU’s performance is much closer to where things should be theoretically. Even with all of AMD’s shader changes both the 5870 and 6970 have a theoretical 2.7 TFLOPs of compute performance, and SmallLuxGPU backs up that number. The 5870 and 6970 are virtually tied, exactly where we’d expect our performance to be if everything is running under reasonably optimal conditions. Note that this means that the 6950 and 6970 both outperform the GTX 580 here, as SmallLuxGPU does a good job setting AMD’s drivers up to extract ILP out of the OpenCL kernel it uses.

Our final compute benchmark is Cyberlink’s MediaEspresso 6, the latest version of their GPU-accelerated video encoding suite. MediaEspresso 6 doesn’t currently utilize a common API, and instead has codepaths for both AMD’s APP and NVIDIA’s CUDA APIs, which gives us a chance to test each API with a common program bridging them. As we’ll see this doesn’t necessarily mean that MediaEspresso behaves similarly on both AMD and NVIDIA GPUs, but for MediaEspresso users it is what it is. 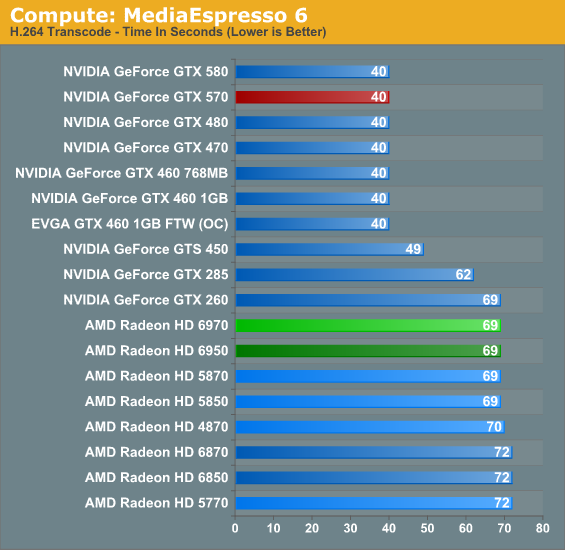 MediaEspresso 6 quickly gets CPU bottlenecked when paired with a faster GPU, leading to our clusters of results. For the 6900 series this mostly serves as a sanity check, proving that transcoding performance has not slipped even with AMD’s new architecture. 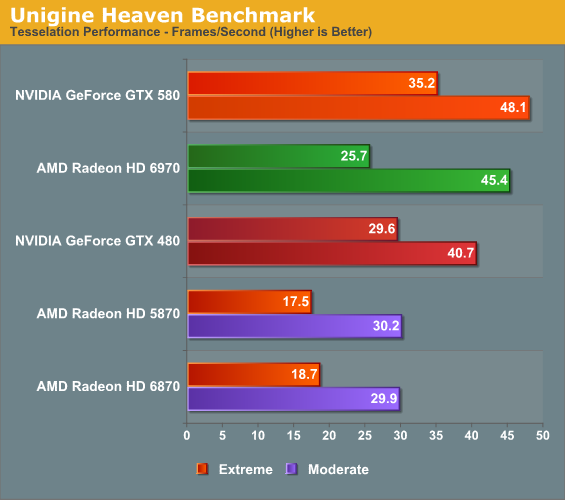 Since Heaven is a synthetic benchmark at the moment (the DX11 engine isn’t currently used in any games) we’re less concerned with performance relative to NVIDIA’s cards and more concerned with performance relative to the 5870. So with AMD’s tessellation improvements we see the 6970 shoot to life on this benchmark, coming in at nearly 50% faster than the 5870 at both moderate and extreme tessellation settings. This is actually on the low end of AMD’s theoretical tessellation performance improvements, but then even the geometrically overpowered GTX 580 doesn’t get such clear gains. But on that note while the 6970 does well at moderate tessellation levels, at extreme tessellation levels it still falls to the more potent GTX 400/500 series. 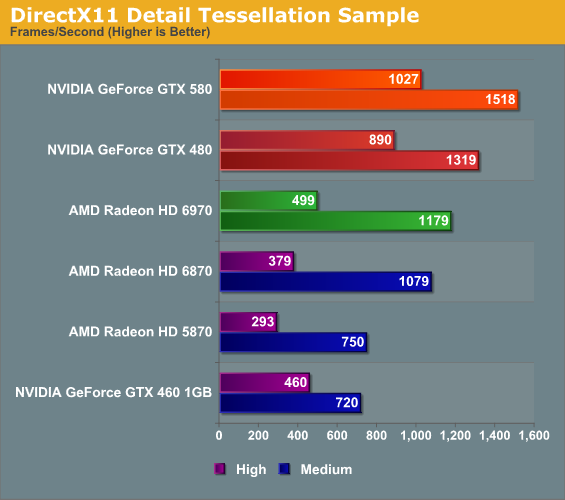 As for Microsoft’s DirectX 11 Detail Tessellation Sample program, a different story is going on. The 6970 once again shows significant gains over the 5870, but this time not against the 6870. With the 6870 implementing AMD’s tessellation factor optimized tessellator, most of the 6970’s improvements are already accounted for here. At the same time we can still easily see just how much of an advantage NVIDIA’s GTX 400/500 series still has in the theoretical tessellation department.