Back in October AMD launched the first 6000 series cards, the Barts-based Radeon HD 6800 series. At their core they are a refreshed version of the Cypress GPU that we saw on the 5800 series, but AMD used the opportunity to make some enhancements over the standard Cypress. All of these enhancements apply throughout the 6000 series, so this includes the 6900 series. As such for those of you who didn’t pay much attention to the 6800 series, we’re going to quickly recap what’s new in order to lay the groundwork for further comparisons of the 6900 series to the 5800 series.

The second change we saw with Barts and the 6800 series was AMD’s refined texture filtering engine. AMD’s texture filtering engine from the 5800 set new standards by offering angle independent filtering, but it had an annoying quirk with highly regular/noisy textures where it didn’t do a good enough job blending together various mipmaps, resulting in visible transitions between them. For the 6800 series AMD fixed this, and it can now properly blend together noisy textures. At the same time in a controversial move AMD tweaked its default filtering optimizations for the 5800 series and entire 6000 series, leading to these cards producing imagines subtly different (and depending on who you ask, subtly worse) than they were on the 5800 series prior to the Catalyst 10.10 drivers.

The third change we saw was the introduction of a new anti-aliasing mode, initially launched on the 6800 series and backported to the 5800 series shortly thereafter. Morphological Anti-Aliasing (MLAA) is a post-processing filter that works on any (and all) images, looking for high contrast edges (jaggies) and blending them to reduce the contrast. Implemented as a compute shader, it works with all games. As it’s a post-processing filter the results can vary – the filter has no knowledge of depth, polygons, or other attributes of the rendered world beyond the final image – so it’s prone to blending everything that looks like aliasing. On the plus side it’s cheap to use as it was originally designed for consoles with their limited resources, so by not consuming large amounts of memory & memory bandwidth like SSAA/MSAA it usually has a low performance hit. 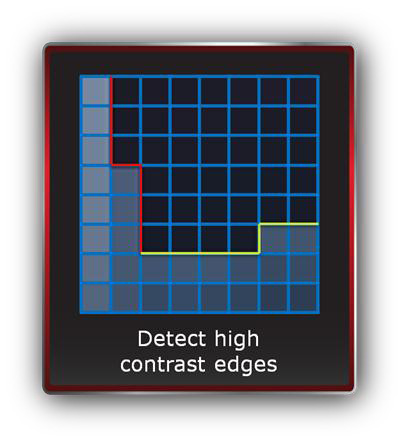 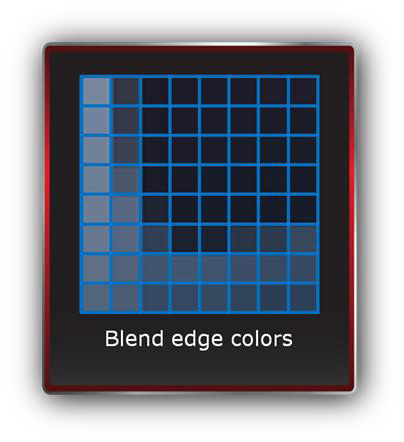 Last but not least, AMD made a number of changes to their display hardware. The Universal Video Decoder (UVD) was upgraded to version 3, bringing full decode support for MPEG-2, MPEG-4 ASP, and H.264 MVC (packed frame video for 3D movies). For the 6900 series this is not of great importance as MPEG-2 and MPEG-4 ASP are low complexity codecs, but it does play an important role for AMD’s future APU products and low-end GPUs, where offloading these low complexity codecs is still going to be a big relief for the slower CPUs they’re paired with. And on that note the first public version of the DivX codec with support for UVD3 will be shipping today, letting 6800/6900 series owners finally take advantage of this functionality. 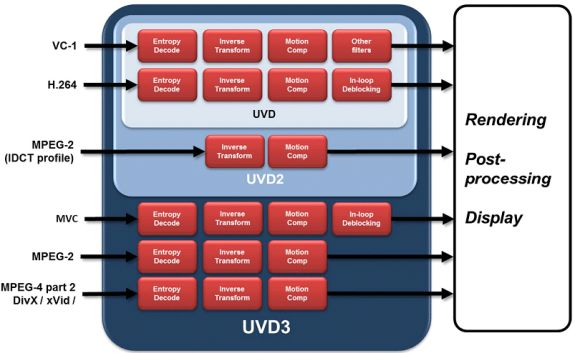 The second of the major display changes was the addition of support for the DisplayPort 1.2 standard. DP1.2 doubles DisplayPort’s bandwidth to 21.6Gbps, finally giving DisplayPort a significant bandwidth lead over dual-link DVI. With double the bandwidth it’s now possible to drive multiple monitors off of a single root DisplayPort, a technology called Multi Stream Transport (MST). AMD is heavily banking on this technology, as the additional bandwidth coupled with the fact that DisplayPort doesn’t require a clock source for each monitor/stream means AMD can drive up to 6 monitors off of a single card using only a pair of mini-DP ports. AMD is so cutting edge here that like the 6800 series the 6900 series is technically only DP1.2 ready – there won’t be any other devices available for compliance testing until 2011.

While all of these features were introduced on the 6800 series, they’re fundamental parts of the entire 6000 series, meaning they’re part of the 6900 series too. This provides us with a baseline set of improvements over AMD’s 5800 series, on top of the additional improvements Cayman and AMD’s VLIW4 architecture brings.