I’ve already touched on a lot of what there is to be said about the Nexus S display. It’s an unbroken piece of gently curved glass, and underneath is the same 4” Super AMOLED display we saw on the Galaxy S line of phones. Pentile is still here, love it or hate it - best I can tell it literally is the same thing as in Galaxy S devices. Brightness is a little better on the Nexus S, but you still get perfect blacks that look awesome on the new black-heavy Gingerbread UI.

The Nexus S display is indeed excellent. We’ve got full viewing angles galleries and uniformity shots. Notably, there were no color or luminance uniformity issues we could pick out on our Nexus S - it appears flawless. Again the banding in our RGB gradient image is due to the gallery application color depth, which remains unchanged sadly. 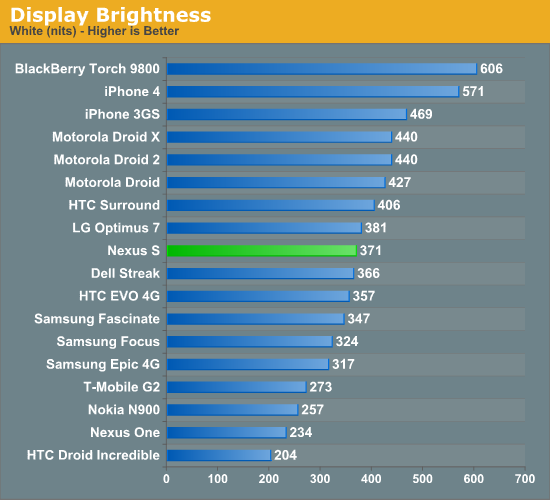 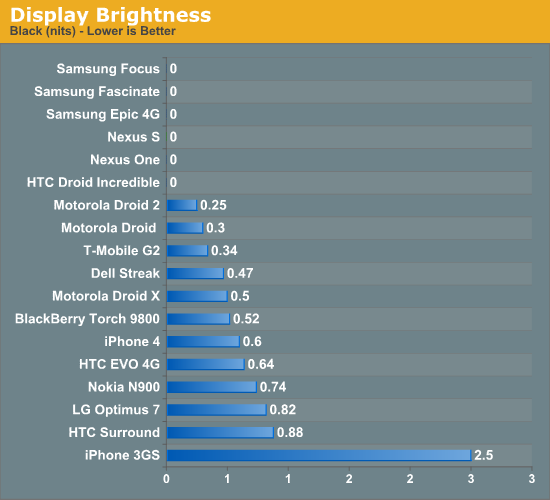 The Nexus S also gets an oleophobic coating, something the iPhone 3GS got a lot of press with. I found that after a few months and wipings, the 3GS lost its amazing ability to repel oils. So far the Nexus S has withstood copious amounts of finger and face grease, coming clean with a quick brush on the shirt or lens cloth.

The curved surface is more of an aesthetic extra than an ergonomic feature, but it still is impressive that this is possible. The nice thing about having the front face in compression (from the concave shape) is that scratches probably don’t affect the glass’ structural integrity nearly as much as they would in tension. Glass is just stronger in compression rather than tension - the reason is primarily because cracks don’t propagate as well on surfaces in compression as they do in tension. Viewing angles on the Nexus S are very good, again the curvature is small enough that it doesn’t adversely impact vertical viewing angles.

Capacitive touch was always a major problem for me on the Nexus One. Anand noted it in his Nexus One review, and I experienced it firsthand with mine. I exchanged it and got one some months later with much better response and far fewer false touches, but compared to other flagship devices something always just felt wrong. Luckily the Nexus S has no such issues - touch is flawless, multitouch is excellent as well.