There are a lot of environmental constrains that the Kinect imposes, but the system actually works extremely well. Inside the manual and throughout the literature distributed with Kinect are notices about reducing ambient sunlight in the room you’re using the Kinect. At the same time, you need ambient light for the RGB color camera to work - this seems somewhat confusing until you consider that sunlight also contains spectral components at the same wavelength the Kinect operates at. Lots of ambient sunlight thus decreases the visibility of those spots on the room and players, and could conceivably make depth detection much worse. That sort of reminds me how the Wii sensor bar could be emulated with candles some distance apart atop the television, or how playing with the Wii next to a fireplace could easily make the system glitch out.

In practice, I never once noticed problems with depth detection on Kinect that I’d blame on ambient noise from stray light sources - even in a room with, yes, a huge fireplace (hey, it’s a reasonable test). The more important consideration actually turns out to be the relatively poor sensitivity of the RGB camera, which requires lots of room lighting to get decent framerate or augment facial detection. 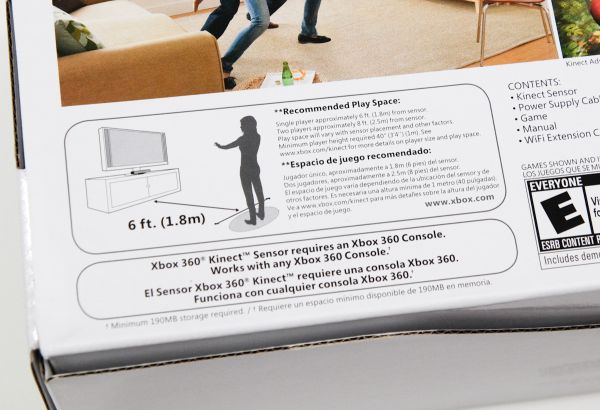 The more important consideration for playing space is play space size - you need a big room to use Kinect. On the back of the Kinect packaging, Microsoft notes that a distance of 6’ from TV to players is requisite at minimum. After a lot of testing, I’d say 6’ is optimistic, even for one person. In actuality I’d say 9’-12’ is closer to what is optimal, especially if you want to play with a second person, and later inside games you’ll be told as much. 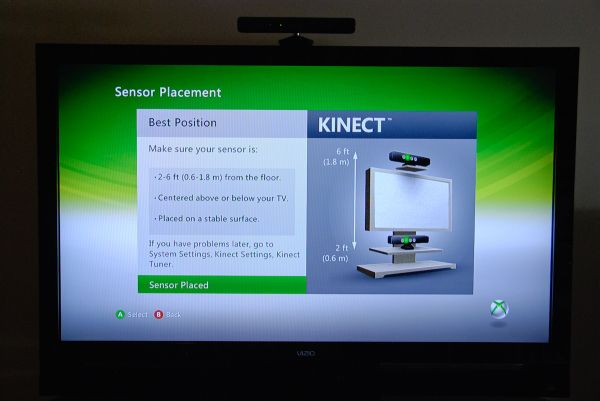 Sensor position itself makes a lot of difference here - Kinect can go either on top or below the TV, and Microsoft recommends anywhere 2’ - 6’ off the ground. Ultimately, the bar is that Kinect needs to be able to see your entire person - feet, head, and some distance around you to move, jump, and flail your arms around inside. If you place the Kinect on an entertainment center table below the TV, the hazard is that the depth of the table will block part of the depth image at the bottom. I had much more success with placing the Kinect atop TVs, especially when you encounter LCDs and pasmas of the wall-mounted sort.

The first area I tested was my living room, which is reasonably large (or so I used to think), and I played with about 7 feet away from the sensor. I moved a coffee table, unfortunately moving my couch is prohibitively difficult, and I didn’t have space to get rid of it. I was able to play with two people, but it was a bit cramped, and I felt like I needed more distance from the TV the whole time. 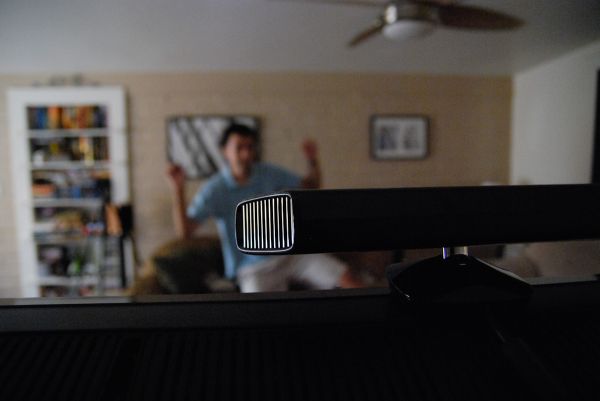 See that above me? Yeah, it's a ceiling fan.

The consideration I didn’t think of is what’s above. Needless to say, you need space to flail your arms around, especially if you’re tall. Above me within arm’s reach is a ceiling fan. That’s a serious problem if you get excited and jump with your arms above your head, as my girlfriend experienced a few minutes into our first session of Kinect Adventures. Ultimately, I can’t blame Kinect for my living room being small, but you need to be aware of the space constraints - Kinect won’t work in dorm rooms or tiny play areas, but does work with at least average sized living rooms. It’s entirely constrained by the field of view of the sensor and CGH, and admittedly it’s hard to make very wide angle CGH systems with good uniformity and repeatability.

I later tried Kinect in a much larger space with more than 12’ of space behind a wall-mounted plasma, with the Kinect mounted atop the display about 6.5’ above the ground. I had much more success here both with detection of my feet, and two-player space. 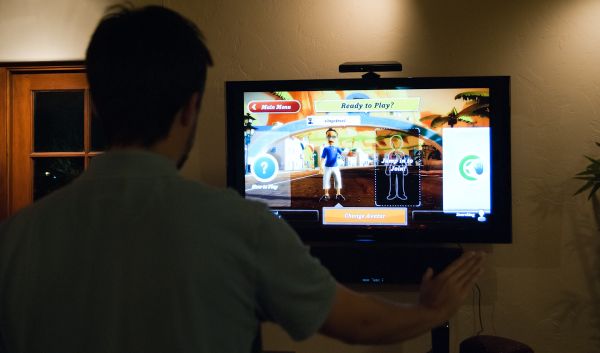 If you’re running out of space or are playing with just barely enough, the problems that arise are what you’d expect. Kinect won’t see your feet very well, or miss your hands, but thankfully most of the time you’re given feedback visually on the display that you need to move back into the optimal position.

The interesting bit of the Kinect space story is that closer to the sensor, you get better depth resolution at the cost of having less space to work in, yet far away you sacrifice depth resolution for more working area. It’s a simple consequence of field of view and the angular separation of those points in the CGH image. Prime Sense advertises that their reference design has a depth resolution of 1 cm at two meters from the sensor. As you move further away, that depth resolution gets worse (larger).

The final note is that I’ve actually noticed that clothing choice makes a difference. In fact, there are a few warnings in the literature shipped with games which notes that some clothing choices may make detection hard. I never had serious issues being detected outside of one special combination of cargo shorts and a specific footwork-heavy move in Dance Central, but more on that later. Common sense applies here, and essentially you need to look human and have some depth contrast visible for Kinect to detect your limbs.