On paper, the new 13-inch MacBook Air shouldn’t be any faster than the old 2008 MacBook Air - at least in CPU bound tasks. The 2010 model gets a faster GPU but the CPU is literally the same 1.86GHz Core 2 Duo. Memory sizes and speeds haven’t changed either. While the SSD is faster, if you’re running a CPU bound benchmark there shouldn’t be any performance difference. If you assumed the same thing I did, you’d be very wrong.

I turned to our Handbrake H.264 encode test to verify my sanity:

Once again, a similar situation. The old MBA is actually slower than the new 11-inch, despite the advantage in CPU speed.

It looks like what we’ve stumbled upon is a combination of Apple aggressively throttling the clock speed of the older MacBook Air CPUs to meet thermal requirements, and the CPUs used in the new MacBook Airs being far better behaved from a voltage/power consumption standpoint.

The 45nm process these Core 2s are built on is as mature as it’s going to get. I’m guessing yield on these parts is as high as can be and as a result, power consumption is probably consistently lower than the original 1.86GHz parts Apple shipped back in 2008. The peak thermal specs themselves haven’t changed, but the actual power characteristics have. 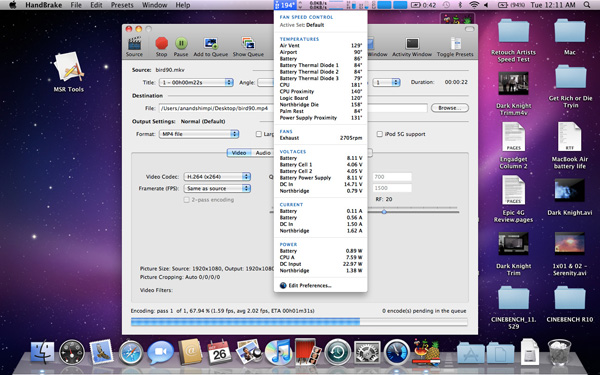 The 2008 MacBook Air under Load

Maximum temperature, at least reported by the MBA’s sensors, isn’t any lower on the new 13-inch than the 2008 I compared it to. Both CPUs hit roughly 84C (183F) under full load. But look at what happens to the chips after a minute at that load:

As a result, even the 11-inch MacBook Air will probably end up being as fast, if not faster than the 2nd generation 2008 13-inch MacBook Air. And our performance results confirm that:

You'll notice the less CPU intensive tasks are quicker on the old 13-inch system as the CPU isn't able to get hot enough to trigger Apple's throttling. The single threaded Cinebench test is the best example of this. The 26% performance advantage jibes with the 33% increase in CPU clock speed (it's actually a little low, most likely because the old CPU still isn't running at full speed even in this test). But now look at the heavier tests - the multithreaded Cinebench test and the Quicktime encode. Both of these stress both cores and drive TDP up, which forces Apple to pull clock speed back down. We wondered how Apple was able to cram such a high speed CPU into such a thin chassis as early as it did, now we know.

In practice I found the 2008 13-inch MBA launched applications quicker (short bursts of full clock speed), but after prolonged use or completing CPU intensive tasks it was tough to tell apart from the new 11-inch. What's even more troublesome is that Apple's aggressive clock throttling went relatively undetected until now. This is something I'm going to have to devise tests for and pay more attention to in future reviews. Sneaky, Steve, sneaky.

The slits are smaller than they were on the old chassis, which means moving air through them at the same rate sounds louder than before. 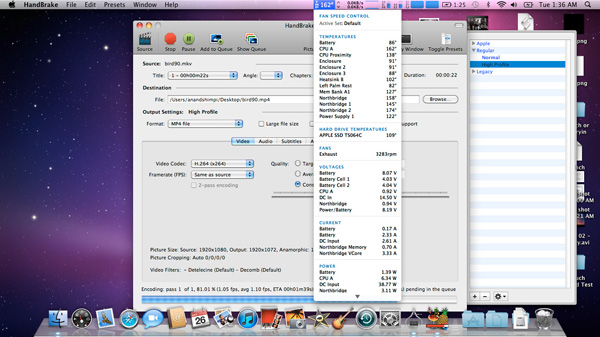 The 11-inch MacBook Air under Load

The CPU in the 11-inch model, even when under heavy loads, likes to stay at or below 72C (162F). At that temperature, the internal fan doesn’t spin above 4000 RPM (usually down below 3400). The 13-inch MacBook Air however is far more likely to generate noise. Running our simple Handbrake test the CPU will peak at over 82C (~180F) and the system’s internal fan will ramp up to over 6K RPM to compensate. Not only does the chassis get hot, but the fan gets audible. It’s still too small of a fan to really be considered loud in the grand scheme of things, but it’s loud enough to be annoying. 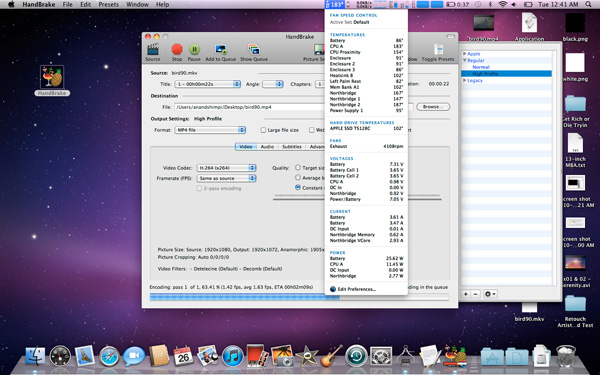 The 13-inch Macbook Air under Load

Even casual use can ramp up temperatures pretty quickly. Just having a few websites open in the background that use Flash or other CPU intensive elements can slowly cause the MBA’s internal temperatures to rise. And now you’re beginning to see why Apple doesn’t install Flash on these things by default.

The danger zone is the upper left corner of the system, near the hinge. There’s only a single fan that cools both the CPU and GPU in the Air’s very tight enclosure. This is where that fan sits.