What’s In a Name?

GPU naming is rarely consistent. While NVIDIA is usually the biggest perpetrator of naming confusion or suddenly switched names AMD does not have a clear record either (the Mobility 5100 series comes to mind). However we’re not sure there’s precedent for AMD’s latest naming decision, and there’s really no stepping around it. So we have a few thoughts we’d like to share.

Since the introduction of the Radeon 3870 in 2007, 800 has been the series designation for AMD’s high-end products. The only time they’ve broken this is last year, when AMD ditched the X2 moniker for their dual-GPU card for the 5900 designation, a move that ruffled a few feathers but at least made some sense since the 5970 wasn’t a true 5870 X2. Regardless, the 800 series has since 2007 been AMD’s designation for their top single-chip product.

With that naming scheme come expectations of performance. Each 800 series card has been successively faster, and while pricing has been inconsistent as AMD’s die size and costs have shifted, ultimately each 800 series card was a notable step up in performance from the previous card. With the 6800 this is not the case. In fact it’s absolutely a step down, the 6800 series is on average 7% slower than the 5800 series. This doesn’t mean that AMD hasn’t made enhancements to the card –we’ve already covered the enhanced tessellation unit, AA/AF, UVD3, and other features – but these are for the most part features and not performance enhancements. 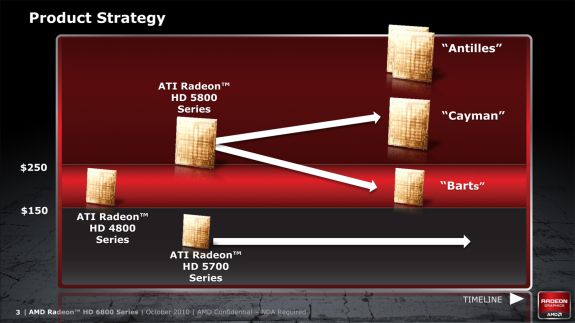 Today AMD is turning their naming scheme on its head by launching these Barts cards with the 6800 name, but without better-than-5800 performance. AMD’s rationale for doing this is that they’re going to be continuing to sell the 5700 series, and that as a result they didn’t want to call these cards the 6700 series and introduce confusion. Furthermore AMD is trying to recapture the glory days of the 4800 series, where those parts sold for under $300 and then quickly under $200. It wasn’t until the 5800 series that an 800 series card became outright expensive. So for these reasons, AMD wanted to call these Barts cards the 6800 series.

We find ourselves in disagreement with AMD here.

We don’t have a problem with AMD introducing the 6 series here – the changes they’ve made, even if not extreme, at least justify that. But there’s a very real issue of creating confusion for buyers of the 5800 series now by introducing the 6800 series. The performance may be close and the power consumption lower, but make no mistake, the 5800 series was faster.

Ultimately this is not our problem; this is AMD’s problem. So we can’t claim harm per-say, but we can reflect on matters. The Barts cards being introduced today should have been called the 6700 series. It would have made the latest rendition of the 700 series more expensive than last time, but at the same time Barts is a very worthy upgrade to the 5700 series. But then that’s the problem for AMD; they don’t want to hurt sales of the 5700 series while it’s still on the market.