We measured power draw at the outlet as well to see just how much electricity the X7200 is using. As you would expect from the battery life figures, it's right there with midrange desktops for idle power: around 105W. With a full load running, we measured normal peak power draw of up to 350W, which is higher than the rated output of the power brick. However, we need to account for efficiency, so if the power brick is 80% efficient we could "safely" draw up to 375W from the wall. But who cares about safety, right? 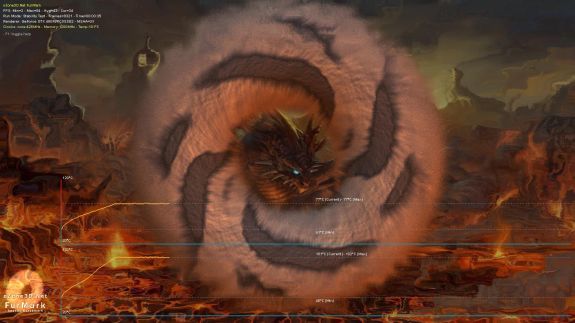 We fired up Furmark to see what would happen, and the results were a bit scary. Upon initialization, Furmark caused the X7200 to use around 325W with the GPUs starting at just 41/50C; but then power draw, temperatures, and noise levels kept going up...and up...and up!. The X7200 finally reached a maximum power draw of 410W before some sort of protection kicked in and the power brick shut down—and rendering performance drops from 40FPS to around 5FPS in Furmark. Unplugging the power brick from the wall and then plugging it back in restored normal performance, but then the cycle would repeat. Note that for this to occur, we had to use the Windows "High Performance" profile as well as setting the Clevo power utility (called "Power Conservation Mode" and accessible via a system tray icon) to "Performance" or "Balanced", the latter being the key. If we set the Clevo utility (in the system tray) to "Energy Star", power draw never exceeded 350W, though it does appear to limit system performance if power draw gets too high. Some have called Furmark a "power virus", and we would agree that the load it places on GPUs is unrealistic compared to anything else we've encountered. Running games, we spiked at a maximum power draw of "just" 310W, which is far more reasonable.

Update, 10/16/2010: One of the readers commented that another site was reporting issues with power draw exceeding specs and causing the power brick to shut down when running games, specifically Mafia 2. I spent most of yesterday playing Mafia 2 on the X7200 with no issues, at maximum detail with and without PhysX enabled (four hours on each setup). Power draw at the wall reached a maximum sustained value of 335W, with a few instances where it briefly hit 340W. That should still be under the maximum 300W rating, assuming 80% efficiency, but anything more (i.e. a minor overclock of the CPU) would push the system over the edge.

As you might expect, all this power produces a fair amount of heat and noise. Actually, we should clarify that and say that the temperatures aren't all that bad, all things considered, but noise levels can be extremely annoying. At idle, temperatures on the top of the notebook ranged from 23C (just above ambient) to as much as 34C. The left side and top side of the system tend to be a bit warmer than the right/bottom sides. Underneath, temperatures were similar with a range of 23-33C. After loading up 3DMark06 and letting it loop for an hour, temperatures were higher but not quite as extreme as we've seen in other notebooks. The keyboard and palm rest temperatures climbed to a maximum of 39C, with the back of the notebook (above the exhaust ports) showing temps of up to 42C. Underneath, temperatures were actually slightly lower; the left side ranged from 29 to 35C, the middle from 29 to 37C, and the right from 24 to 37C—with the highest temperatures always near the rear of the unit.

As for the power brick, we registered a maximum external temperature on the casing of 52C, with most of the surface in the 46-49C range. That was again using Furmark, and you can knock those figures down about 10C for regular use. Given the 300W rating, many probably expected it to get hotter, but the sheer size of the brick keeps it cooler than many other power adapters. I know in the past I've had DTR power bricks get a lot hotter, including an old Alienware M5790 that would actually drain the battery while under a heavy load that went so far as to have a fan in the power brick. But that was back in the days of 60-70% efficiency PSUs, and we'd guess this power brick is closer to 80 Plus territory (or at least, we hope it is). It's still a massive power brick to lug around, but at the same time a 3-pound brick and 12-pound notebook is lighter and far easier to transport than even a mini ITX system plus keyboard and monitor. 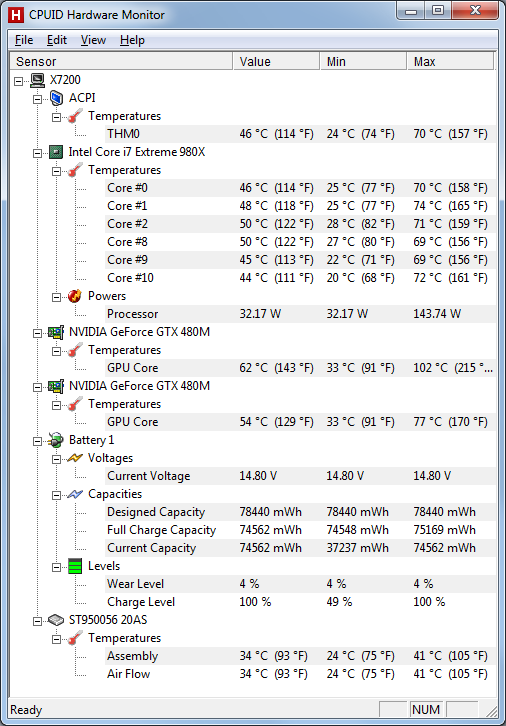 Here's a look at the system temperatures—after running Furmark for 30 minutes with the "Energy Star" mode activated. GPU temperatures top out at a toasty 102C for the primary GPU and only 77C for the secondary, while CPU temperatures max out at 69-74C. Note that we also ran Cinebench to stress the CPU, as Furmark doesn't hit the CPU that much. The HDD topped out at 41C, which is perfectly acceptable. When we skip Furmark and use games and other applications, the maximum GPU temperature on GPU1 drops to 92C, again illustrating how much more demanding Furmark is compared to normal games.

While the external temperatures were actually quite impressive, given the amount of power stuffed into the chassis, they come at the cost of noise levels. The idle noise level isn't too bad, registering just above the 30dB limit of our SPL meter at 33dB (from a distance of 12" above and in front of the notebook). Start to do anything remotely taxing and you'll hear the fans begin to spin up; normal usage will usually generate 33-38dB, but high CPU loads can bump the noise up as high as 47dB. Yes, that's very loud and annoying and can easily be heard from another room in the house. If you play a modern game, noise will also register in the 40-47dB range, with fan speeds ramping up and then slowing down on a regular basis. Under Furmark, we measured our worst-case scenario with the primary GPU fan speed at 100% and 50dB, while the secondary GPU fan would continually oscillate between a lower speed (around 13 seconds) and maximum speed (5 seconds). Noise would likewise go between 50dB and 53dB.

Again by way of comparison, the X7200 is substantially louder than any of my desktops, the worst of which puts out a steady 45dB (at 12"). A well-built gaming desktop (i.e. my own new system, shown in the gaming benchmarks a couple pages back) will idle at around 30dB and get up to 40dB at full load. In other words, plan on wearing headphones if you play games and don't want to hear the X7200's fan noise.