Overall, we've seen a dramatic boost in core counts across the entire mobile family. What we haven't seen is much in the way of bandwidth improvements. How this will affect actually gaming remains to be seen, but NVIDIA is claiming average performance increases of around 40% compared to the older 300M series. We heard 30% faster performance with 480M versus 285M when that part launched in May, and we didn't quite get that in all games, but newer titles did tend to benefit more than older games.

There are other benefits that NVIDIA is touting with the new GPUs, some new but mostly this is stuff we've seen before. Front and center is Optimus Technology, with six of the seven major OEMs now shipping (or preparing to ship) Optimus enabled laptops. If we want to name names, Acer, ASUS, Dell, Lenovo, Samsung, and Toshiba have or will shortly have Optimus laptops; we'll let you fill in the missing blank. While there will always be a market for discrete-only laptops, the switching technology makes a lot of sense for midrange GPUs. Obviously you need a CPU with an IGP, which means no one is likely to do a high-end Optimus notebook just yet, but once Sandy Bridge launches the situation could (re: should) change. While Fermi was a power hungry beast, this is less of a concern on midrange and lower laptops. They'll need to be able to cool the GPUs when gaming, but at least on battery power you won't have to worry about the GPU sucking down watts.

NVIDIA is also touting the benefits of their CUDA GPUs again, which is hardly surprising. With more users doing HD video clips (i.e. with the latest smart phones), a way to quickly convert those videos into online friendly formats is certainly useful. Badaboom isn't going to win an award for the highest quality encodes, but if you're uploading to YouTube (where your video gets re-encoded anyway) it gets the job done. Needless to say, all of these new 400M GPUs should tear through such encodes much faster than even desktop CPUs. Retouching photos in Photoshop CS5 also gets a boost to speed, there's tons of web content moving to GPU acceleration (HTML 5 Video, Flash 10.1, WebGL, and Scalable Vector Graphics for example), and Internet Explorer 9 along with Firefox 4 and Chrome 7 will all have GPU acceleration. Intel's HD Graphics and upcoming Sandy Bridge IGP may struggle in comparison with a few of those areas, but we'll withhold judgment until we get hardware for testing.

And of course, there's the games. The slowest of the slow 400M GPUs should still pack quite a wallop when it comes to gaming. With three times as many cores as G 310M and twice the memory bandwidth, we expect at least double the performance out of the GT 415M. Wondering what that means? Well, 310M is already about three times faster than Intel's HD Graphics and typically more than twice as fast as AMD's HD 4200 IGP. In fact, it's only slightly slower than HD 5470, so if we get twice that level of performance with the bottom-of-the-barrel discrete GPU from NVIDIA all we can say is… it's about time! Of course, our Sandy Bridge preview indicates that Intel may roughly match G 310M performance with their next IGP, so Optimus or no users will want more from discrete GPUs.

Wrapping things up, we have the other NVIDIA features like 3D Vision (GT 425M or higher required for gaming, because of the 60FPS target to render two separate views), and the new 3D notebooks will also support 3DTV Play. And if you've wondered about the utility of 3D Vision on notebooks—after all, who wants to carry around the extra USB shutter transmitter?—the new line of 3D Vision enabled laptops will be integrating the emitter into the display bezel. 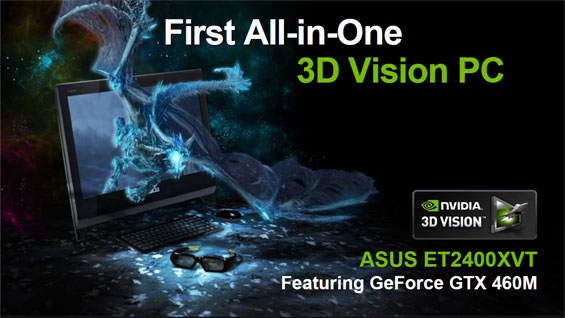 One last win for NVIDIA comes from ASUS, who will be building an all-in-one 3D Vision PC with the GTX 460M driving the graphics. Like the new 400M notebooks, the 3D emitter is integrated in the display bezel, providing for less wire clutter. We don't have any other details on the ASUS ET2400XVT other than availability is scheduled for some time in the next month or two; hopefully we can get one to test drive and let you know how it works in the near future.

All told, the 400M lineup is looking pretty good right about now. AMD got there first with top to bottom DX11 mobile parts, but performance wasn't substantially higher in many cases than their previous 4000 series. DX11 was a big selling point though, and judging by the number of HD 5000 laptop design wins consumers like the feature. Now NVIDIA can strike back with not just DX11, but very likely higher performance and features like CUDA, PhysX, and Optimus. If you've been holding off buying a new laptop, this fall may finally have the new designs to tempt you into upgrading. Unfortunately, that makes the last few pre-400M laptops we have in hand for review just a little less compelling, but hopefully those who don't need DX11 will be able to find some great deals on the current "outdated" crop as a consolation prize. Have I mentioned how much I like competition?