So, SurePress is finally gone; it turns out you don’t need a reassuring click to successfully interact with a touchscreen. In its place is a capacitive multitouch display that’s mostly old hat for Android (post 2.1) and iDevice users alike. It’s nice to see that RIM was able to finally admit it was wrong about SurePress, even if there was never an outright admission. The Torch is admission of guilt enough, I suppose.

The touchscreen interaction on the Torch is actually top notch and responsive. I’ll get into browsing in a bit, but I found that multitouch gestures like pinch to zoom and flicking work and are recognized just like they should be. Part of making touch work is keeping the UI speedy and completely responsive, so that gestures and interaction take place fast enough to be believable. Luckily the Torch touchscreen always tracks properly and feels responsive.

Of course, the downside to the Torch’s screen is relatively low dot pitch, at 188 ppi. Bear in mind, however, that until the iPhone 4 swung around with its 330 ppi screen, the 3GS’ 165 ppi screen was generally considered good enough by many.

I made the move from a 285 ppi Touch Pro to the iPhone 3GS, and it took weeks to get over how downgraded that screen felt. Similarly, the larger 4” devices are creeping close to looking grainy as well, with the EVO 4G and Droid X sporting 217 and 228 ppi screens, respectively. There’s a fair amount of personal taste involved for whether physical size or dot pitch is most important. 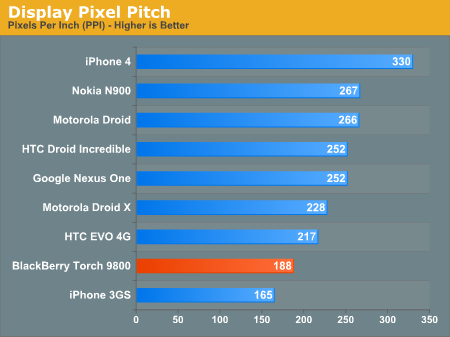 Higher dot pitch screens undeniably look more attractive in person, and admittedly the Torch is behind the curve in this regard, but the fidelity of the display is by no means disappointing enough that it should dissuade potential customers that are already BlackBerry owners. It's disappointing for sure that the Torch doesn't have something Retina Display level resolution sure, but it isn't a showstopper. That said, if you already do have a higher dot pitch screen, you’ll feel the same amount of distaste I did switching from a VGA Touch Pro to a QVGA iPhone 3GS over a year ago. 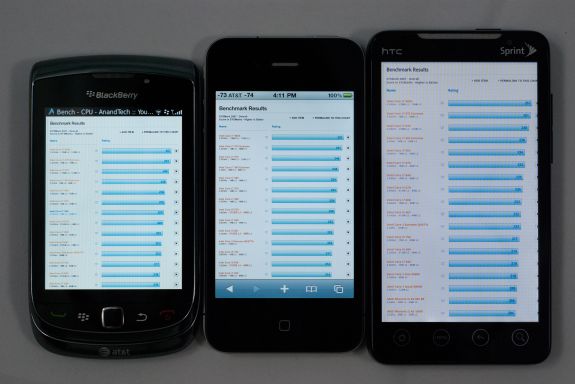 You can really see the difference when comparing small text on webpages, and it’s especially dramatic when compared to the iPhone 4. 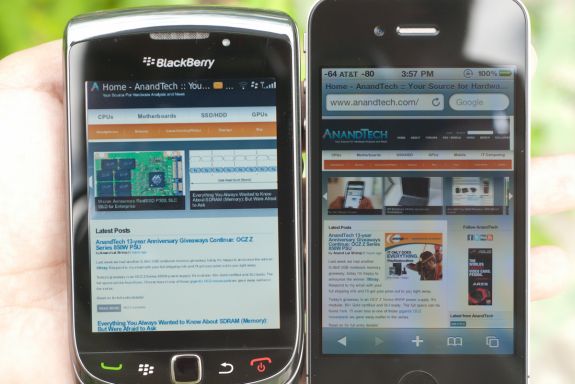 The Torch’s screen is one of the most readable outside that I’ve encountered in a while, with text and webpages being easy to make out even in intense daylight. Alongside the iPhone 4, the difference is pretty immediate, especially in how good white appears on the Torch compared to the iPhone 4.

The BlackBerry Torch 9800 is one of the most readable phones outside as I noted, and the reason is no doubt partially due to the exceptionally bright display - it's like a torch. Ha, ha, erm... Seriously it's the brightest I've measured: 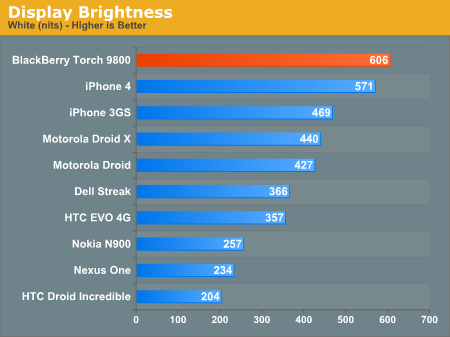 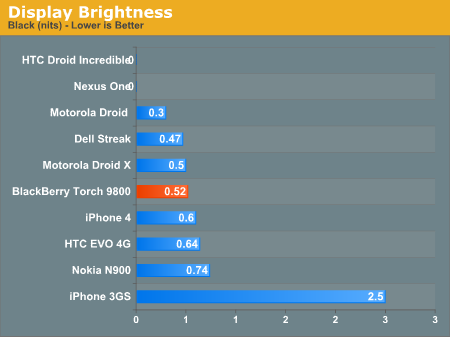 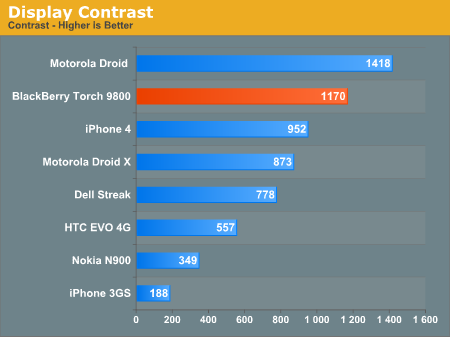 Contrast is quite good on the Torch but can't quite best the first Motorola Droid's IPS display, unsurprisingly. Of course, the HTC Incredible and Nexus One AMOLED displays lead here technically since their black brightness levels are literally 0 nits.

Viewing angles are good but not perfect on the Torch, especially compared side by side with the iPhone 4, though I never was wanting for better viewing angles during regular use. Full comparison gallery is below in full resolution.