If Intel's roadmap and pricing hold true, then the Core i5 2400 should give you an average of 23% better performance than the Core i5 760 at a potentially lower point. If we compare shipping configurations, the Core i5 2400 should actually perform like a Core i7 880 despite not having Hyper Threading enabled. Clock for clock however, Sandy Bridge seems to offer a 10% increase in performance. Keep in mind that this analysis was done without a functional turbo mode, so the shipping Sandy Bridge CPUs should be even quicker. I'd estimate you can add another 3 - 7% to these numbers for the final chips. That's not bad at all for what amounts to a free upgrade compared to what you'd buy today. Power consumption will also see an improvement. Not only will Sandy Bridge be noticeably quicker than Lynnfield, it'll draw less power.

While Nehalem was an easy sell if you had highly threaded workloads, Sandy Bridge looks to improve performance across the board regardless of thread count. It's a key differentiator that should make Sandy Bridge an attractive upgrade to more people. 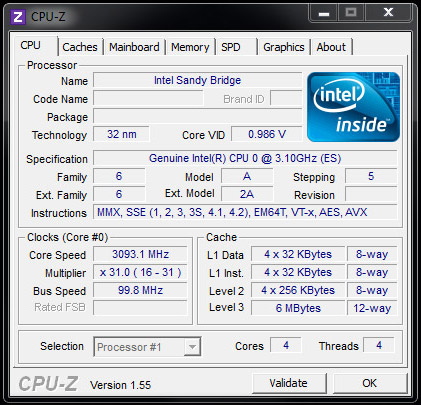 The overclocking prevention Intel is putting into Sandy Bridge sounds pretty bad at first. However if the roadmap and pricing stay their course, it looks like overclockers looking to spend as much as they did on Core i5 750/760s won't be limited at all thanks to the K SKUs in the mix. The real question is what happens at the low end. While I don't get the impression that the Core i3 2000 series will be completely locked, it's unclear how much rope Intel will give us.

Sandy Bridge's integrated graphics is good. It's fast enough to put all previous attempts at integrated graphics to shame and compete with entry level discrete GPUs. The fact that you can get Radeon HD 5450 performance for free with a Core i5 2400 is just awesome. As I mentioned before, you won't want to throw away your GTX 460, but if you were planning on spending $50 on a GPU - you may not need to with Sandy Bridge.

Assuming mobile Sandy Bridge performs at least as well as the desktop parts, we may finally be at the point where what you get with a mainstream notebook is good enough to actually play some games. I'm really curious to see how well the higher spec integrated graphics parts do once Sandy Bridge makes it a little closer to final (Update: it looks like we may have had a 12 EU part from the start). I should add that despite the GPU performance improvement - don't believe this is enough. I would like to see another doubling in integrated GPU performance before I'm really happy, but now it's very clear that Intel is taking integrated graphics seriously.

Architecturally, I'm very curious to see what Intel has done with Sandy Bridge. Given the improvements in FP performance and what I've heard about general purpose performance, I'm thinking there's a lot more than we've seen here today. Then there are the features that we were unable to test: Sandy Bridge's improved turbo and its alleged on-die video transcode engine. If the latter is as capable as I've heard, you may be able to have better transcoding performance on your notebook than you do on your desktop today. Update: Check out our Sandy Bridge Architecture article for full details on the CPU's architecture.

With Sandy Bridge next year you'll get higher clock speeds, more performance per clock and reasonable integrated graphics at presumably the same prices we're paying today. What's even more exciting is the fact that what we're looking at is just mainstream performance. The high end Sandy Bridge parts don't arrive until the second half of 2011 which add more cores and more memory bandwidth.