The WD Livewire comes in a box with the bare essentials. Unlike the WDTV Live, there aren't as many cables or batteries to deal with. Opening the package reveals a pictorial setup guide, the warranty document and the setup CD. Beneath this, we have a pair of powerline kits. Each kit consists of a 4 port routing unit, along with a short Ethernet cable and an AC power outlet connector. The routing unit is made of black plastic with a WD logo on the top side. It blends well in any sort of setup, and is quite similar in structure to the WDTV Live, except that it is not as thick. This can be seen quite clearly in the photograph below.

The other routing unit can be connected to any power outlet in the residence, making available 4 Ethernet ports at that power outlet for usage. It is not hard to imagine requiring four ports at the second power outlet, particularly if it is the entertainment center. A large number of TVs, Blu-Ray players (and the WDTV Live, as well) and other entertainment center components come with an Ethernet port for connecting to the Internet as well as the home network. The package goes to great lengths (to the extent of placing stickers to cover up the power outlet plug point on the routing unit) to make sure that users don't connect it to a power strip or surge protector. This is an advice provided with good intentions, as we personally saw some of the low cost surge protectors halving the available bandwidth. This will be covered in detail in the benchmarking section.

It is not essential to run the installation CD, as we were able to get up and running without it. However, for people who want to secure their powerline network, the installation CD comes with a Livewire utility. As can be seen from the screenshots below, the utility allows firmware updating, and also indicates the powerline kits available on the network (other than the primary one connected to the router). We also get an indication of the bandwidth available on that particular device. 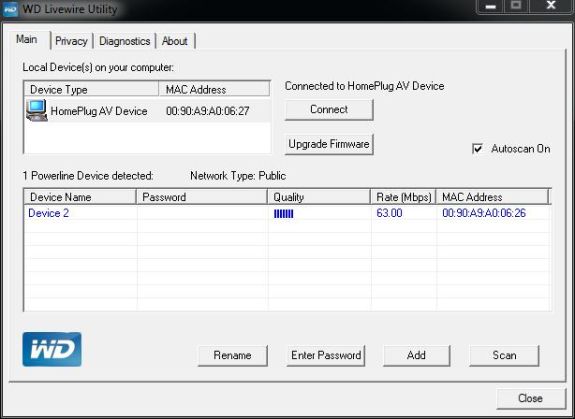 The Privacy tab allows the user to setup a name for the Powerline network, and gives an option to only allow devices on which the password has been entered. The entering of the password referred to in the screenshot actually implies the pressing of the 'Sync' button on all the powerline kits which are intended to become part of the private network. This has to be done for less than 3 seconds on each, but not more than 2 minutes apart. 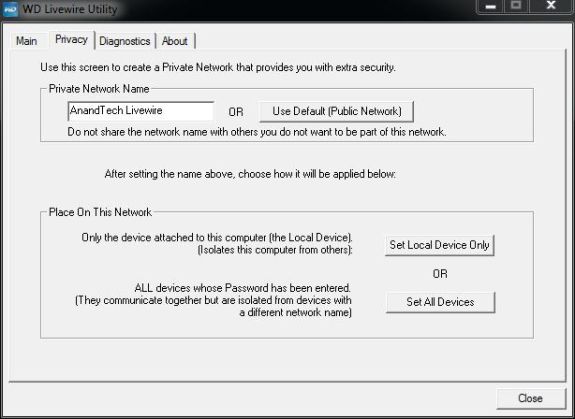 WD also supplies a 26 page PDF manual with detailed setup and troubleshooting details. All said, the packaging of the kits is professional, and setup is quite straightforward for even the novice users. Most people should get up and running in no time, provided they do not need to mess with private networks of any kind.