Asus U33Jc: Much Ado About Bamboo 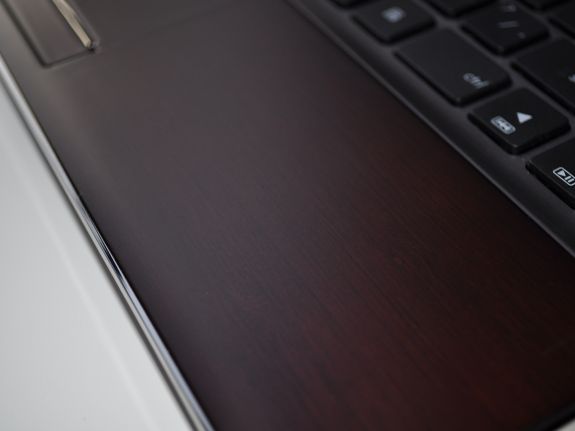 So let’s get into this bamboo stuff. ASUS is pointing to two main benefits with the usage of bamboo: it’s more environmentally friendly than the traditional ABS plastic while maintaining structural rigidity, and it offers a distinctive look and feel. Let’s start with the first claim.

When we start to dig a little bit deeper into the process ASUS uses to make the bamboo notebooks, we run into some sticking points, starting with the fact that there isn’t actually that much wood. The bamboo “panels” themselves are extremely thin, ranging between 0.18 and 0.45 millimeters in thickness. That’s 0.007-0.018 inches, which is closer to a wood veneer than any kind of wood panel. Veneers tend to be less than 3mm or 1/8”, so the bamboo used on the U-series Bamboo Collection notebooks is definitely in that category. Behind the wood is a geotextile backing, with an adhesive in between to bond the two. The backing is mounted in an injection-molded ABS frame.

ASUS claims that the bamboo process can reduce plastic usage by 20%, and on the U33 chassis, 15% of plastic content is saved. This is all fine and well, but with all the chemicals involved in the protective polyurethane overcoat along with the treating and staining of the wood trim, I can’t vouch for the overall environmental friendliness of the process. With that said, the 15% reduction in plastic content is pretty impressive given how little wood there actually is.

Another interesting claim by ASUS is that the bamboo used has similar tensile strength properties to steel. Assuming that they’re talking about elastic deformation, this makes sense, but it completely ignores two things. One is that as a wood, bamboo doesn’t have much in the way of plastic deformation—wood is a brittle material, so once you hit the point of ultimate tensile strength, it just breaks. The other is that, at less than 20 thousandths of an inch, you could use a material with the tensile properties of water and still not have any kind of effect on the structural qualities of the notebook. Seriously, it doesn’t matter that bamboo is as strong as steel if you’re using panels as thick as three sheets of paper.

Chalk that one up to the marketing team, but at least there’s a nice reduction in the use of plastic. But other than that, this is basically just a regular notebook with a wooden veneer to make it look and feel nice.

That’s where the bamboo really makes its presence felt, quite literally. The wood is just so organic and natural feeling compared to the cold solidity of an aluminum chassis or the generic feel of a plastic chassis. It’s like getting into a Lexus—everything is so warm and soft and inviting, and very high quality. Compared to a regular laptop, that’s the difference; it just exudes a more luxurious vibe. This is a stark contrast to the Adamo, which was all about the style and industrial design. Every surface was metal or glass; there wasn’t a line out of place anywhere on the notebook. The U33Jc isn’t so much about cutting edge ID so much as it is about giving the user a more personal and textured experience. For example, no two U33’s will be alike due to the fact that different pieces of bamboo will have different textures and will mature as the laptop ages. Nuances like that make the U33Jc feel like a special type of mobile computer.