HTPC enthusiasts are rightly concerned about the noise factor, heat and power consumption, ease of usage and many other criteria. We will tackle each of these concerns one by one in this section.

ASRock claims that the Core 100 HT-BD produces less than 25dB of noise. Under lab testing conditions, such performance is indeed possible. We decided to get hold of one of the sound meters used in setting up home theater speakers to verify whether the claims were true. Being a hobbyist sound meter, it wasn't very sensitive. The measurable sound range was only 50 - 130 dB, and there was a concern that the Core 100 would be too silent for the sound meter to pick up. As it turned out, while running Prime95 at full throttle (100% CPU utilization), the fans kicked in at full speed. The sound meter registered between 53 and 55 dB very close to the unit. [ See UPDATE below for a more practical measurement ] 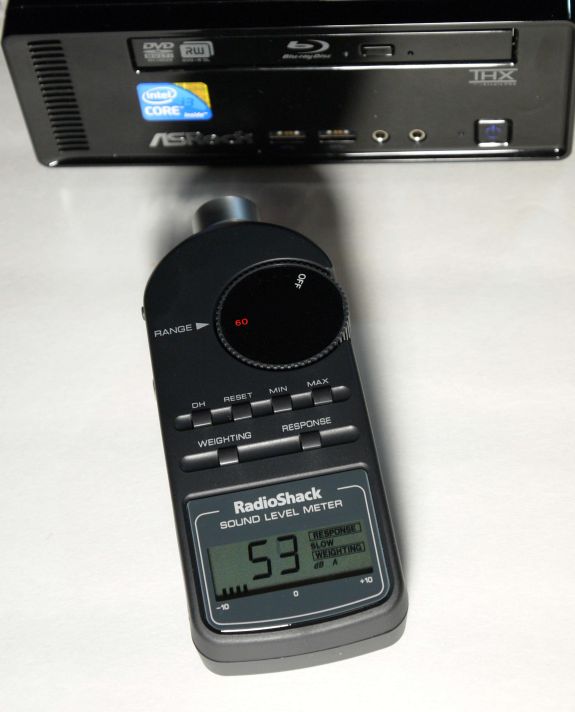 The fan noise is quite audible if one sits very close to the unit. From 8 ft away, even with the unit in the open, we could barely hear it. Noise, however, is a very subjective issue. We hope the quoted number will help give readers an idea of how noisy the system gets when fully loaded. If the unit is going to be installed inside a cabinet of some sort, the noise factor becomes a non-issue.

UPDATE: One of the reasons we kept our sound detector very close to the unit was because it refused to register any measurement at the usual practical distances. While waiting to get hold of a more sensitive sound meter, we asked ASRock for lab results of sound measurement at full throttle. They were happy to oblige us with the following photographs and video from their anechoic chamber. It appears that the sound level is less than 35dB at a distance of 2 ft. even with all fans in action.

Sound Level Detector 2 ft away from the Core 100

In order to get an idea of the power consumption numbers, the Prime95 benchmark was let run overnight to keep the system completely loaded for an extended duration. All the four 'cores' of the CPU were pegged at 100% throughout, and we found an average power consumption of less than 48 W. At idle, the system consumed around 18 W.

These type of power consumption numbers have been enabled by ASRock's choice of going in for an Arrandale instead of a Clarkdale platform. This has resulted in a smaller form factor case design for the mini-ITX motherboard. Since there is not much heat to be dissipated, the cooling system is also appropriately small and silent.

HTPC enthusiasts are concerned about how easy it is for their system to come out of standby. Existence of HDMI handshake issues upon return from standby is also a deal breaker for many. Fortunately, the Core 100 HT-BD has no issues in these two aspects. As long as the AC power adapter is connected to the system, the bundled MCE remote can be used to boot the system (even if the PC had been shut down previously). In order to shorten the boot times, ASRock supplies an Instant Boot utility. Using this, whenver the Core 100 HT-BD is shut down, it boots up once again and shuts down before the power can be safely removed. Upon power up, the boot up is instantaneous. If the user wants to put the PC in sleep mode, ASRock also supplies a Goodnight LED feature in the BIOS, which turns off the bright blue blinking LED in front. The MCE remote can also be used to bring the PC out of sleep mode.

Within Windows, the MCE remote can be made to work with a variety of applications such as XBMC, MediaPortal, MPC-HC and of course, Windows 7 Media Center. Blu Ray players such as PowerDVD and ArcSoft TMT can also be controlled with the help of the MCE remote. For the ideal I/O scenario, one probably needs to purchase a wireless keyboard / mouse combo.

It was seen in an earlier section that the Core 100 HT-BD happened to score quite well in the Anandtech Media Streamer Test Suite. The unit could playback all files using one program or the other, and people expect nothing else from a HTPC. Unfortunately, there is no single unified interface (from XBMC or MediaPortal or any other similar program) which could successfully play back all the files from within. There is definitely an ease of use issue existing here. However, this is not ASRock's fault, and will probably continue to exist on all Clarkdale / Arrandale platforms. Hopefully, projects such as XBMC's DSPlayer mature rapidly to alleviate this problem.