Kicking off our look at our vendor cards is the EVGA GeForce GTX 460 768MB SuperClocked. EVGA sent us two of their cards for SLI testing, which also affords us the opportunity to look at the overclocking capabilities of more than 1 of their cards today.

In fact EVGA keeps things rather simple: there are three things that separate the SuperClocked from any other reference card: the factory overclock, the support, and the included utilities.

Starting with the overclock, the SuperClocked is the first-tier card in EVGA’s factory overclocked lineup, behind the Super-SuperClocked, and the For The Win edition. EVGA ships the SuperClocked at 763MHz core, 950MHz (3.8GHz data rate) memory, giving the card a 13% core overclock and a 5.5% memory overclock. The fact that EVGA is shipping its “mere” SuperClocked card at 763MHz should tell you a lot about just how overclockable the GF104 GPU at the heart of the GTX 460 is – they’ve left room for up to 2 additional speed grades! As we’ll see in our overclocking testing the GTX 460 is quite the overclocker, and the already overclocked EVGA cards are no exception. 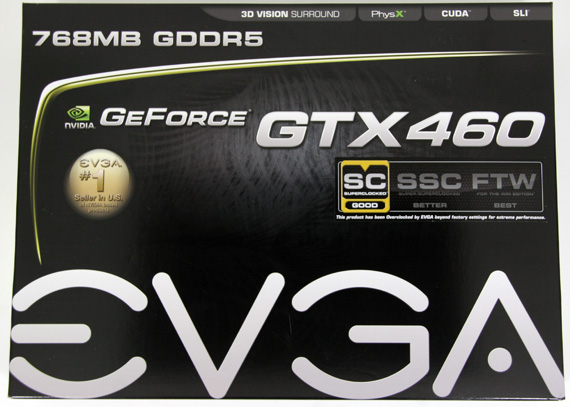 As for the support, EVGA is offering two versions of the SuperClocked. The TR version comes with a 2 year warranty, while the AR version which we received comes with a lifetime limited warranty. The difference comes down to $10, with the TR currently retailing for $210 and the AR retailing for $220. 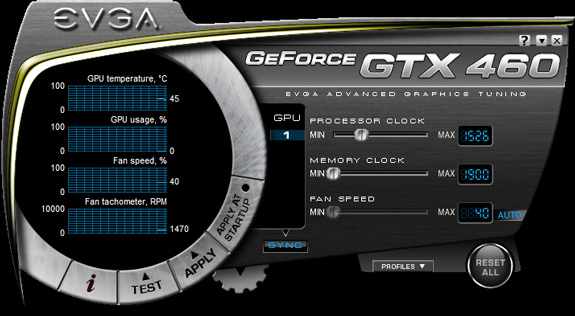 For the version included with the GTX 460, EVGA is defaulting to a new skin with GeForce GTX 460 branding. Unfortunately this is one of the gaudier skins the utility ships with – if you’re more a fan of the KISS principle, we’d strongly suggest using one of a number of other skins included with the utility to give the utility a more orthogonal layout. 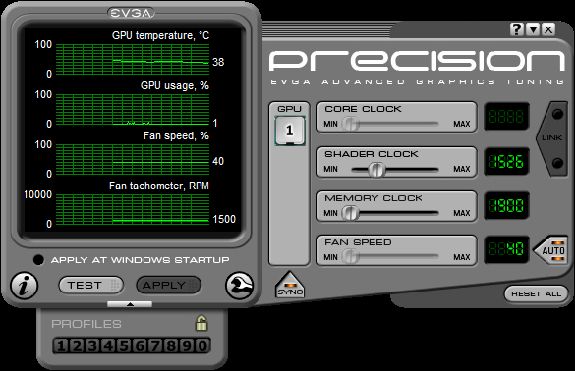 With a change of skins, EVGA Precision currently sets the gold standard for an overclocking utility along with MSI’s RivaTuner-derived Afterburner software. Precision is easy to use, light on resources, and in our experience we have never encountered any notable bugs with the utility. It has the features most users should need without going overboard and getting bloated with useless features. At this moment it can’t be beat.

EVGA’s second overclocking utility is the EVGA Overclock Scanner, which we have had the chance to watch evolve throughout the year. In a nutshell, the OC Scanner is a load-generating utility (ala Furmark) which rather than generating a moving image generates a static image. By generating a static image it’s possible for the software to identify any rendering errors in the image that would be indicative of a bad overclock. Or in other words, if you’ve overclocked your card too far, this utility will let you know. Unlike EVGA Precision however, this utility is only for EVGA card owners, specifically owners of GTX 400 series cards. 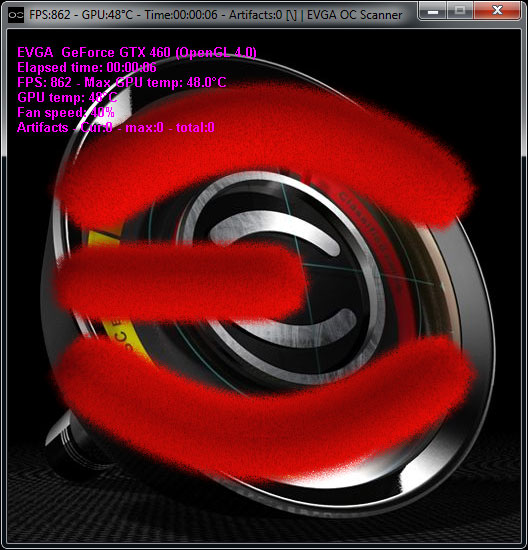 In our experience with the utility it’s fairly – but not perfectly – accurate. Of our 2 sample cards it properly found 1 unstable overclock that was generating graphical errors without a lockup, while it let us go 10MHz over on the other card which would lockup under Furmark. Overall the utility doesn’t seem to be quite as strenuous as Furmark, so we’d suggest knocking around 10MHz off of whatever EVGA Precision approves to play it safe.

At this point the EVGA Overclock Scanner can only tell if an overclock is stable, but it can’t find an overclock on its own. Currently there’s minimal integration with EVGA Precision (you can launch OC Scanner from within Precision) but we would like to see it evolve in to a self-overclocking utility in the future in order to make overclocking even easier.

Rounding out the package is the obligatory quick start manual, a collection of molex to PCIe power adaptors, a driver/utility CD, a bumper sticker, and thus far the only GTX 400 series card we’ve seen that comes with a mini-HDMI to HDMI adapter.