As we’ve discussed in previous articles, with the Fermi family GPUs no longer are binned for operation at a single voltage, rather they’re assigned whatever level of voltage is required for them to operate at the desired clockspeeds. As a result any two otherwise identical cards can have a different core voltage, which muddies the situation some. All of our GTX 460 cards have an idle voltage of 0.875v, while their load voltage is listed below.

Our cards end up ranging from 0.975v to 1.025v, a variance of 0.05v. The 1GB cards with additional functional units on average require more voltage to operate, with the lowest of our samples requiring 1.0v. Otherwise 3 of our 4 768MB cards require 0.975v.

On a side note, since we’re using non-matching 1GB GTX 460s here for SLI testing, we’ve added an asterisk for all the power & temperature results. Our results should be very close to what a proper set of matching reference cards would get, but we can’t guarantee that. 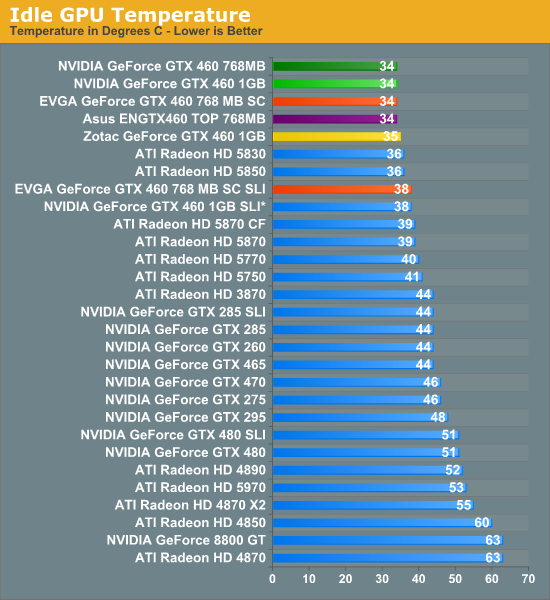 We’ll start with idle temperatures.  With an unofficial idle TDP in the 20W range, the GTX 460 series is fairly comparable to the Radeon 5850, but with a more breezy cooler. As a consequence we can see it edge out the rest of our cards here, with all of the open GTX 460s coming in at 34C for idle. Meanwhile the blower-based Zotac card comes in a hair warmer at 35C. Even with a blower, these end up being the coolest mid-range or better cards we have ever tested, besting even the Radeon 5850. 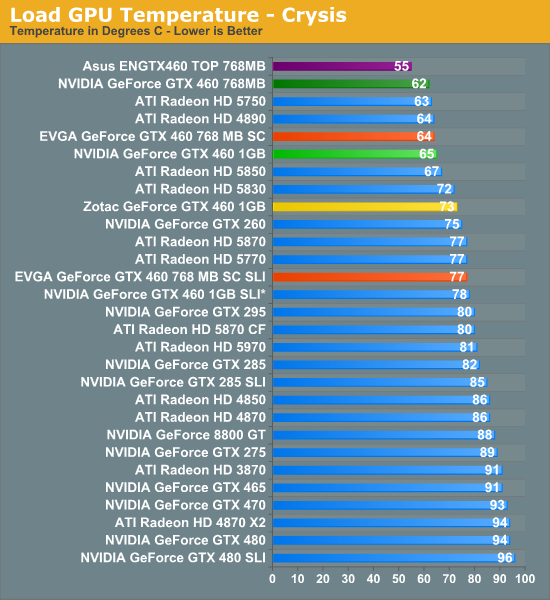 Meanwhile at load the good news continues for the GTX 460 series. The GTX 480 may have been a toasty GPU, but that’s not the case for the GF104 GPU at the heart of the GTX 460 series. Our reference cards do only slightly worse than 60C in Crysis, while Asus’s non-reference card gets that even lower thanks to a more proactive fan. Zotac’s blower doesn’t fare so well here though, coming in at a still respectable but nevertheless higher 73C.

Compared to AMD’s cards the GTX 460 does very well here. The Radeon 5850 is still the sweet spot for a balance of performance and heat, but the GTX 460 manages to do better in terms of heat at a price of lower gaming performance. Meanwhile our Radeon 5830 isn’t even a contender here; as a salvaged Cypress part, it just can’t compete with a part designed for cooler performance from the start. Among all the cards we’ve tested equal to or faster than the 8800GT however, the GTX 460 sets the new bar for how cool a high performance card can operate. 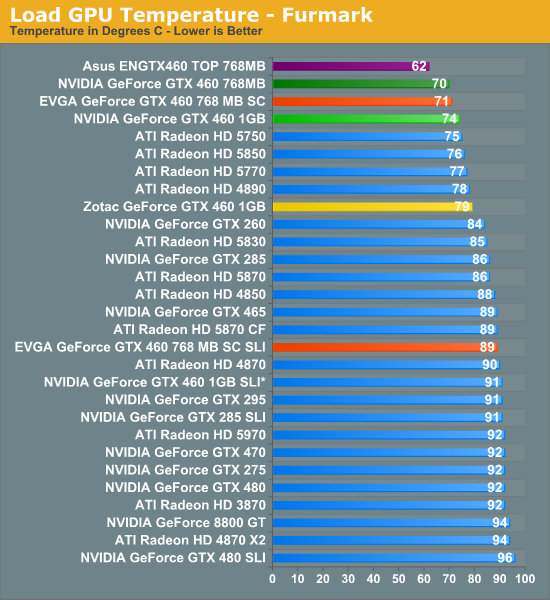 The results with Furmark match those of Crysis, it’s just a bit hotter. The interesting story here is going to be SLI temperatures: our 768MB and 1GB SLI cards hit 89C and 91C respectively. This isn’t a problem for NVIDIA’s GPUs (we see single GTX 480 cards do worse) but it’s a massive jump from a single card. For these reasons we would strongly suggest keeping these cards further spaced apart if you have a motherboard that supports it. The GTX 460 reference cooler just isn’t up to the task of pulling in fresh air if it’s next to another card. 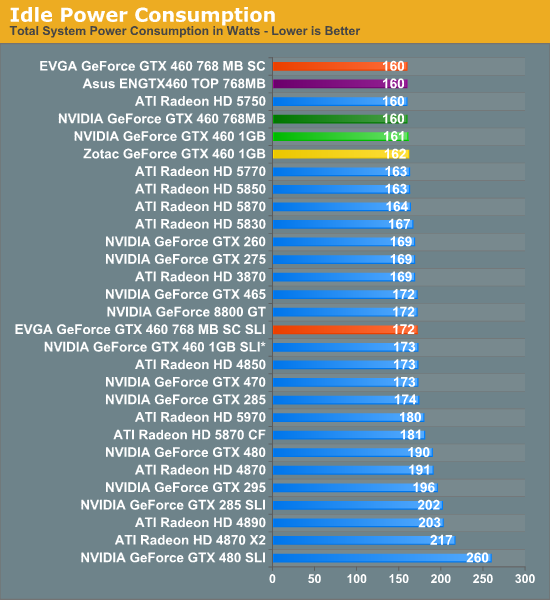 Our idle power numbers continue to lower the bar for GPUs of this performance class, although at this point we’re hitting the efficiency limits of our PSU at low wattages. Our 768MB GTX 460s end up sharing the 160W mark with the Radeon HD 5750, while for 1W more you have the 1GB cards. 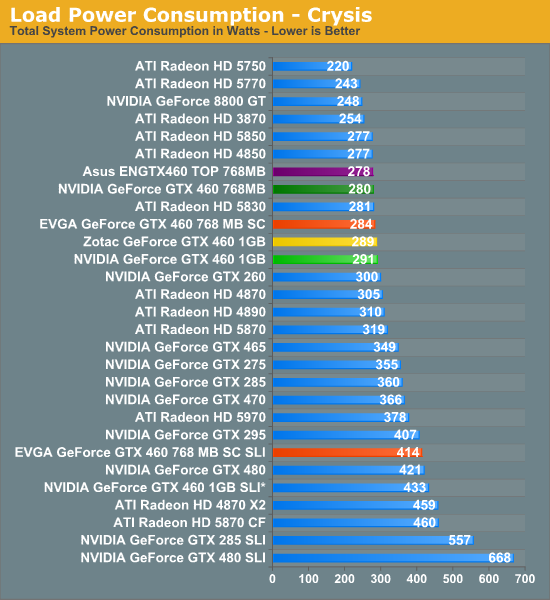 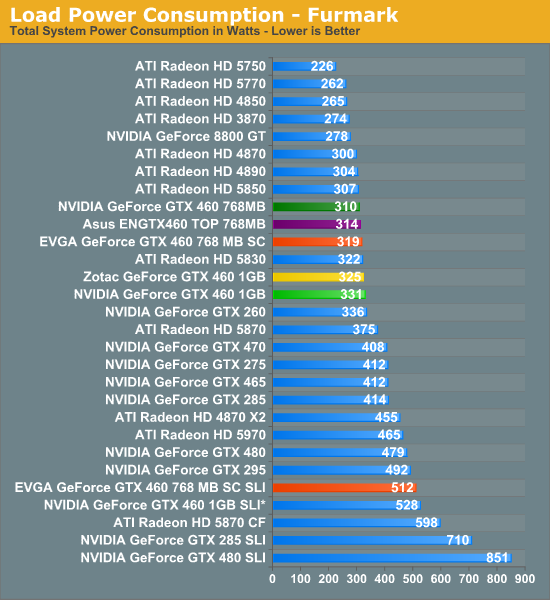 When looking at load power consumption, it’s always interesting to compare the power drawn with the temperatures. While the GTX 460 did very well here with regard to temperature, its power consumption reflects the fact that its GPU is still Cypress-sized. Under Crysis at a 280W load the 768MB part is comparable to the Radeon 5830 and the 1GB part adds around 10W to that. Meanwhile the Radeon 5850 manages to pull just a bit less power here, while the GTX 465 draws some 60W-70W more than the GTX 460. Gmae performance with those two cards may be close – power consumption is not.

As for Furmark the power consumption goes up but the ordering does not. Our 1GB cards now draw 20W more than 768MB cards, but the Radeon 5830 is still in the middle of the pack while the Radeon 5850 comes out ahead. The GTX 465 is now 80W-100W hotter than the GTX 460. Overall with a “proper” Radeon 5000 series card NVIDIA still can’t match AMD on a performance per watt basis, but they can come very close. 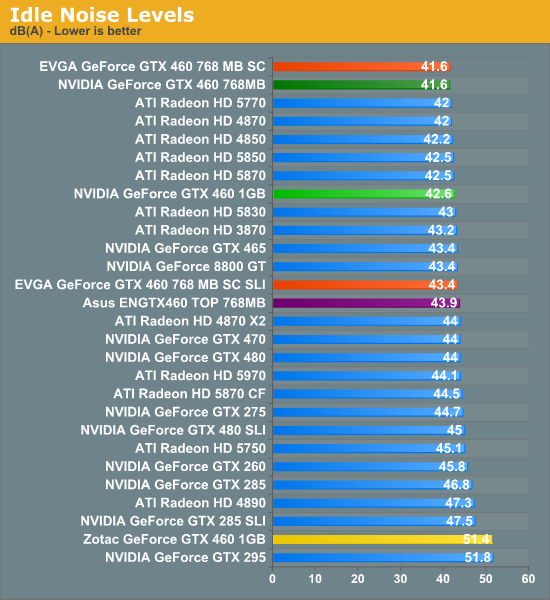 Finally we have our look at noise. With cool running cards we often have to look at fan noise to ensure that they aren’t accomplishing that trick by sounding like a jet engine, and in the case of the GTX 460 that’s clearly not the case. Besides being some of the coolest cards we’ve tested at this performance level the GTX 460 cards are also just as quiet as the rest of the best of the cards we’ve tested, hugging the 42dB sound floor in our testing environment. The 1GB reference card is marginally louder, while the partner customized cards are only slightly louder yet. The only card to really flop here is the Zotac GTX 460, which is at entirely the wrong end of our charts. Blowers can be quiet, but the Zotac’s is not – it’s simply a loud card. Unfortunately this kind of an idle noise level is going to put the card out of the running for a lot of buyers. 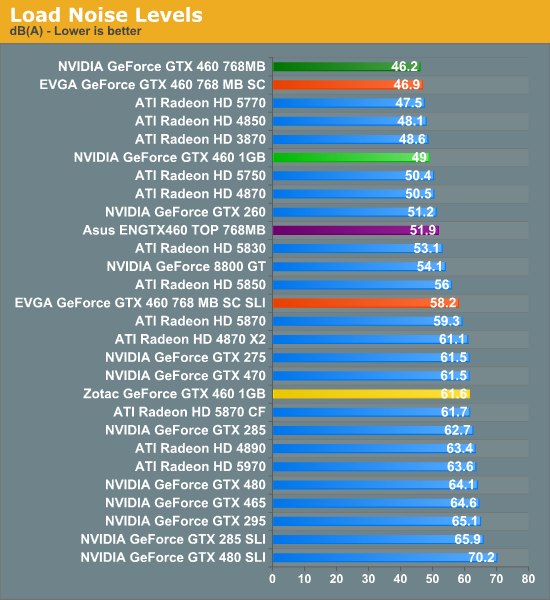 Load noise is more or less like our idle noise results. The 768MB GTX 460 registers the lowest result we’ve ever seen for a card of this performance level, coming in at 46.2dB and the EVGA card right behind it. The 1GB card does end up being louder (likely to compensate for cooling 2 more GDDR5 chips) but it’s still in good company.  Asus’s card cracks 50dB, as it’s tuned for cooling over noise, explaining our earlier temperature results. Unfortunately the Zotac card is once again the odd man out at 61dB, roughly as loud as our GTX 470 is. It’s neither cooler than our reference cards nor quieter, which doesn’t bode well for this stock-clocked card.