In my N900/Motorola Droid piece, I alluded to an interesting note I made about the iPhone 3GS's speaker volume. For a long while, people have complained that the iPhone's speakerphone volume was too quiet, complaining that even at the maximum volume it was nowhere near loud enough. The same applied to noise level over the handset through the earphone speaker.

I've noticed a similar issue, but picked out another detail while testing the AT&T MicroCell - calls on 2G are louder than calls on 3G. After I got my soundmeter, I set out about measuring, and found that my suspicions were confirmed. Calls on 2G GSM are indeed significantly louder than calls on 3G UMTS on the iPhone, and curiously not so on the Nexus One. The reason? Dynamic range compression.

If you're familiar with the FM loudness war, than you'll instantly understand what's at play with 2G versus 3G call loudness. Calls placed over GSM have a smaller dynamic range, while 3G calls over UMTS have greater dynamic range (and fidelity). The dynamic range of GSM is roughly equivalent to CDMA 1xRTT (which is what all calls on Sprint and Verizon are placed over - not over 3G Ev-Do), though that's a whole other can of worms to discuss. Regardless, when users unfamiliar with the inherent difference in fidelity hear a 3G call after getting accustomed to 2G loudness from 1xRTT or GSM, it sounds notably quiet on the iPhone.

This is a problem that's existed since the iPhone 3G, and has gone unchecked in the 3GS, and 4. For whatever reason, Apple isn't increasing the gain on 3G to match the same loudness, possibly to preserve fidelity, and the result is that the speakerphone and earpiece are never as loud as they really could be compared to a 2G call. As I mentioned before, Android on the Nexus One appears to use an automatic gain algorithm to normalize loudness. If you place a 3G call and listen carefully, you can actually hear the gain ramp up to meet the same loudness as the 2G GSM call. 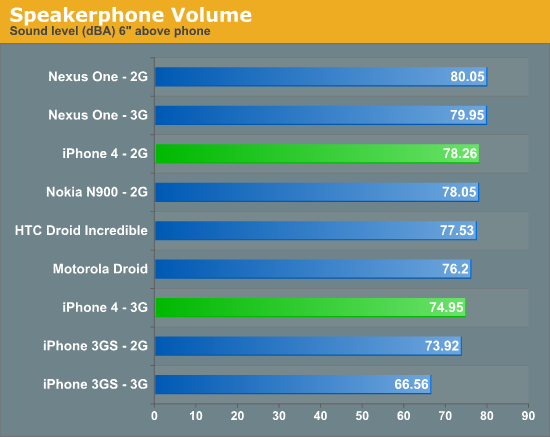 The difference between these phones might not look like much, but keep in mind the logarithmic nature of dB: -3 dB is half the loudness.

On the iPhone 3GS, the difference is 7.36 dBA, while the iPhone 4 somewhat lowers it down to a still-audibly-different 3.31 dBA. The Nexus One shows no difference in loudness between 2G and 3G, correcting both to a (likely purposefully exact) 80 dBA. The iPhone 4 is indeed louder than the 3GS, by 4 dBA. It's a difference, but not an overwhelming one. I'd say the iPhone 4's speakerphone is still loud enough, though calls over 3G are still a bit too quiet. Until Apple increases the gain on 3G calls, iPhone 4 customers who are hard of hearing should invest in a bluetooth headset.