I really wanted to love the EVO 4G, but as I just described to a colleague of mine the experience is very bipolar. It ranges from wonderful when watching movies or reading a webpage, to frustrating when it comes to battery life or performance.

Where the EVO shines is in its screen. I can’t help but feel that all of those pixels are put to waste on smaller displays. The 4.3” screen is a great balance of pixel density and physical size. Throw in great contrast ratio and you’ve got the makings of a wonderful display. It’s still a bit oversaturated for my tastes but compared to most LCDs on the market you’ll fall in love.

It’s not pushing the limits of resolution nor is it great in direct sunlight, but the screen is awesome for watching videos. In fact the screen size makes the EVO 4G the ideal video playback smartphone. Including the kickstand was a wonderful design decision on HTC’s part, it really makes this phone perfect for movies. If you want a smaller alternative to carrying a large tablet for video playback I’d say the EVO 4G could work. 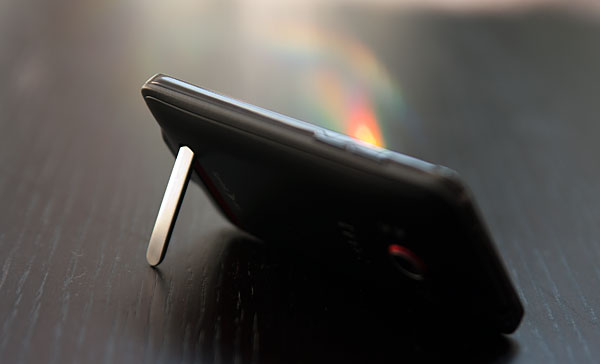 The large screen size also makes the EVO 4G great for reading websites. I’d argue that it’s even better than the iPhone 4’s screen for browsing the “regular” web simply because of its size. It’s also better at interacting with websites. Posting comments or using web administration tools is far easier on the EVO than on any of the smaller phones. Typing on the EVO is also better than on any other Android phone I’ve used thanks again to its screen.

The OS is extremely flexible and HTC’s Sense adds enough functionality to genuinely improve it. The EVO feels solid and is well designed. I appreciate that HTC ditched the trackball/optical sensor from previous designs and kept it simple this time around.

Both Sprint and HTC were forward looking enough to pair such a powerful phone with a (potentially) very quick network. The 4G support is nice on paper however in practice it didn’t work out so well for me in Raleigh, NC.

Sprint’s 4G network is nice where there’s coverage, but at least around Raleigh most of the time you’re better off sticking to 3G. The performance on WiMAX simply ranges from horrible to great while Sprint’s 3G coverage is far more consistent. However Sprint’s 3G is far from speedy, usually delivering well below 1Mbps on the EVO in my testing. If you do have spectacular 4G coverage and speeds where you live, this may end up being more of a positive than it was for me.

For travelers, the EVO 4G simply doesn’t have long enough battery life to be used as a truly mobile device. In my opinion even 5 hours of battery life isn’t enough and the EVO comes in well below that for anything you’d do with the phone. If you travel for work and have to be away from a power outlet for the majority of the day this is going to be a problem. If you’re in school or work from home and can top off the battery every couple of hours then the problem is less severe. Luckily the EVO 4G does have a removable battery, so if you are dedicated you can make this thing work. Just carry an extra battery or two, keep them charged, and you'll be fine. If you don't like that idea, then look elsewhere - the EVO 4G won't cut it.

The EVO 4G is also slower (from an OS/UI standpoint) in day to day use compared to the Incredible or even the Nexus One. I’m not sure what’s going on here but HTC went from a highly optimized software stack with the Incredible, to something that’s arguably worse than the Nexus One. Scrolling and animations are both laggy and choppy. Then there’s the occasional inexplicable slowdown - something I haven’t encountered on either the Nexus One or the HTC Incredible. There’s a lot of optimization work that has to be done. 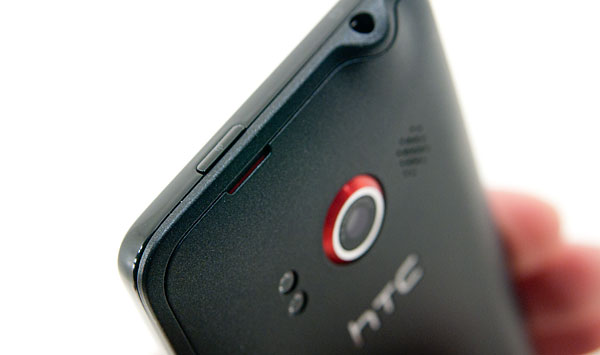 I believe we’re seeing the beginnings of real divergence here. While there’s an argument that can be made for smaller devices, it’s just as valid to push for the creation of larger screen devices like the EVO 4G. The interest in sub-10” web tablets alone indicates that users want the features of a smartphone but paired with a more user friendly screen size. The EVO 4G attempts to go after that crowd and does reasonably well for a first attempt.

While I believe the best overall Android phone is still the HTC Incredible, if you're willing to put up with the EVO 4G's issues then it can be a good alternative. It really boils down to what you want to do with your smartphone. If you’re going to be watching movies and need to do a lot of productive/interactive web browsing, then the EVO is at a definite advantage. You can overlook the battery problems if you carry around a spare and you can get used to the performance if the screen size matters enough to you. And if you happen to be in an area with good 4G coverage, that sweetens the pot considerably. It's like driving an SUV. Sometimes the added space helps, but it's up to you to determine whether or not the gas mileage and sheer size are worth it to you.

Personally, I'm still searching. I like the EVO's screen, the Incredible's smoothness and the Nexus One's build quality. While I'd be willing to carry something the size of the EVO, I'd need it to be perfect in order to make that tradeoff.