Going from virtually any phone to the EVO 4G will be a pleasant experience. Die hard iPhone users will notice one thing however: choppy animations.

There’s lag or choppy animations when scrolling down a page, swiping between screens and generally interacting with the phone. What’s even more frustrating is if you leave a lot of apps resident in memory there are times when the UI will stop being responsive. If you have haptics turned off there’s no way to tell whether or not a button tap was recognized, often resulting in a double or triple tap which then results in an unintended phone call or similarly frustrating action. It definitely hampers the experience.

The best way to describe it is by comparing it to an old PC that just starts swapping to disk because it runs out of memory. It’s worse than anything I’ve seen on any other Android phone I’ve used (Nexus One, Incredible).

Remember how happy I was that HTC largely fixed the choppy scrolling of the Nexus One with the Incredible? It’s broken again with the EVO 4G. In fact, scrolling appears to be even worse on the EVO 4G than on the Nexus One for some reason. Given that this is mostly the same underlying hardware I can’t help but think it’s a driver or software optimization problem.

Scrolling isn't GPU accelerated, so a quick flick down a page will drive CPU utilization up to 40 - 50%. The only way around this is to either optimize the crap out of the code or move to dual core CPUs so there's another core ready to handle anything else you throw at it. Combined with a lightly CPU intensive app I found that scrolling can sometimes even send CPU utilization up above 70%!

To measure web browsing performance I downloaded a bunch of different web pages and saved as much of them as possible locally on a server. I used WiFi (802.11g) on all of the devices to connect to my local server and timed average load time. I repeated the test at least 3 times and threw out any unusually high or low numbers. Performance on the Android devices was from a clean restart with no unnecessary programs running in memory. 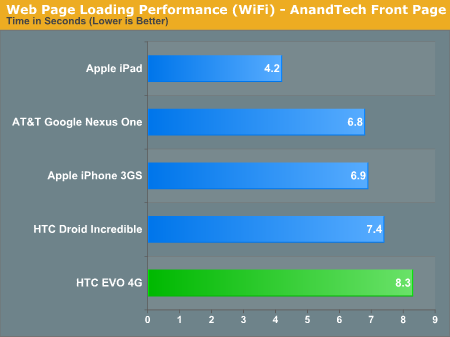 The EVO 4G is actually slower than the Incredible, which isn't totally surprising given that the device actually feels slower. 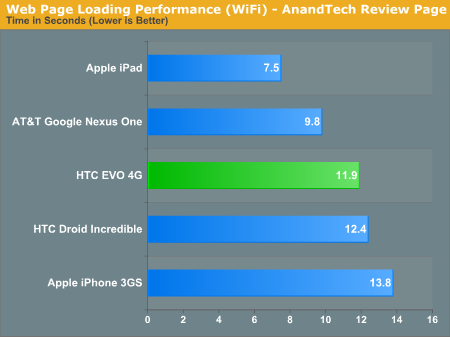 Here the EVO actually inches ahead over the Incredible, but none of the HTC devices are still as fast as the Nexus One. 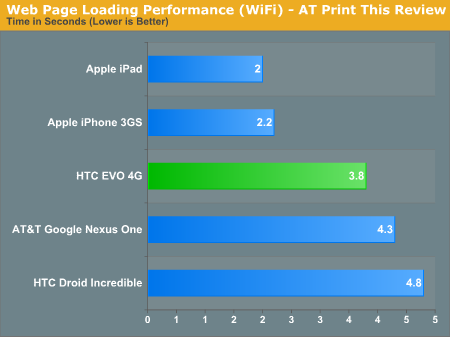 This is quite possibly our most unusual result - the EVO 4G is actually faster than the Nexus One and Incredible. 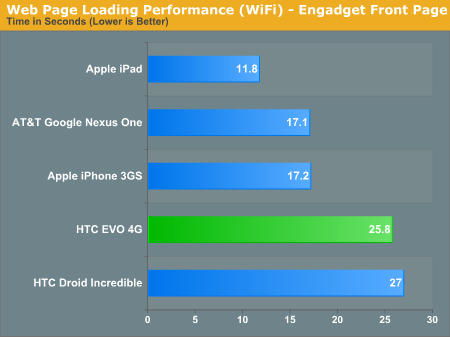 And now we're back to normal, the EVO 4G is about the speed of the Incredible in our longest test. 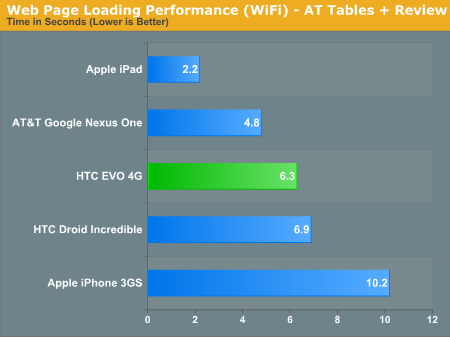 Once more we're a bit faster than the Incredible here.

Javascript performance shows that the HTC phones have the potential to be fast. They both outpace the Nexus One here: 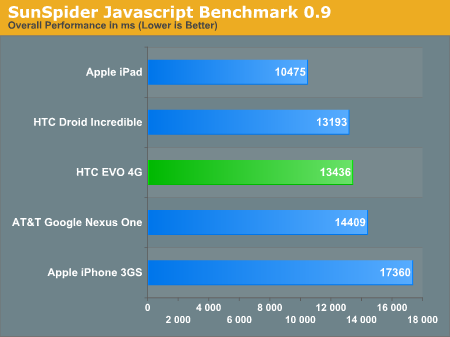 Overall the EVO 4G tends to be about the speed of the Droid Incredible in terms of web page loading performance. Sometimes it's faster and other times it's slower. The Nexus One still loads web pages the fastest, while the Incredible has the smoothest UI.