First, let's get this out of the way: current IGP solutions (outside of the G320M in the latest MacBook) are weak contenders in terms of graphics performance. NVIDIA's old 9400M was already about 50% faster than the AMD HD 4200, and the G320M tripled the number of CUDA cores to provide the most potent IGP we've ever seen. Sadly, NVIDIA's IGP are now stuck in the position of only working with an outdated platform. Given Core 2 CPU performance is still more than fast enough for most users, we'd be interested in seeing non-Apple laptops use the G320M chipset as well, but that doesn't seem likely.

As far as the HD 4200 and Intel HD Graphics in our two test laptops, their performance characteristics are interesting to say the least. When we first played around with Intel's HD Graphics on a notebook, quite a few of the games we tested failed to run properly. Mass Effect 1/2 had major graphics corruption, GRID and DiRT 2 played the intro movies but then showed a black screen, Fallout 3 and Oblivion crashed when we tried to enter the game world (but worked in the menus), Battlefield Bad Company 2 also crashed when we tried to start a game, and the Unigine tests also had some issues. During the last few driver releases, we've seen nearly all of these issues fixed. As for Fallout 3, a hacked D3D.dll that identifies the GPU as something other than Intel graphics is all that's needed—Bethesda apparently hard-coded in a "don't run on Intel" command. That's not to say all games work properly—Bad Company 2 is still a known issue that Intel is working to address—but it's far more than we've experienced in the past from Intel graphics driver team.

For our graphics tests, we first ran a larger selection of games at minimum detail and 800x600 to see how the two platforms handle "reasonable" settings. Where appropriate, we've also included results from the old HD 3200 and GMA 4500MHD laptops to show how things have changed. We'll also show 3DMark results, though we again place far more emphasis on the games than on synthetic benchmarks. On the next page, we'll put graphics performance in perspective by comparing these IGPs with a variety of other laptops at the native 1366x768 LCD resolution. 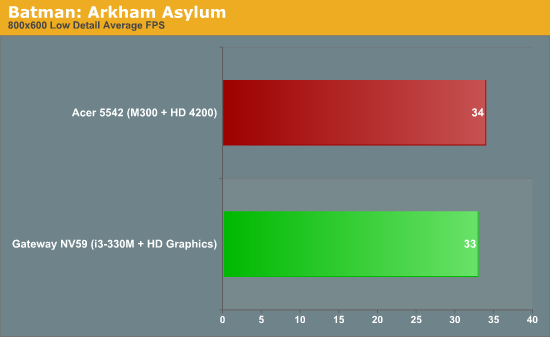 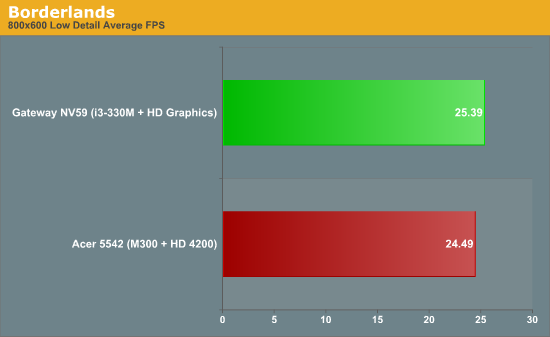 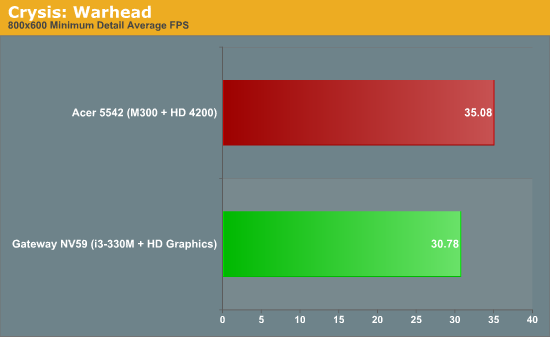 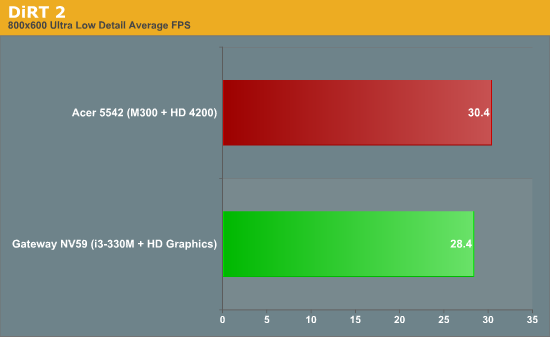 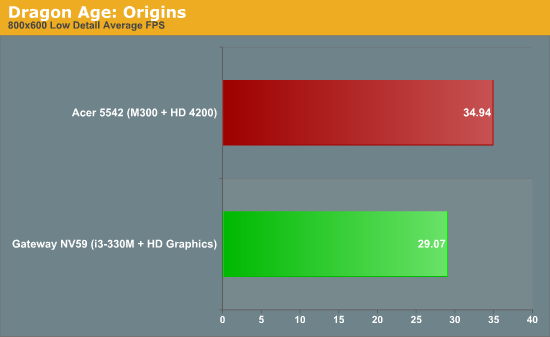 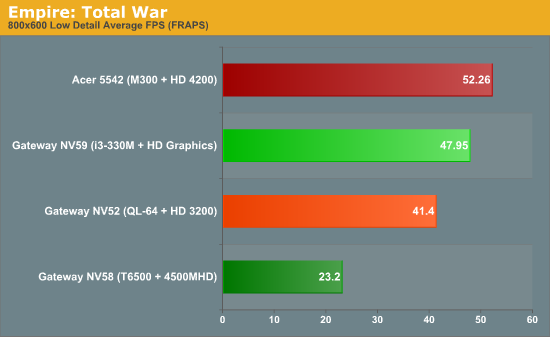 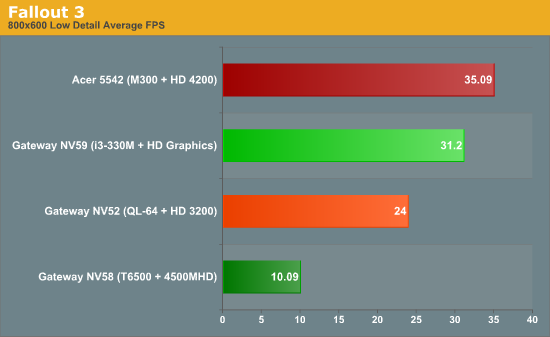 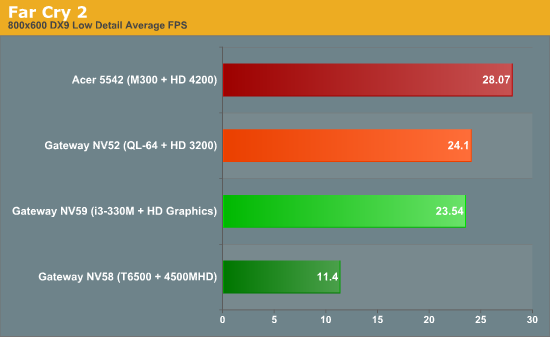 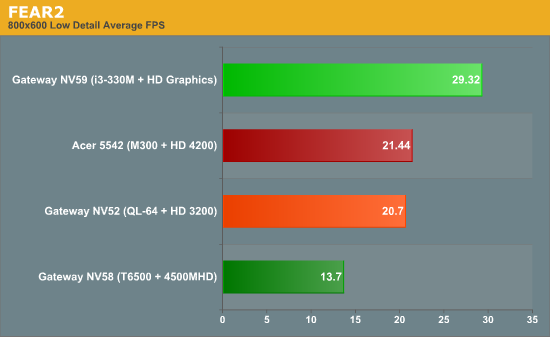 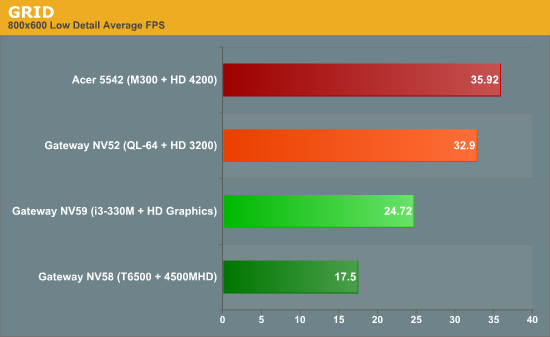 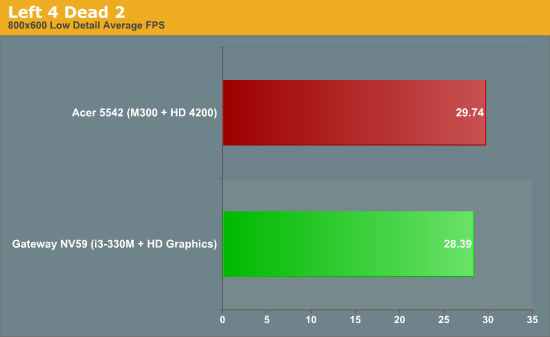 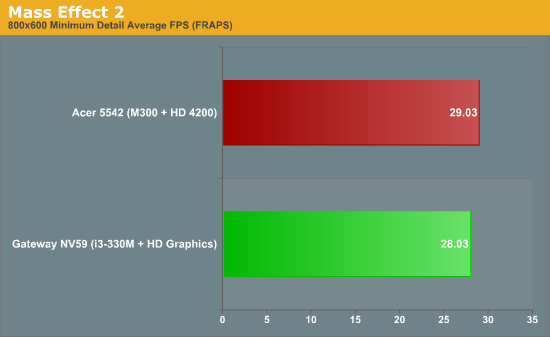 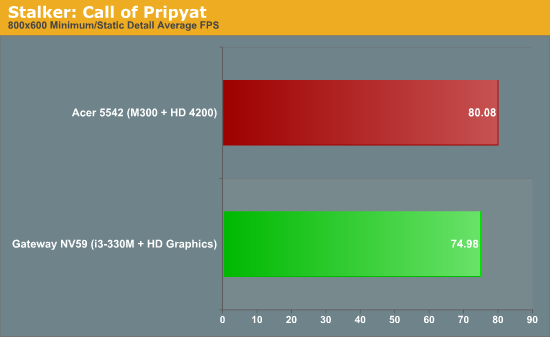 At our minimum performance settings, AMD's HD 4200 leads in most titles by anywhere from 3% to 20%. There are a couple titles where Intel HD Graphics takes the lead, however: 3% in Borderlands, and a very large 37% lead in FEAR 2. We're not talking about stellar performance in any of the games, but nearly all of the titles are at least playable in a pinch. The exception (not shown above) is Battlefield: Bad Company 2, which failed to run on the NV59 with the latest drivers. It requires a minimum resolution of 1024x768, and while it worked on the 5542, performance was dismal (around 13FPS). That's the good news: gaming is possible, and if you stick with pre-2008 titles you can find plenty of games that will run acceptably. The bad news is that in most cases you won't be running at native resolution, which is something the GeForce 9400M could at least manage. Note also, as one reader pointed out, that the i3 mobile processors run the IGP at 667MHz max, while the i5 series bumps that up to 766MHz; that 15% increase in clock would close the gap in many of the game results, though HD 4270 would likewise improve performance with its 590MHz clock. 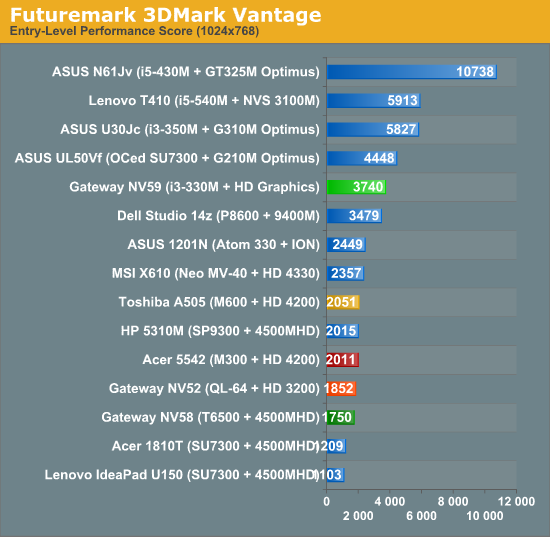 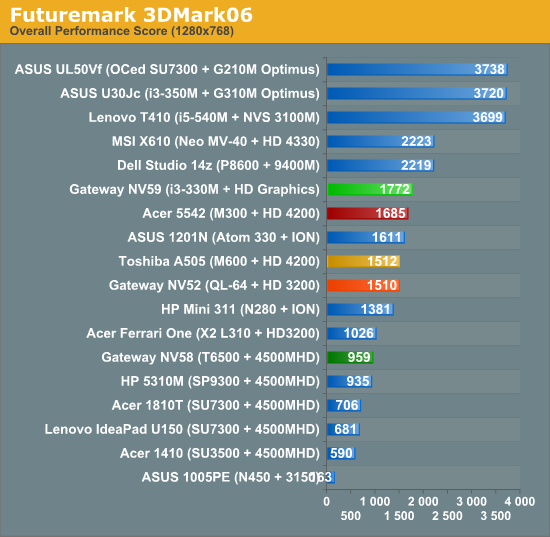 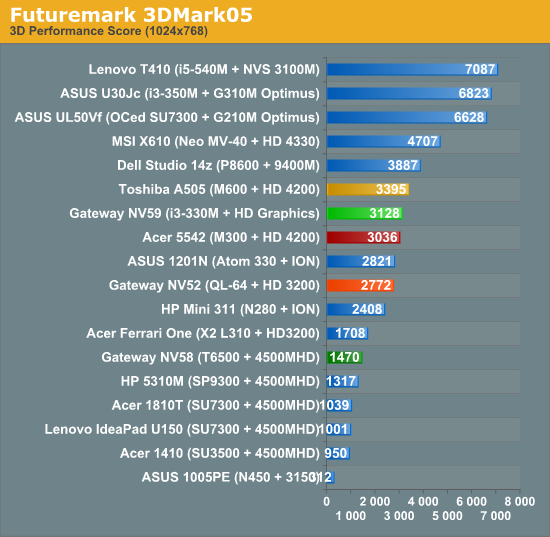 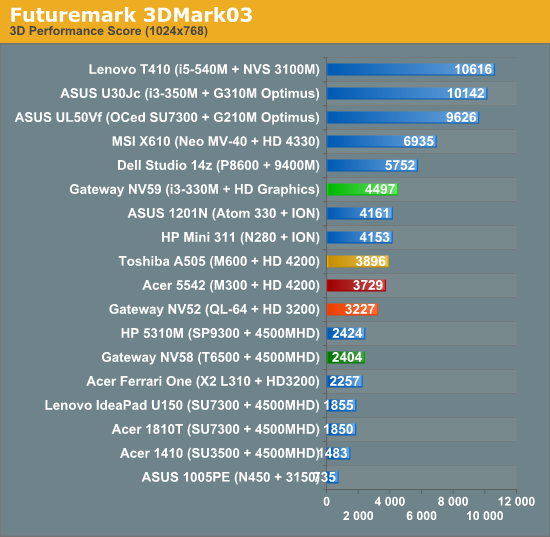 As for 3DMark, the Intel platform leads in all four versions. 3DMark05/06 are in a dead heat, 03 gives Intel a 21% lead, and Vantage delivers a theoretical 86% lead. We find that last a questionable result, and it indicates that Intel may have spent more time working on 3DMark optimizations than on actual gaming compatibility and performance. Ultimately, we don't really care too much about 3DMark performance, regardless of which version you want to run. Some users might like competing for top ORB results, but you're not going to come anywhere near the leader board with any notebook. So let's look at performance at native LCD resolution next, compared with a larger selection of laptops.