Better than our i3-540 for Overclocking?

Part of the attraction generated by the allure of unlocked multiplier processors is the additional flexibility purportedly provided, allowing any manner of clock domain frequency combinations.  The obvious question has to be what an unlocked multiplier set offers the Clarkdale topology?  The real ticket to retaining performance on this platform is to keep QPI frequency as close as possible to processor core frequency. That’s because the memory controller is off-die and the CPU communicates with the memory controller via the QPI link (the data link between the MCP stages in the images below).

Too wide a gap between both clock domains and the CPU must hold data for longer periods of time in the associated buffer stage before it can be transferred to the next bus. As a result, setting too high a CPU multiplier with too low a reference clock (BCLK) would neglect  QPI bus frequency. This is because Intel limits the range of QPI multipliers at our disposal.  What we want to use is a CPU core multiplier that is the same as or one notch higher than the QPI multiplier ratio.

Another thing that becomes readily apparent with the Clarkdale topology is that memory speeds around the DDR-3 1800 mark are generally the upper limit for most processors when absolute stability is required at reasonable voltage levels. Slightly higher speeds are possible but only by sacrificing valuable memory access latency – meaning you have to either run loose memory timings or drop QPI frequency to compensate. Given the choice, we’d sacrifice a little memory bandwidth before sacrificing a lot (lowering  the QPI frequency). With this in mind, all of our comparisons have been made using the highest available QPI multiplier ratio on each processor, with the actual QPI frequency closely matched: 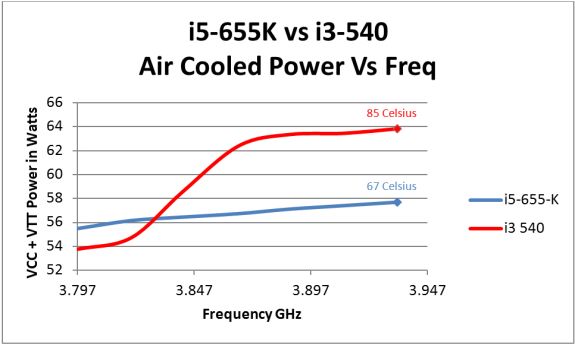 All else being equal, the i3-540 manages to set the pace up to 3.8GHz, by coming in 1~2 Watts lower than the i5-655-K. After that, the i3-540 breaks rank and soon saturates the heatsink. Our retail sample hits its Linpack limit at 3.947GHz – it’s a leaky processor that is not ideally suited to overclocking using Intel’s stock cooler.

On the positive side, at least the i3-540 is not troubled by utilizing high QPI ratios and the same memory speeds as the i5-655K within this frequency band. The power disparity we see here is not due to memory controller power, but rather the CPU cores (we tried lower QPI ratios and they did not help).

If the disparity we’re seeing here can be attributed solely to Intel’s binning process -assuming power-envelopes and thermal dissipation are key parts of segregation criteria - the higher switching efficiency of the i5-655K (and i5-650?) cores makes it a better overall candidate for overclocking on the stock Intel cooler.

We’re not finished with the i3-540 comparisons just yet though, there’s more to come in the water-cooling section…