The Keyboard & Using it

Setup of the keyboard dock is simple, it is just a dock with a keyboard attached to it. Slide the iPad on and everything is good to go. The OS was designed around the keyboard. The keyboard itself is a trimmed down version of Apple's standard aluminum keyboard that you get with desktop Macs. If you're a fan of the chiclet design, you get great tactile feedback and overall one of the best keyboards out there in my opinion. I'm also a fan of Lenovo's ThinkPad keyboards if that helps put my opinion into perspective.

The lock key on the keyboard immediately locks the iPad. Tap it again to unlock. There's a home key and a search key. You can adjust brightness, skip between songs in the iPod app, adjust/mute volume and even bring up the virtual keyboard by hitting one of the top row of function keys.

Many keyboard shortcuts work. Cmd + X/C/V still lets you cut/copy/paste. The keyboard has arrow keys so you can shift-select text and delete/copy/move it. Even some OS X keyboard shortcuts work. Cmd + Up/Down will move your cursor to the very top or bottom of a document. Others don't translate quite as well. For example, hitting option + delete will delete the first word to the left of your cursor. Unlike in OS X however, it will also delete the preceding space. Let's say I delete the word "something" in the following sentence using the option + delete keystroke: "The quick brown fox did something". In OS X my cursor would end up one space away from the last d in did. On the iPad, my cursor would be right next to the last d. 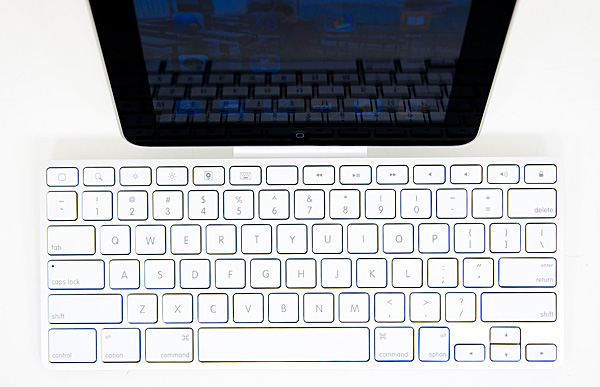 Formatting shortcuts are absent as well. Want to bold text? Cmd + B won't do anything for you in Pages. You'll have to tap the B button at the top of the screen.

With the physical keyboard you retain the iPad's limited autocorrect functionality however I found myself generally typing faster than the suggested words had the chance to appear. For example, if you type netbook the iPad will by default suggest "net book". With the keyboard dock, if I want to type netbook and not have it autoreplaced with net book I have to type the word then wait a fraction of a second for the suggestion, then tap the X button to close out the suggestion and hit space to go on. If I just type at regular speed the iPad won't even have the opportunity to pop up the net book suggestion before I hit space, which means the OS will assume I wanted the correction and substitute it in for me. It's frustrating but this is one reason I'm thankful Apple toned down the autocorrect on the iPad.

That's not the only autosubstitution problem I found. In Pages if you put two spaces after a word using the virtual keyboard the app will automatically end the previous sentence with a period and begin a new one. Do the same with the physical keyboard and there's no period. Obviously you don't need the little shortcuts as much with a physical keyboard, but it's annoying.

More important than the missing auto-period is the fact that there's no easy way to switch between apps using the keyboard dock. Cmd + tab doesn't do anything (perhaps it will in OS 4?) so you're left with hitting the home key, tapping a new app and going from there.

You also can't do things like use the arrow keys to scroll through a web page and Cmd+L won't let you type in a new URL in Safari. There's no reply to email shortcut either. Despite the addition of a physical keyboard, the iPad is still all about a touch interface. Thankfully the screen isn't very far away from your hands given that it's docked about a centimeter away from the top of the keyboard. 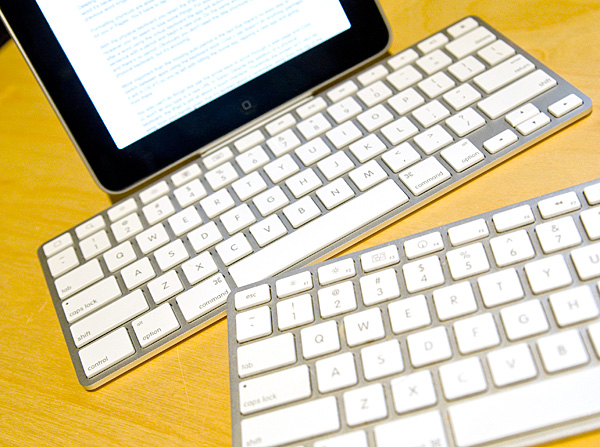 Switching between the iPad's touchscreen and the physical keyboard actually felt more natural than I expected. I think it has a lot to do with the close proximity of your hands to the iPad while you're typing. Building the keyboard into the dock (or vice versa) was actually a very smart move in this sense. The whole thing, when assembled, works more like a mini iMac Touch rather than a silly tablet + keyboard combination. I'd say if you plan on making your iPad a permanent computing device in your life, the keyboard dock is perfect for getting work done while at home. At this screen size, I'd argue that a multitouch interface does work very well for a desktop. I do wonder how well it'd scale to a more iMac-sized device, but I smell potential.

One of the most frustrating aspects of the iPad keyboard dock is the fact that it doesn't work if you have your iPad in Apple's case. The dock connector can't make good contact with the port on the iPad. Meaning whenever you want to dock it, you have to take off the case and put it back on after you're done. This is a definite buzz kill for the grab and go folks.

And you'll need that case because the iPad keyboard dock only works in portrait mode. If you want to watch a full screen video on the iPad, you'll need the foldable case so you can prop it up in landscape mode. There are some elements of the whole keyboard dock setup that really do seem like Apple thought of everything. The keyboard shortcuts, the face that the virtual keyboard stays hidden when you have it connected. But then there are other obvious problems that weren't solved, like the issue of landscape mode and not being able to work with Apple's own case. My guess is that Apple thought of it but just saw the keyboard dock as a very focused device - for someone who wants to use their iPad for writing longer documents while retaining its portability.