The Intel slide below gives you an overview of the available SKUs. 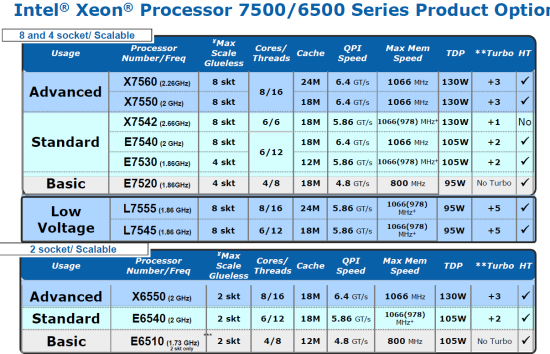 Only the top Xeon X7560 gets the massive 24MB L3 cache. The two top CPUs, the X7560 and X7550, have eight cores and can speed up their clock speed by 400MHz (via Turbo Boost) if several cores are idle. That is quite handy: if there is no virtualization layer, single threaded tasks do happen quite often even on an eight socket, 64 core machine. Speeding those tasks up by 20% can save some valuable time. When all cores are busy but not at 100% load, the CPU will probably be capable of running a speed bin higher. For example, Intel's performance engineers in Portland report that the SAP benchmark, not really a low CPU load workload, runs about 3% faster with Turbo Boost.

For all Windows 2008 users, Turbo Boost is probably going to be disabled. We learned through experimentation that the most likely power plan, "balanced", does not use Turbo Boost. Turbo Boost is only available when you use the "high performance" setting. Use this power plan setting and Windows 2008 R2 uses the highest clock possible. Look at the picture below. 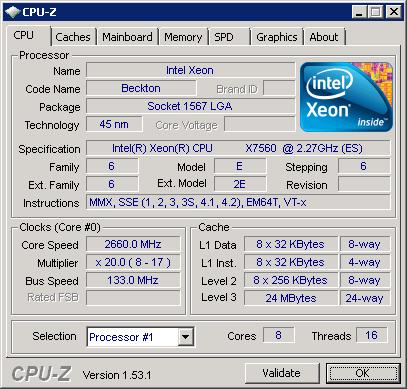 The different strategies of Intel and AMD get tangible when you look at the price list. Intel wants "RISC-like" prices for its best CPUs, with four CPUs costing $8000 to $12000. Those markets that demand the reliability features for running expensive applications will not worry about this. But if those reliability features are not on the top of checklist and price/performance is, AMD's aggressive pricing is very attractive. AMD's cores might be slower, but AMD offers more cores at higher clock speeds at a lower price. Four of the best Opteron 6100s will lower your budget by $4000 to $5500.

The low power versions of the Xeon Nehalem EX are unattractive. For example, the TDP of the L7545 is only 10W lower than the E7540 but Intel demands a $700 premium. The fact that the Nehalem EX is still a 45nm chip seems to have limited the options for low power chips. Of course, the demand for lower power chips in quad-CPU machines is low, albeit growing.

The Xeon 6500 series are no bargains either. Limited to only two CPUs, they lack the scalability of the 7500 series. The only thing you get in exchange is a meager $300 price cut. The 6500 series do make sense, as they can use up to 32 DIMMs and have all the reliability features of their big brothers. But Intel missed a chance here: many people are RAM limited, not CPU limited, when virtualizing. And not all of them are willing to pay a premium for reliability features. These people will probably turn to AMD.

It all boils down to two questions: how much memory do you need and how much are you willing to pay for reliability features? The more memory and the more reliability you demand, the more the 7500 series reliability features make sense—ERP and database applications are a prime candidate. For virtualization, you have two options. Some of you might prefer fewer, more reliable machines. Others may leverage the fact that HA (High Availability) is pretty easy with modern virtualization platforms and go for less RAS feature rich servers and get the availability by HA software instead of RAS features. Our first bet is that the low pricing of the AMD quad-CPU servers might seduce a lot of system administrators to go for the latter. Let us know what you prefer and why.