For general applications, the GPU is less important and so the M11x is going to end up quite a bit slower than many other "midrange" laptops. We should see about the same level of performance as the ASUS UL50Vf, with slightly better scores from the 7200RPM hard drive. That's the theory at least. As noted earlier, the actual overclock appears to be 1.60GHz instead of 1.73GHz, which means the UL50Vf is clocked 8.3% higher and should outperform the M11x except in cases where the faster HDD and/or GPU come into play. We've colored the N61Jv black and the UL50Vf gold for ease of comparison in our application benchmarks. 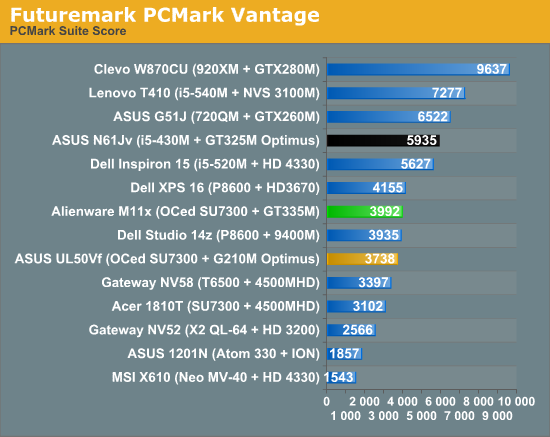 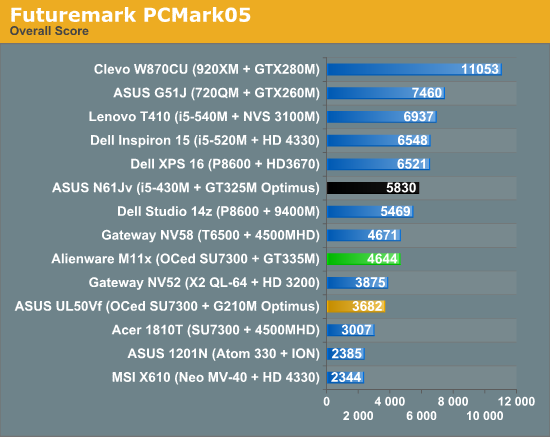 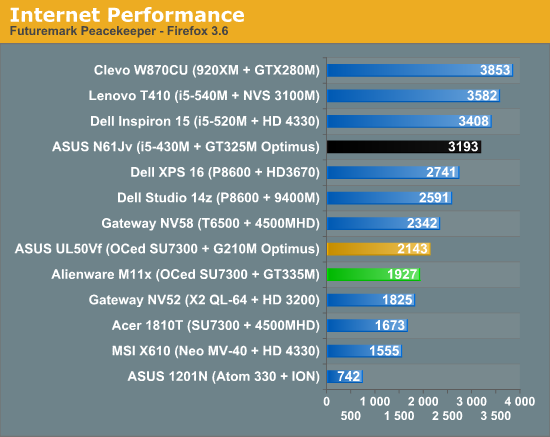 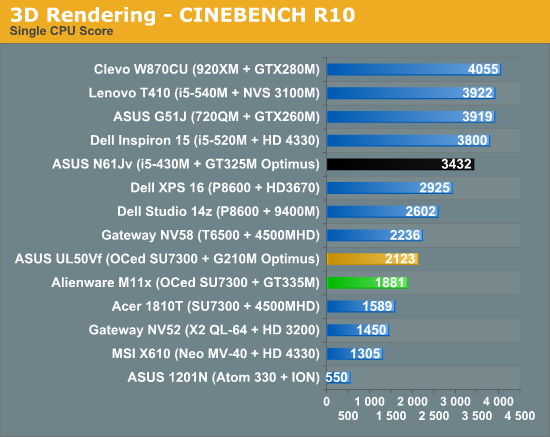 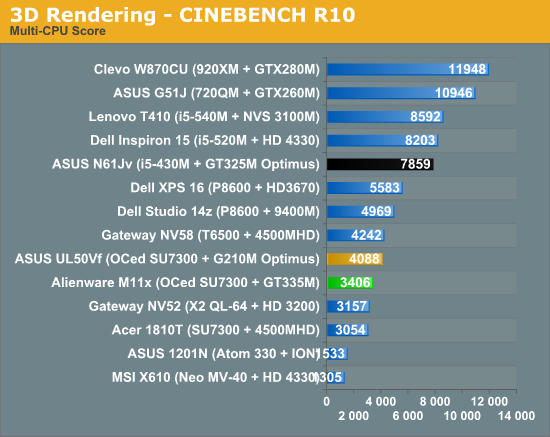 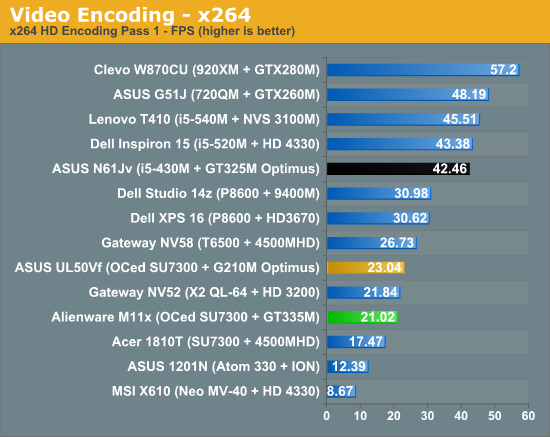 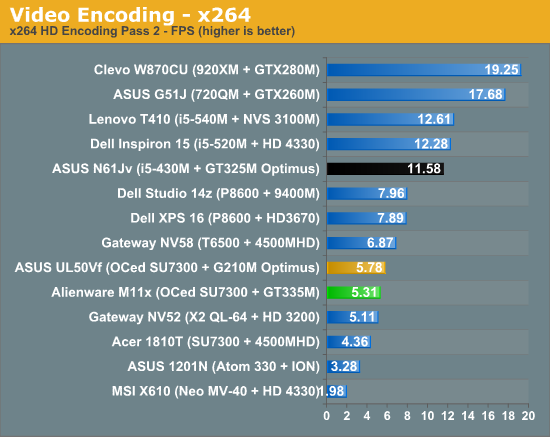 As expected, the M11x ends up beating the UL50Vf in some tests and trailing in others. It's 25% faster in PCMark05 (mostly from the GPU result, it appears), 7% faster in PCMark Vantage (GPU and HDD), but around 10% slower in the CPU-limited tests of Peacekeeper, Cinebench, and x264 encoding. Again, it's odd that Alienware would limit the multiplier to 6x when overclocked but then claim to have a 1.73GHz CPU. Note also that in overclocked mode, the various power saving CPU functions don't seem to kick in—CPU-Z reports the processor running at a constant 1.60GHz instead of dropping to a 4x multiplier when idle.

Does any of this really matter? In terms of getting acceptable application performance, not really: practically any dual-core CPU will be fast enough for general computing, and if you're doing 3D rendering or video encoding you should be using a different tool. (NVIDIA would of course recommend Badaboom with CUDA for video encoding, and we admit that it's quite speedy on the GT335M.) If on the other hand you believe in truth in advertising, Alienware needs to update the BIOS or update their web page. We'd also like to see SpeedStep functioning with the overclocked CPU, as we've seen that work on the ASUS laptops. 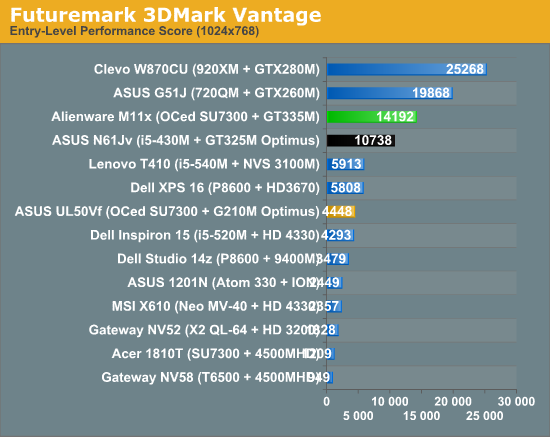 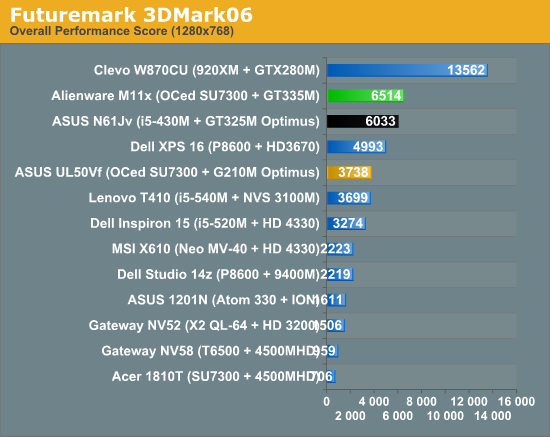 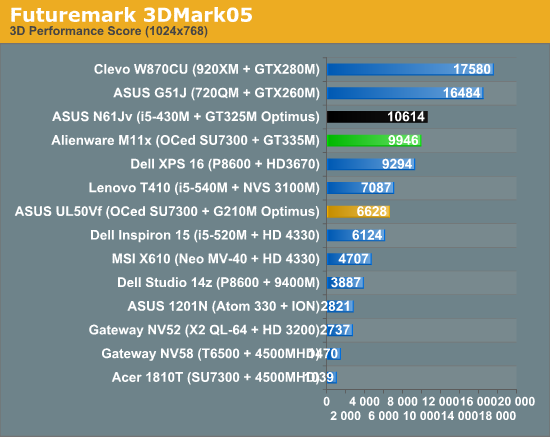 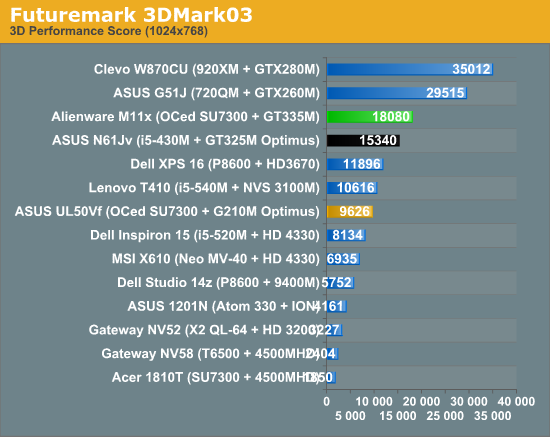 Our final stop will be the 3DMark results. Yes, they're synthetic and we've already looked at gaming performance. For those that like to see the numbers, though, we've included them as usual. The M11x makes short work of the ASUS UL series, with scores that are anywhere from 50% to 220% higher. 3DMark Vantage shows very close to linear scaling with the shader processing power of the GT335M compared to the G210M. (The M11x also manages to run Vantage at Performance defaults (but 1280x768 resolution) with a reasonable score of P3217, if you're wondering.) The N61Jv matchup is a bit more sensible, with the M11x leading by 7% in 06, 18% in 03, and 32% in Vantage… but oddly it trails by 7% in 3DMark05. Now you know why we take 3DMark results with a large dose of skepticism; the 3DMark results are only truly indicative of 3DMark performance.