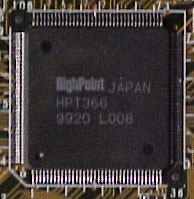 The HPT366 controller features its own BIOS so devices attached to the two HPT366 channels are initialized after the power on self test (POST). The HPT366's BIOS is not user configurable by default, so all devices attached to it are autodetected every time the system is powered on. This adds a few seconds to the boot time of your system, but it's essentially the equivalent of adding a SCSI controller in terms of the length of increase of the boot time.

As you might be able to guess, the HPT366 throws off the normal boot sequence parameters in the Award BIOS setup as there is no option to have an external HPT366 controller your primarily boot device by default. ABIT made two small modifications to the BIOS features setup of the Award 4.51PG BIOS setup. The first was the addition of the 'EXT' device to the boot sequence selection option and the second was the configurable option 'EXT Means' with SCSI and UDMA66 as the two options for that setting. Just as you'd select the SCSI boot device option if you wished to have your boot drive be one attached to an external SCSI controller, you do the same with the 'EXT' device on the BP6, you just need to let the BIOS know whether boot from EXT means boot from a SCSI controller or the HPT366 controller.

The HPT366 controller does require driver support which is provided for by a supplied drivers disk that includes both 9x and NT drivers for the controller. ABIT provides a nice explanation of how to install NT 4.0 with the UDMA/66 driver on their website

The rest of the board, including the features of the Award BIOS are pretty much identical to that of the BX6R2. As with the BX6R2, an option in the BIOS allows for the IRQ of any specific PCI slot to be statically assigned, not only eliminating many problems with unfriendly PCI devices that simply refuse to work in certain configurations, but also making transferring hard drives from one system to another quite a bit easier as you can assign the IRQ's for all devices to specifically reflect a previous configuration.  The static IRQ assignment of the BE6/BX6R2 was a feature highly demanded by many owners of the BH6 and the original BX6 and is a feature that is quickly appearing in the BIOS setup utilities of most other motherboards.

Power management consists of pretty much the standard stuff these days. Wake on LAN and wake on modem ring headers are available to allow the system to power on in the presence of network activity or incoming call. The BIOS can be set to turn on the system at a specific time. The CPU fan can be shut off when the system suspends to quiet things down a bit. Full ACPI support is included for additional power management options under an ACPI compliant OS, such as Windows 98 or 2000.

ABIT's highly regarded User's Manual makes its presence felt in the box of the BE6, giving users a step-by-step installation and a configuration guide for their system.  The ABIT manual includes a fairly easy to read and useful explanation of the BIOS and CPU setup, and makes the overall experience with the BE6 (especially for first time system builders) a pleasant one. The BE6's manual in particular includes helpful tips on how to install the device drivers for the HPT366 controller as well as more background information on the various features of the motherboard.

Hardware monitoring is provided courtesy of the Winbond 83783S hardware monitoring chip. This is a stripped down version of the 83782D chip that differs in the number of voltages monitored (5 vs 9), external temperatures (1 Vs 3), and fans (2 Vs 3) that are monitored. The voltages measured are Vcore, 3.3V, +5V, and +/- 12V. External temperature is provided via an included thermistor with one of the longest cables we've seen from a manufacturer. The Winbond 83783S is incapable of reading the CPU temperature from the on-die thermal diode, which of course would be the most accurate method.