For those of you sticking with Vista, Microsoft has finally officially released DirectX 11 for Vista, after having spent the last couple of months in beta. This final release looks to be the same as the last beta released earlier this month.

The update is KB971512, which is being released as part of a larger Platform Update for Vista that includes a few other things that are being backported for Vista. Vista SP2 is the prerequisite, so if you aren’t already on SP2 you’ll need to update.

All of these updates should be available on Windows Update.

We ran a quick sanity check on our Vista install from our Win7 Performance Guide from earlier this week, and there are no surprises. Just like with DX10, DX11 titles (all 2 of them ) perform the same between the two OSes. In this case we’re using BattleForge, along with Unigine’s DX11 Heaven benchmark (it’s synthetic, but pickings are slim for DX11). We’ve also thrown in Crysis for good measure, although it's not a DX11 title. 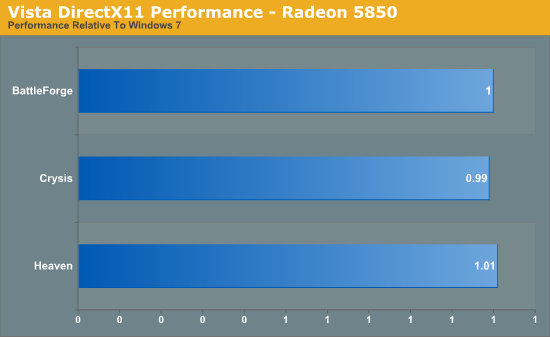