Sorry folks, we actually have another shameless P55 motherboard picture preview for you. I know Gary thought his ASRock article was the last of them, but EVGA released us this evening to discuss their flagship P55 (E657) FTW (For The Win) product. We know you are urging us to break rank at this point and post up some heavy overclocking benchmarks and performance comparisons against the i7 platform, but there is little chance of getting away with anything other than a few pictures to look over until the platform embargo lifts.

We are not quite sure at this point of how many users will be attracted to higher cost i5 boards given the fact that that total platform cost overlaps the cost of entry-mid level i7 offerings. However, this has not deterred any of the big players from putting together a top-end i5 package based upon a combination of features they think will reel in customers. Early pricing lists of i5 boards are putting the top-end offerings between the $200~$250 mark, this one is no different with an estimated MSRP of $250 (there will be a few sub $200 models offered as well as an NF200 'Classified' variant of the board we're previewing today). 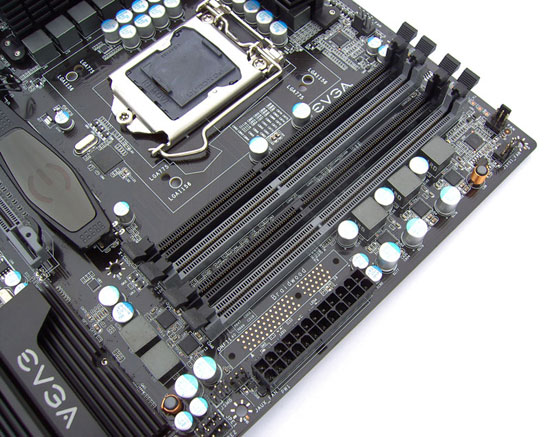 Any board following in the footsteps of the EVGA X58 Classified has a lot to live up to. Early overclocking tests on the i5 platform have revealed a similar trend to what we saw on the X58/i7 motherboards when used with sub-zero cooling, with the top-end EVGA P55 boards ahead of the competition by the slimmest of margins as we move into the final tweaking stage before full retail release.

It is not a massive gap at this point, we are talking a 3-5 BCLK difference between this board and the ‘best of the rest’ given the same hardware configuration and voltages. For the more conventional user (those using air and water cooling), our take is that you won’t find any overclocking advantage comparing one enthusiast board over another, assuming functionality is completely up to speed.

There are a number of unique hardware features that EVGA hopes will help keep their top line boards ahead of the pack when really pushed by an enthusiast. EVGA has gone the extra mile by providing onboard hardware components that make fine adjustment compensation for all major signal lines possible among other items. Team these functions with sub-zero boot-up & current limit manipulation jumpers and we begin to see that EVGA is making a full assault for the P55 overclocking crown. 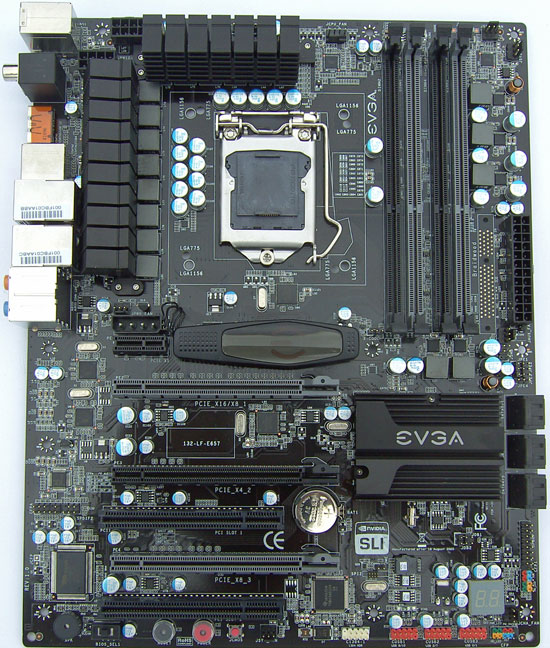 Companies such as EVGA, DFI and MSI continue with a purist approach to PWM design for all major power rails. We happen to sit with the camp that believes in the importance of fast transient response and low noise attributes first. The proof is in the pudding and we’re eager to compare several boards side by side to see if any additional overclocking headroom can be realized that supports the ‘more phases=unconditionally better’ theory.

Initial in lab tests indicates that the only thing that really matters from a user perspective is that the given PWM design is capable of pumping out the required current comfortably and cleanly. The rest comes down to heat management and ease of cooling; anything more seems to be a matter of marketing rather than real substance. 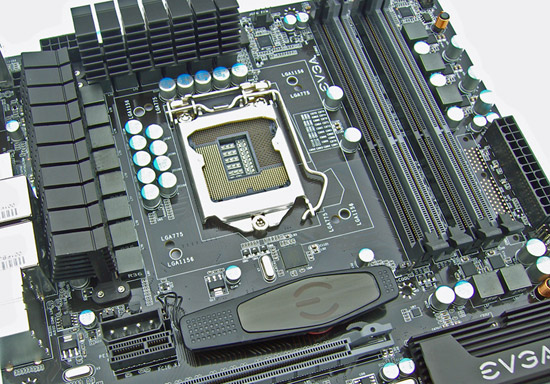 In the case of the E657 FTW, CPU power is supplied by a 600W peak current capable 12-phase supply (more than i5 will ever need). VTT and memory power is supplied by 2 and 3 phase supplies respectively, both using the same model of FET’s as used for the CPU. You’ll also notice that EVGA has added socket 775 mounting holes at a slight angle from the 1156 holes, a welcome addition for those of you with a good 775 heat sink or those of you concerned about needing new socket mounts for those trusted LN2 pots and phase change coolers.

The rear panel contains 6 USB ports, PS2 keyboard port, 2 ESATA ports, 1x1394a port, dual Marvell Gigabit LAN ports and the audio panel driven by the popular Realtek ALC889 HD codec. A CMOS clear button is provided on the rear panel for ease of use when the board is mounted in a case. 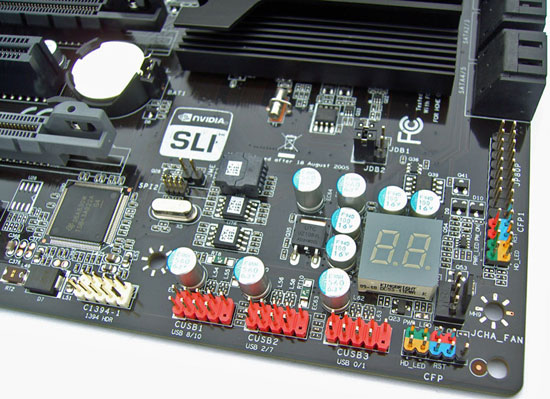 A Hex postcode display is available for debugging purposes together with an output connecter for EVGA’s OCP (overclocking panel) which helps users work around the somewhat quirky boot-up voltage requirements of sub-zero cooled processors. An additional 6 USB ports are supported via internal headers, plus an extra 1394a header.

Three onboard BIOS chips are present allowing users to store different BIOS revisions for testing purposes or as a failsafe backup. BIOS chip selection is made possible by a simple three-position slider switch placed at the lower left corner of the board. 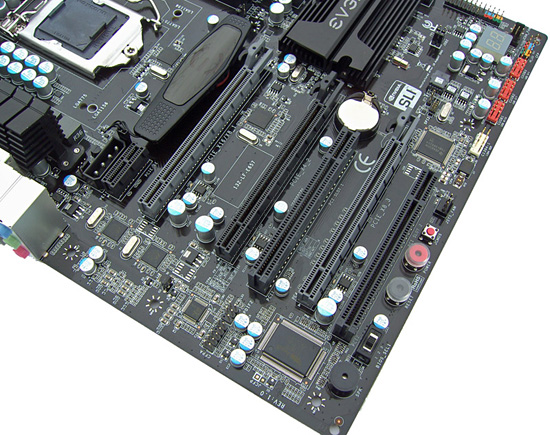 Looking over the slot layout; we have one PCIe 2.0 x1 slot, two PCI slots, and three PCIe 2.0 x16 slots providing x16/x4 or x8/x8/x4 lane allocation (depending upon usage). Seven (1 CPU + 6 additional) fully controllable fan headers are placed in various locations, five of which are easily accessible at all times regardless of component loading.

Onboard power, reset and CMOS clear buttons are placed at the lower edge of the board for those of us that like to test and use boards on an open testbed (the reset button doubles up as a flashing LED to show SATA activity).

That about rounds up today's quick preview, the official release is not far off so please bear with us...