I was in Taiwan yesterday for a brief stopover, and with Enermax being close to the airport I took the opportunity to have a visit their HQ in Taoyuan. The best place to find new products is the R&D department. I actually found the engineers testing a new series Enermax will be releasing very soon - it's not for all markets, but the U.S. might see it. It’s called the Eco 80+ series, and for example it won't be available in Germany since the managers for the German market decided the Modu82+ and Pro82+ are still selling too well. 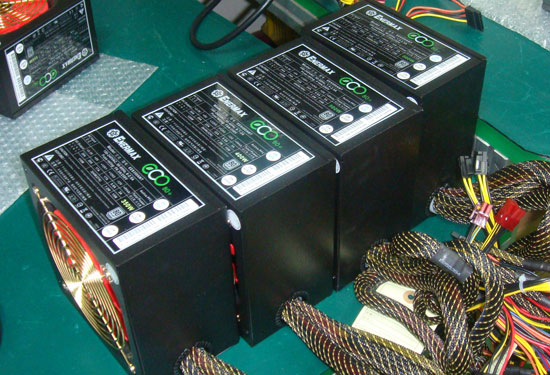 This series has a new kind of fan installed that Enermax also sells separately in retail channels. As you can see in the pictures, the fan is red and is named Magma. The fans are supposed to be very quiet due to their specially designed blades. The series will start at 350W, which is a good step in the right direction. The next higher wattage is the Pro82+ at 385W. There will be also 400W, 500W, and 620W models, which are the typical wattages that cover most of the entry to midrange field. As far as we could see, all of the capacitors are made by Nippon Chemi-Con, a high-end Japanese manufacturer. We couldn’t get any word on retail prices and availability yet, but Enermax will be introducing this series pretty soon.