It has been around four years since Cooler Master first introduced their gigantic Stacker case. This was by no means the first full-tower case on the market, since companies like Chieftec (and plenty of others) have been selling them for ages, but it did spark the beginning of enthusiast hype for such cases. I lived in Taiwan at the time and provided a review of the case; from the professional perspective, there were some features and problems that needed additional tuning. A week later, I met with reps from Cooler Master at their Taipei headquarters to discuss the matter. One thing that became abundantly clear is that it takes more than just a bunch of engineers to build a high-quality, high-performance computer chassis. You can do all the calculations you want on paper, but it's not until your project is in the hands of enthusiasts pushing the limits that you can truly call it a finished product. Later, Cooler Master provided what we would almost call a "secret" update that tweaked the design. 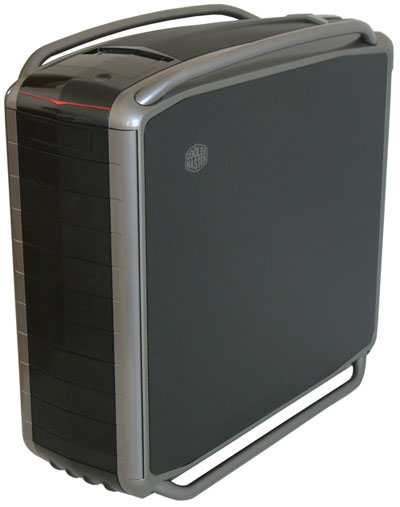 Flash forward to today, and it seems like forever since Cooler Master introduced the Cosmos S chassis. We wanted to provide a few pictures showing the details of this design and discuss the ever-evolving cooling systems manufacturers come up with. As you might expect with a modern chassis, the Cosmos S has the ability to mount numerous 120mm fans -- up to six 120mm fans. The majority of these fans blow air out of the chassis; only one front fan and the bottom fan serve as intake fans; however, there is also a 200mm fan on the side blowing air into the case. The one large 200mm fan should provide roughly the same amount of airflow as the two 120mm exhaust fans, so the interior of the case should maintain good airflow and avoid the creation of a low pressure or high pressure interior. As you might expect with the number of fans, there is the potential for a tremendous amount of airflow and the result is that dust accumulates quite quickly. The case comes equipped with three 120mm fans (including the 120mm fan on the hard drive cage), plus the 200mm side fan. The whole front of the case is perforated to provide for airflow, and after just one week there was already a significant amount of dust. Cooler Master uses air filters on the openings to catch the dust, and these are typically easy to clean, but you will definitely want to do so on a regular basis.

Cooler Master is promoting the Cosmos S as their flagship product in their case portfolio, which is immediately apparent when you begin unpacking your case. Of course we have a large box, but when you remove the case from the box you find a large brown bag with a Cooler Master logo. There's no real purpose to the bag other than protecting it from the usual dust and Styrofoam bits during shipping, but it does help to convey the feeling that you purchased a high-end product. The majority of the internal chassis structure is composed of aluminum, with a predominantly plastic exterior. The case has a futuristic vibe, and it sort of looks like a Cylon from the Battlestar Galactica TV series when viewed from the front.

Opening the case does not require the removal of screws or even thumbscrews; just pull up the lever at the back and the side door swings open, at which point it can be removed. The hinge and locking mechanism on the side door are very well constructed, so despite the ease of internal access there's no additional vibration when the system is running. At the front of the case are seven 5.25" optical drive bays, assuming you use the hard drive cage as Cooler Master suggests. The drive cage can hold four hard drives and has a single 120mm fan at the front that blows air across the hard drives. Most users should find four hard drives sufficient, but if you prefer you can add additional hard drive cages. Each cage uses three 5.25" bays to provide four 3.5" mounts, so if you go with a single optical drive and three hard drive cages you could mount up to 12 hard drives -- and you would also be adding two more intake fans. This modular approach is good in some ways, but it would have been better if Cooler Master had shipped at least two hard drive cages. We can't imagine many people will need four let alone seven 5.25" bays, whereas additional hard drives seem a more likely use. Another complaint with the drive cages is that they are made of aluminum, and the drive bays are also composed of aluminum, so the two parts don't slide against each other very easily. It can be quite difficult to remove the drive cages from the chassis, and a minor tweak using plastic slides would have improved the situation.

Following the recent trend in full-tower cases, the power supply mounts at the bottom of the chassis. A nice feature is that there's an opening directly below the power supply equipped with a dust filter, which will work perfectly with power supplies that have a 120mm fan on the bottom -- although PSUs that have a fan at the rear won't benefit. The positioning of the opening is also designed for "normal" ATX power supplies, so larger power supplies may not align properly with the opening. Should you choose, you can also mount power supplies with the fan facing upward, so that it would serve as an additional exhaust point for the interior of the chassis. Considering the chassis already has plenty of airflow, however, this shouldn't be necessary, whereas giving the PSU direct access to cooler air from below can be beneficial. In short, we would recommend purchasing a power supply that matches well with the positioning of the bottom air intake.

The case comes equipped with one 120mm fan on the top, and you can add up to two additional fans by removing the top cover, which is done by loosening one screw on the upper-rear of the chassis. The three 120mm fan mounts at the top of the chassis are all adjacent to each other, providing an ideal location for water-cooling radiators; two or three fan models should work. There's enough space between the motherboard and the top of the chassis to fit such a radiator, and at the back of the case Cooler Master even includes two ports that can be used for tubing for external water reservoirs. This case definitely appears to target water-cooling, and Cooler Master explicitly mentions on their website that CPU coolers taller than 4.7" will not fit into the chassis. It's possible to install larger coolers, but first you would need to remove the large 200mm fan on the side, and why would you want to purchase this case if you're just going to remove one of the major features?

Installing optical drives is easy; you simply slide them in through the front of the chassis and they lock into place by pressing the corresponding blue button. This is simplicity at its best. There's also room behind the motherboard tray where you can route cables, allowing you to keep a clean interior. There are openings all around the motherboard area to facilitate this, so cable management is very good. With the entire case assembled, the system turns on with a touch of your finger, rather than the normal tactile mechanical switch. Unfortunately, the case doesn't include a reset button, which most enthusiasts continue to use. 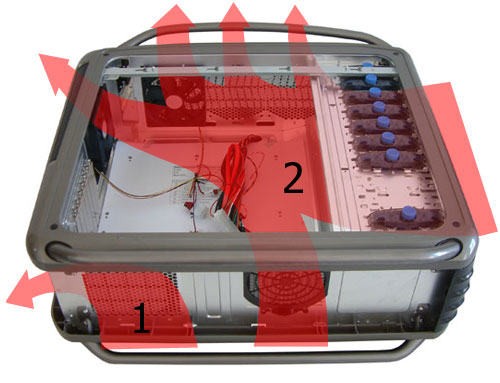 Clearly, this case is designed with the enthusiast in mind, specifically the high-end enthusiast that will need plenty of cooling. The case ships with three 120mm fans and a large 200mm fan on the side, which should provide ample cooling for all but the most extreme systems. Water-cooling would definitely be the way to go for such extreme setups, of course, and the chassis accommodates such configurations with aplomb. The power supply also gets ample cooling, since it gets direct access to outside air through the bottom of the case. Hard drives are also cooled via direct air from the outside, which then flows towards the graphics card area. Perhaps more importantly, the large 200mm fan blows directly at the expansion card area, which modern dual-slot GPUs can then expel out the rear of the system through their mounting brackets. Despite the number of case fans, they did not get very noisy during actual use -- fans from graphics cards, motherboards, and the CPU are often louder. If you don't plan to run a top-end configuration, you could even disable many of the fans as we didn't measure significantly higher temperatures without the extra cooling. The hard drives showed the greatest difference, with temperatures increasing by 6°C when we disabled the front fan.

Overall, the build quality is very good and it's clear that Cooler Master has spent a lot of time and effort in the design of the Cosmos S. It's quite easy to make a really large chassis and call it quits, but the result is often poor airflow caused by turbulence. In fact, sometimes you get worse cooling and airflow in a large chassis because of the amount of empty space, since a smaller case allows the manufacturer to better direct airflow. This is definitely not a case that will cater to every user, but enthusiasts and particularly those that are interested in water-cooling will find a lot to like with the Cosmos S (RC-1100-KKN1-GP). Pricing is currently €190 including 19% tax, or around $210 in the US. That's a lot of money for a computer case, but the overall design quality is extremely competitive with other offerings in this price range.