On the last day of MIX10 I got a very special chance to sit down for a little over an hour with Andre Vrignaud (who works with the Advanced Technology Group at Microsoft on Xbox LIVE) and an ASUS-built WP7S prototype. We proceeded to have a discussion about the future of the platform with a copy of it in front of us. 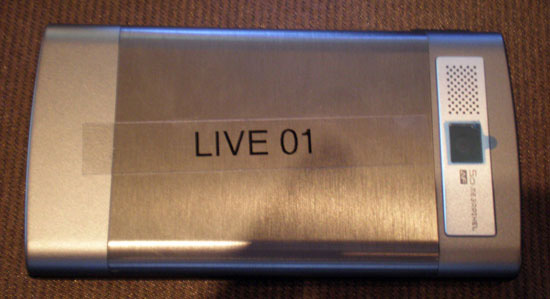 The first thing we did was fire up a copy of the XNA-framework-leveraging gaming title, "The Harvest." If you haven't noticed already, this simple yet compelling game demo has become the paradigm example Microsoft has selected to advocate two core features it hopes make WP7S a compelling gaming platform. I've gone over this previously, but bear with me. First is the power of code re-use across what Microsoft is calling the "three-screens" users interface with: TV (through Xbox 360), the desktop (Games for Windows), and now WP7S. 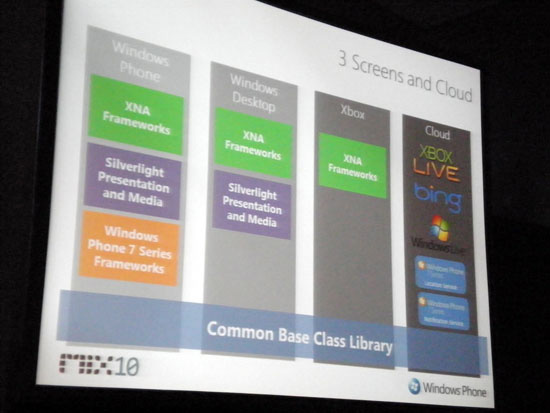 The Harvest reuses 90% of its code between the three platforms, as well as virtually all the artwork and textures, and was developed in 3 weeks by developer Luma Arcade. With the exception of the input paradigm, which is different from Xbox to PC to WP7S, this is virtually the exact same game running at the exact same resolution across all three screens. Second is the power of leveraging cloud services already offered by Microsoft like Xbox LIVE for seamless integration across those three screens. That means the same avatar, same friends, same communication tools, and potentially even persistent gamestates across them.

I managed to get continuous video of the device booting (so we can see the boot splash screen), a bit of interface, and 80% of the level:

I snagged what I believe to be the first photo of WP7S' boot splash screen. 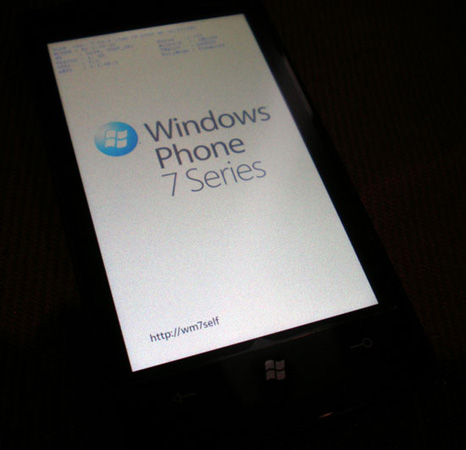 Apologies for the depth of focus at the top; unfortunately the build details aren't visible. Most I can make out are the words "Region," "Build," "BIOS," and "[...] 29, 2010." If you want to pick apart the original image, you can find it in the gallery. Either way, it isn't really important since there were so many different builds of WP7S running around the entire conference.

The first thing that struck me while playing with the demo was how little justice any of the videos I've seen so far do the title; it looks fabulous. That's likely a function of the dot pitch of the 800 x 480, 3.7" display well exceeding the spatial resolution of the video hardware media venues (myself included) are using to record the phone. I think it's safe to say it looks above the quality of titles I've seen on any Android hardware or the iPhone 3GS. And this is without any custom programmable shaders to boot! More on that later. My point is that there's something lost in all of these demonstrations until you really get to sit down and try the hardware yourself.

Qualitatively, this hands-on felt smoother and like it had a higher average framerate than in the demonstration video from the keynote in our previous article. Pay attention specifically to how framerate remains largely unaffected when the achievement unlock bar transitions down and back up. Now compare that to the previous video. It didn't feel nearly as laggy here.

Next up was Goo Splat, a Zune HD game written in XNA Game Studio 3.1 which was ported to XNA Game Studio 4.0 and WP7S. What's important here is that the title leverages four point multitouch. Why four point when all apps predominantly use a maximum of two? To afford developers the flexibility to make games and other software leveraging much more complicated input schemes. And to of course support creatures with more index fingers and thumbs.

It's fair to say that porting games from XNA GS 3.1 to XNA GS 4.0 will be a lot easer than trying to play multitouch games while recording them at the same time.

Andre and I talked about what casual gamers can expect to get out of WP7S. FPS titles are still the bread and butter of both console and PC gaming, but I asked about what genres he thinks will really leverage the unique set of strengths and weaknesses present on a handset. His answer was asynchronous gaming, and I think this is largely where cloud service integration will shine. Users check their phones when they have time - in line, waiting at a bus stop, walking, or while being idle. It's in these few moments of downtime that Andre (and the rest of the XNA team) hopes will live an asynchronus game of scrabble or turn based strategy against another opponent with a WP7S device.

This is where the potential of leveraging Xbox LIVE's existing userbase, as well as WP7S really could shine. I asked Andre if a Gold subscription was required to get in on WP7S gaming, and his answer was no - all WP7S games will work with a free silver account.