Although we gave AMD’s 890GX/SB850 a lukewarm reception last week, there’s no denying that a sub $150 price point for a feature laden board such as the ASUS M4A89GTD Pro is deserving of closer inspection.

While most of the boards within a certain price bracket follow a common component formula, ASUS and ASRock have managed to segregate themselves by breaking rank and offering hardware level core unlocking for budget dual/tri-core AMD processors. That means that you can buy a sub $100 CPU and unlock it at your leisure to enjoy 4 core number crunching. The feature itself is not new per se, it’s just that AMD decided to drop support for ACC on series 8 chipsets, leaving vendors to do things on their own accord. ASUS’ workaround is almost certain to have upset AMD, but we think they made the right choice - if moving to the 8-series chipsets meant giving up core unlocking, many enthusiasts wouldn't. 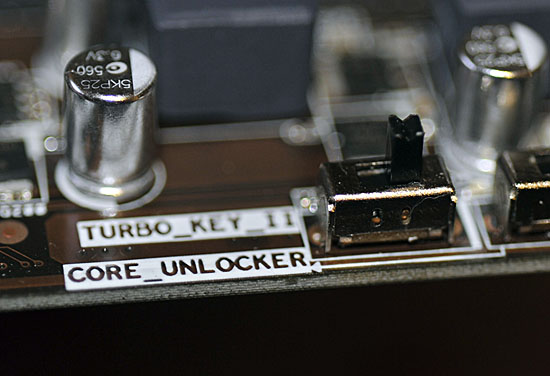 If you take a look over at the blue corner (Intel), you’ll see that sub $150 expenditure almost exclusively limits you to the micro-ATX and mini-ITX form factors on the H55/H57 chipsets. While such motherboards are perfect in the context of small HTPC builds, there are times when users need increased levels of plug-in flexibility and future-friendly upgrade paths, and that’s where a full sized ATX motherboards start to make sense.

We’ve got a couple of AMD board reviews lined up for you this month, kicking-off today with the M4A89GTD Pro, as subjected to our standard test suite. Do note that we’re still in the process of bringing you a meaningful SATA 6G performance comparison – we should have a dedicated article up on this shortly.

One of the things that came to light during our first look at the AMD 890GX platform was an issue with our Sharkoon USB QuickPort. After a lot of back and forth, it’s been discovered that the problem lies with Sharkoon’s QuickPort firmware (the controller is made by Lucidport) and not ASUS’ M4A89GTD Pro.

ASUS have since acquired six Sharkoon QuickPort units and have discovered three different firmware releases have been used by Lucidport/Sharkoon at random, while our lab unit contains a fourth. Sadly, none of these firmware versions sit well with the AMD chipsets due to a ‘USB hand-off issue’. ASUS have reported to us that USB 3 drives from BYTECC and KINGWIN work fine with the AMD chipsets, although our advice would be to hold off for a few weeks while we find out which controllers these units contain and if Sharkoon’s problem can be fixed via a firmware update.

That leaves us with a few things on the M4A89GTD Pro that need attention, the first relates to S3 sleep resume. We used the Corsair TX 950 for our testing and found a hit and miss scenario because there are instances where pressing the power button to instigate resume does not work after the board has been in S3 state for 2~3 hours; the only way to get the board to post again is to switch off at the mains, let residual power drain from the PSU and then turn back on. It’s not something that manifests all the time, so tracing it down could prove a little tricky, although we’re told ASUS is working around-the-clock to find the problem.

The other area of operation that needs some tuning relates to how the M4A89GTD Pro handles Elpida Hyper based memory modules for overclocking. When used in conjunction with ASUS’s ‘Core Unlocker’ feature; a failed overclock can result in the need to clear CMOS before the board will post again with 4 cores active. In fact, we found that the Hyper based modules are more stable at CAS 6, than they were at CAS 7 or 8 on this motherboard. We were sent a beta BIOS late last week that improves memory compatibility and although things are a little better, the Elpida Hyper issues are persistent - there’s clearly a need for more work.

Once you work out how to circumvent some of these quirks, the M4A89GTD Pro does overclock quite well – get it dialed in properly and the board is comfortable holding 8GB of memory stable whilst maintaining high memory controller frequencies in tandem. We managed to squeeze a perfectly respectable 4GHz from our Phenom X2 555 processor, unlocked to 4 cores with 8GB of memory running DDR-3 1600MHz 6-7-6-18 timings at a 1T Command Rate using our Corsair Dominator GT modules.

The BIOS level utility was a little hit and miss for us depending upon which memory modules we were using. With Elpida Hyper modules the board has a tendency to select CAS 8 based timing sets which does not sit well with the current BIOS releases, resulting in an unstable overclock. Using more conventional and affordable memory like the Corsair 1600MHz Dominator kits, we obtained an easy 3.6GHz overclock with CAS 9-9-9-27 timings at a 2T Command Rate.

It’s the OS level Turbo-V utility where ASUS have really nailed automated overclocking, there are a variety of tuning options which can result in overclocks right on the hilt and beyond where we’d setup our components manually. ASUS have done a great job in simplifying what can be a complex process for many users.

Had the random S3 resume issue not have been present, we’d have been hard pushed not to give this board an award for catering to every type of user and providing a feature set that belies its price. What we'll do for now while ASUS polishes the M4A89GTD Pro, is encourage you to put it at the top of your shortlist as one to watch...