In the second quarter of this year, we’ll have affordable servers with up to 48 cores (AMD’s Magny-cours) and 64 threads (Intel Nehalem EX). The most obvious way to wield all that power is to consolidate massive amounts of virtual machines on those powerhouses. Typically, we’ll probably see something like 20 to 50 VMs on such machines. Port aggregation with a quad-port gigabit Ethernet card is probably not going to suffice. If we have 40 VMs on a quad-port Ethernet, that is less than 100Mbit/s per VM. We are back in the early Fast Ethernet days. Until virtualization took over, our network intensive applications would get a gigabit pipe; now we will be offering them 10 times less? This is not acceptable.

Granted, few applications actually need a full 1Gbit/s pipe. Database servers need considerably less, only a few megabits per second. Even at full load, the servers in our database tests rarely go beyond 10Mbit/s. Web servers are typically satisfied with a few tens of Mbit/s, but AnandTech's own web server is frequently bottlenecked by its 100Mbit connection. Fileservers can completely saturate Gbit links. Our own fileserver in the Sizing Servers Lab is routinely transmitting 120MB/s (a saturated 1Gbit/s link). The faster the fileserver is, the shorter the waiting time to deploy images and install additional software. So if we want to consolidate these kinds of workloads on the newest “über machines”, we need something better than one or two gigabit connections for 40 applications.

Optical 10Gbit Ethernet – 10GBase-SR/LR - saw the light of day in 2002. Similar to optical fibre channel in the storage world, it was very expensive technology. Somewhat more affordable, 10G on “Infiniband-ish” copper cable (10GBase-CX4) was born in 2004. In 2006, 10Gbit Ethernet via UTP cable (10GBase-T) held the promise that 10G Ethernet would become available on copper UTP cables. That promise has still not materialized in 2010; CX4 is by far the most popular copper based 10G Ethernet. The reason is that the 10GBase-T PHYs need too much power. The early 10GBase-T solutions needed up to 15W per port! Compare this to the 0.5W that a typical gigabit port needs, and you'll understand why you find so few 10GBase-T ports in servers. Broadcom reported a breakthrough just a few weeks ago: Broadcom claims that their newest 40nm PHYs use less than 4W per port. Still, it will take a while before the 10GBase-T conquers the world, as this kind of state-of-the art technology needs some time to mature.

We decided to check out the some of the more mature CX4-based solutions as they are decently priced and require less power. For example, a dual-port CX4 card goes as low as 6W… that is 6W for the controller, two ports and the rest of the card. So a complete dual-port NIC needs considerably less than one of the early 10GBase-T ports. But back to our virtualized server: can 10Gbit Ethernet offer something that the current popular quad-port gigabit NICs can’t?

Adapting the network layers for virtualization

When lots of VMs are hitting the same NIC, quite a few performance problems may arise. First, one network intensive VM may completely fill up the transmit queues and block the access to the controller for some time. This will increase the network latency that the other VMs see. The hypervisor has to emulate a network switch that sorts and routes the different packets of the various active VMs. Such an emulated switch costs quite a bit of processor performance, and this emulation and other network calculations might all be running on one core. In that case, the performance of this one core might limit your network bandwidth and raise network latency. That is not all, as moving data around without being able to use DMA means that the CPU has to handle all memory move/copy actions too. In a nutshell, a NIC with one transmit/receive queue and a software emulated switch is not an ideal combination if you want to run lots of network intensive VMs: it will reduce the effective bandwidth, raise the NIC latency and increase the CPU load significantly. 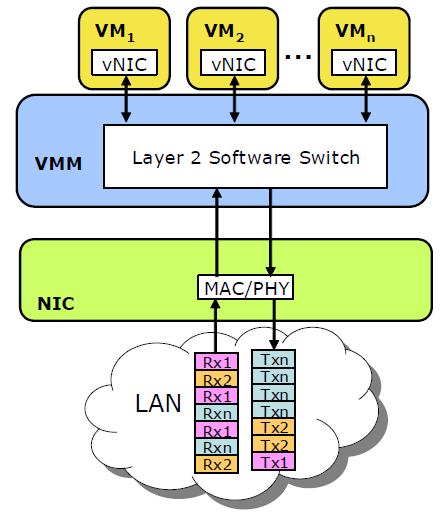 Without VMDQ, the hypervisor has to emulate a software switch. (Source: Intel VMDQ Technology)

Several companies have solved this I/O bottleneck by making use of the multiple queues". Intel calls it VMDq; Neterion calls it IOV. A single NIC controller is equipped with different queues. Each receive queue can be assigned to a virtual NIC of your VM and mapped to the guest memory of your VM. Interrupts are load balanced across several cores, avoiding the problem that one CPU is completely overwhelmed by the interrupts of tens of VMs. 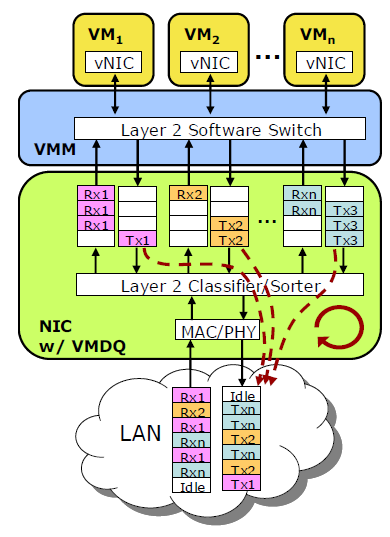 When packets arrive at the controller, the NIC’s Layer 2 classifier/sorter sorts the packets and places them (based on the virtual MAC addresses) in the queue assigned to a certain VM. Layer 2 routing is thus done in hardware and not in software anymore. The hypervisor looks in the right queue and then routes those packets towards the right VM. Packets that have to go out of your physical server are placed in the transmit queues of each VM. In the ideal situation, each VM has its own queue. Packets are sent to the physical wire in a round-robin fashion.

The hypervisor has to support this and your NIC vendor must of course have an “SR-IOV” capable driver for the hypervisor. VMware ESX 3.5 and 4.0 have support for VMDq and similar technologies, calling it “NetQueue”. Microsoft Windows 2008 R2 supports this too, under the name “VMQ”.