The launch of the Radeon HD 5000 series has been a noticeably different than other major GPU launches in the last half-decade. Process problems over at TSMC and a lack of a competitive card from NVIDIA has resulted in a level of demand that until this year could not be satiated. Cypress chips were going out the door to stores practically as fast as they came out of the fab, leaving card vendors with too few chips to do custom card lines. What we have seen up until now has been limited to reference cards, with only minor variations such as a different cooler or a BIOS that allows voltage control. The supply of Cypress chips has only finally reached the point where there’s a suitable number of them for card vendors to produce a custom design.

Today Sapphire is launching a pair of Radeon HD 5850 cards: the 5850 Vapor-X and the 5850 Toxic Edition. Both of these cards use a new custom design – a custom PCB, custom chokes, and of course a custom cooler – making the set of them the first custom 5850 on the market. Both are factory overclocked, with the Vapor-X clocking in at 735MHz/1050MHz, and the Toxic at 765MHz/1125MHz, and are otherwise identical. Sapphire tells us that only the Toxic will be launching in North America, while the Vapor-X will be available elsewhere. As such, today we were looking at their 5850 Toxic Edition.

Diving right in to things, the most distinctive feature of course is the cooler on the Toxic. It’s one of Sapphire’s trademark vapor-chamber coolers as found through their entire Vapor-X/Toxic line, and is designed to be more efficient and quieter than the standard heatpipe-only coolers found on reference cards. Compared to the reference cooler it’s also open-ended, meaning unlike the reference cooler it’s not a blower that exhausts all air outside the case. Rather with a large, centered fan, the Toxic’s cooler pushes air out both the front and the rear of the card. 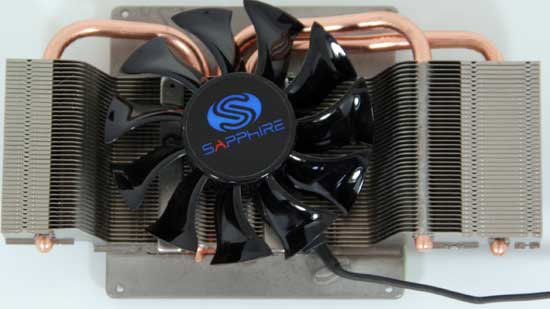 Cracking open the cooling apparatus we find a fairly large heatsink with 3 heatpipes embedded in it, running down to the vapor chamber in the base plate. The use of 3 heatpipes means the heatsink is asymmetrical, with more pipes going to towards the rear of the card than the front.

With the cooler removed, we can see the rest of the custom kit on the Toxic: the custom PCB and chokes. Right away you’ll notice that Sapphire’s custom PCB is longer than the stock PCB; 10.1” versus 9.5”. The result of this is not only more space that Sapphire has filled with capacitors and chokes, but the entire board is basically shifted to the right compared to the reference board. Meanwhile we can see Sapphire’s custom “Black Diamond” chokes, which are grooved for better airflow and heat dissipation.

One particularly interesting deviation from the reference design is that rather than trying to attach the main VRMs to the cooler, Sapphire has given the VRMs their own small heatsink. This heatsink sits below the larger heatsink attached to the GPU, and catches airflow from the fan bound for the rear of the card. Based on our past observations, the cooling on VRMs on the reference 5800 and 5900 designs has been sketchy – for our 5970 in particular we found that the VRMs would overheat under a modest overclock. Our 5850 reference samples have not provided similar problems thanks to the lower operating voltage of a 5850, but this should still prove to be a better method of cooling the VRMs than the simple metal bar on a reference 5850. 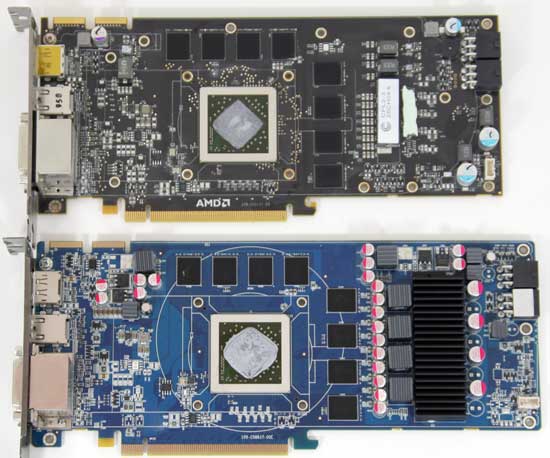 The fact that the card deviates this much from the AMD reference design means that some considerations need to be taken in to account compared to the 5850. At around 0.5” longer than the reference design, the Toxic can get close to impeding whatever may lie behind the card. Sapphire kept the 5850’s rear-facing PCIe power plugs rather than going with 5870-style top-facing plugs, so you have to factor in the additional space required by the cables. In our Spedo case, this is as long as a fully installed card can get without running in to the case fan behind the video card. 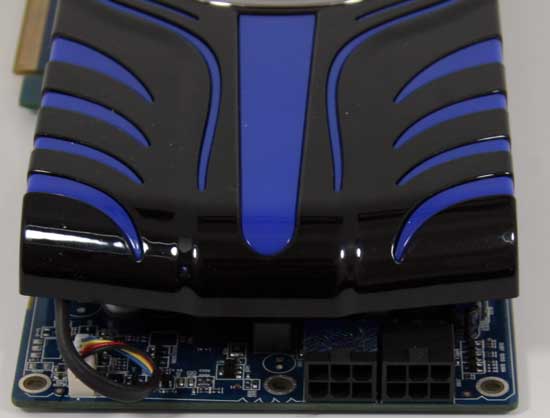 The open-ended design also changes cooling considerations slightly. With the card venting hot air out the rear of the card along with the front, we found having a fan behind the card to feed it fresh air to be counter-productive – we were better off removing the fan and letting the card blow air back. On the plus side, the fact that the cooler on this card is open-ended on both sides means that unlike the full sheath on the reference card, this card is compatible with tool-less locking mechanisms such as what’s on our Spedo case.

Moving on, besides the card the rest of the package is unremarkable. The card comes in a full size box, which contains a manual, driver CD, a mid-length Crossfire bridge, a DVI-to-VGA adaptor, and a pair of molex-to-PCIe power adapters. Sapphire doesn’t make their own set of overclocking tools, and with the 5850’s overdrive limit of 775/1125, you’ll need 3rd party tools to do any serious overclocking.