Preventing Espionage at AMD: How The Eyefinity Project Came to Be

There’s one more thing Carrell Killebrew has done for the world. He’s single handedly responsible for getting Eyefinity included in the Evergreen stack.

It started like this. All GPU vendors go to their customers (OEMs) and ask them for features they’d like to have. The notebook vendors wanted a total of 6 display outputs from the GPU, although they only needed two to be active at the same time. Two paths could be used for LCD panels, two could be used for external outputs (VGA + DVI/HDMI) and two routed to a docking station connector.

Carrell thought it would be a shame to have all of these output pins but not be able to drive all six at the same time. So he came up with a plan to be able to drive at least 3 displays on any Evergreen card. The high end cards would support 6 displays simultaneously.

His desire to do this wasn’t born out of pure lunacy, Carrell does have a goal in mind. Within the next 6 years he wants to have a first generation holodeck operational. A first generation holodeck would be composed of a 180 degree hemispherical display with both positionally and phase accurate sound. We’ll also need the pixel pushing power to make it all seem lifelike. That amounts to at least 100 million pixels (7 million pixels for what’s directly in front of you, and the rest for everything else in the scene), or almost 25 times the number of pixels on a single 30” display. 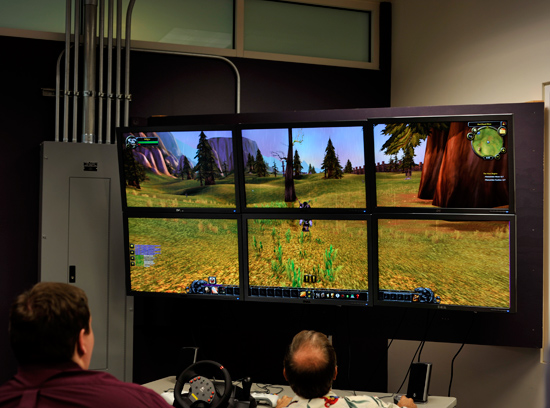 We’re not quite at 2016, so he had to start somewhere. And that somewhere happened to be with enabling a minimum of 3 and a maximum of 6 displays, per card, for all members of the Evergreen family. Today we know the technology as Eyefinity, but internally Carrell called it SunSpot.

Carrell didn’t want anyone knowing about SunSpot, so he kept it off the Cypress PRS. Through some very clever maneuvering he managed to keep it off of the radar while engineering hammered out the PRS, and even managed to keep it off of the chopping block when the GPU was cut down in size. He knew that if anyone got wind of it, they’d ask him to kill it while the chip was being scaled down. To make matters worse, if anyone outside of a trusted few became aware of it - there was the chance that NVIDIA would have time to copy and implement the feature. It then became Carrell’s goal to keep SunSpot as quiet as possible.

As I just mentioned, no one on the list could talk about SunSpot in a place where someone not on the list could overhear. And if you wanted to get someone added to the list, it had to be approved - the final say was in the hands of none other than Carrell Killebrew.

The SunSpot engineers went to work on the feature, bringing in others only when absolutely necessary. The team grew one person at a time and eventually plateaued. The software engineers weren’t made aware of SunSpot until the last minute. Carrell only gave them enough time to enable SunSpot, they didn’t get the luxury of advance knowledge.

Carrell went to David Glenn, head of software engineering at ATI and asked him what the latest possible date that they needed to have someone in software working on this stuff. David gave him a date. Carrell asked for a list of names of people who needed to know. David gave him three names. On that date, the SunSpot team called up those three people and said “we need to tell you something”. Needless to say, no one was happy about Carrell’s secrecy. Some of the higher ups at ATI knew Carrell had people working on something, they just had no idea what it was. 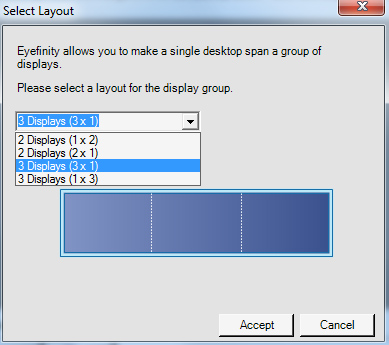 It's the software that ultimately made Eyefinity

When in his own cube Carrell always spoke about SunSpot in code. He called it feature A. Carrell was paranoid, and for good reason. The person who sat on the other side of Carrell’s cube wall left to work for NVIDIA a couple months into the SunSpot project. In all, ATI had three people leave and work for NVIDIA while SunSpot was going on. Carrell was confident that NVIDIA never knew what was coming.

Other than the obvious, there was one real problem with Carrell’s secrecy. In order for Eyefinity to work, it needed support from external companies. If you’ll remember back to the Radeon HD 5800 series launch, Samsung announced thin-bezel displays to be sold in 1, 3 or 6 panel configurations specifically for Eyefinity setups. There was no way to keep SunSpot a secret while still talking to OEMs like Samsung, it’s just too big of a risk. The likelihood of someone within ATI leaking SunSpot to NVIDIA is high enough. But from an employee for an OEM that deals with both companies? That’s pretty much guaranteed.

For a feature like SunSpot to go completely unnoticed during the development of a GPU is unheard of. Carrell even developed a rating system. The gold standard is launch; if SunSpot could remain a secret until the launch, that’s gold. Silver is if they can keep it a secret until they get chips back. And the effort would get a bronze if they could keep it a secret up to tape out, at that point NVIDIA would be at least one full product cycle behind ATI.

Eventually, Rick Bergman, GM of graphics at AMD, committed to keeping SunSpot a secret until bronze, but he told Carrell that when they got to tape out they were going to have a serious talk about this.

Time went on, SunSpot went on, Carrell and crew made it to bronze. The chip had taped out and no one knew about Carrell’s pet project. It got a little past bronze and Rick asked Carrell to have that talk. There were three customers that would really benefit from talking to them about SunSpot, then the killer: it would also help ATI competitively.

Carrell didn’t want to risk tipping off the competition to SunSpot, but he knew that in order to make it successful he needed OEMs on board. The solution was to simply add those at the OEMs who needed to know about SunSpot to the list. The same rules applied to them, and they were given a separate NDA from existing NDAs in place between AMD and the OEM. AMD legal treated SunSpot as proprietary IP, if anyone else within an OEM needed to know about it they needed to first ask for permission to discuss it. To make sure that any leaks would be traceable, Carrell called SunSpot a different name to each of the three OEMs involved.

A few weeks prior to the Cypress launch one of the CEOs at one of the OEMs saw Eyefinity and asked to show it to someone else. Even the CEO’s request needed to be approved before he could share. Surprisingly enough, each of the three OEMs abided by their agreement - to Carrell’s knowledge the tech never leaked.

While NVIDIA demonstrated its own triple-display technology at this year’s CES, it’s purely a software solution; each GPU is still only limited to two display outputs. I asked Carrell what he thought about NVIDIA’s approach, he was honest as always. 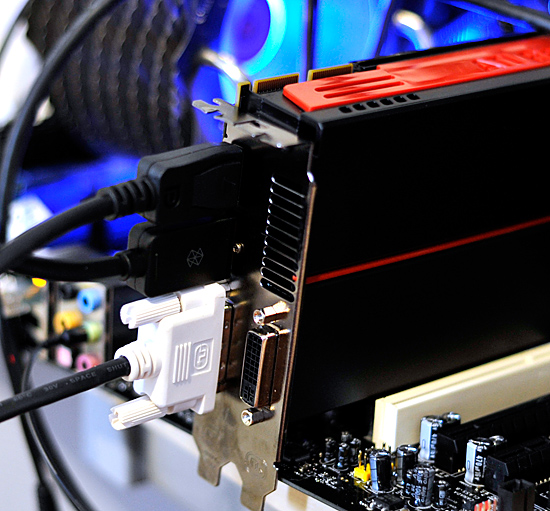 Eyefinity allows for 3 outputs from a single GPU

ATI considered a software only approach a while ago, but ultimately vetoed it for a couple of reasons. With the software-only solution you need to have a multi-GPU capable system. That means a more expensive motherboard, a more powerful PSU and a little more hassle configuration wise. Then there were the performance concerns.

One scenario is that you have very noticeable asymmetry as you have one card driving one display and the other card driving two displays. This can cause some strange problems. The other scenario is that you have all three displays coming off of a single card, and in alternating frames you send display data from one GPU to the next either via PCIe or a CF/SLI connector. With 6 displays, Carrell was concerned that there wouldn’t be enough bandwidth to do that fast enough.

There were also game compatibility concerns that made ATI not interested in the software approach. Although I was quick to point out that FOV and aspect ratio issues are apparent in many games today with Eyefinity. Carrell agreed, but said that it’s a lot better than they expected - and better than it would have been had they used a software-only solution.

Not to belittle the efforts of ATI’s software engineers here. While Carrell was one of three people originally responsible for SunSpot, they weren’t the ones who made it great. In Carrell’s own words “In the end, I’d say the most key contributions came from our Software engineering team. SunSpot is more a software feature than a hardware one”. ATI’s software team, despite not being clued into the project until it was implemented in hardware, was responsible for taking SunSpot and turning it into Eyefinity.

As for the ridiculous amount of secrecy that surrounded SunSpot? It wasn’t just to keep Carrell entertained. AMD has since incorporated much of Carrell’s brand of information compartmentalization into how it handled other upcoming features. I have to wonder if Carrell somehow managed to derive Apple’s equation for secrecy.