Dell U2711 Lag and Response Time

Some users are very concerned with display lag and pixel response time. For others, they really don't notice anything unless a particular display is very sluggish. I fall into the latter camp, though I do notice the processing lag when it's above ~40ms (e.g. on the Dell 2408WFP and LaCie 324, my mouse input just felt off.) To test for display lag, we run the Wings of Fury benchmark in 3DMark03, with the output set to the native LCD resolution - in this case 2560x1440. We clone the output to our reference LCD, an HP LP3065, snap a bunch of pictures, toss out any where the time readout isn't clear, and then average the remaining results (at least 10, and usually 20 or more).

As a reminder, the reference HP LP3065 is one of the best LCDs we currently possess in terms of not having display lag. (The lack of a built-in scaler probably has something to do with this.) While we know some of you would like us to compare performance to a CRT, few users have CRTs these days and all we're really interested in measuring is the relative lag. It's possible we will find an LCD that ends up with a negative result, meaning it's faster than the LP3065, but the best we have managed so far is a tie. 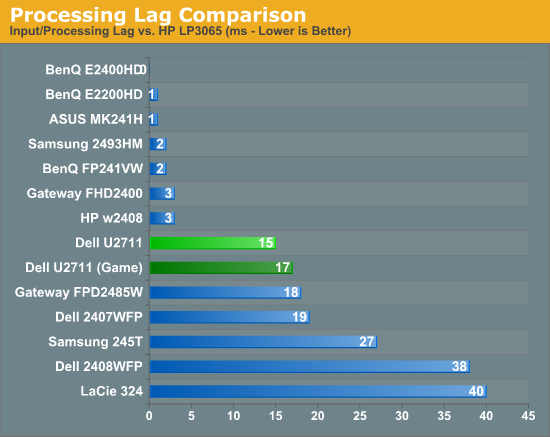 So far, all of the S-PVA panels we have tested show a significant amount of input lag, ranging from 18ms up to 40ms. In contrast, the TN and S-IPS panels show little to no processing lag (relative to the HP LP3065). The BenQ FP241VW with an S-MVA panel performs similarly to the TN and IPS panels, with an average display lag of 2ms - not something you would actually notice compared to other LCDs. What about the new U2711?

We tested with the "Graphics" setting and Adobe RGB as well as "Video" and "Game" - we figured the latter might disable some post-processing and result in less lag. That turned out to be incorrect, as our measured lag actually went up 2ms. However, in practice the settings are pretty much tied. That means the U2711 has around one frame of lag relative to our best LCDs, but it still has a lot less lag than our worst offenders. As stated already, I didn't notice lag in using the U2711 - just like I didn't notice lag on the 2407WFP or the FPD2485W. I did notice slight lag on the Samsung 245T and some clear lag on the 2408WFP and LaCie 324, but the threshold for lag varies and you'll need to determine if 15-17ms is too much or not for you. If you've tried any TN panels and still noticed lag, we would expect every current LCD to be above your "lag threshold".


Despite what the manufacturers might advertise as their average pixel response time, we have found most of the LCDs are basically equal in this area - they all show roughly a one frame "lag", which equates to a response time of around 16ms. Some transitions are faster than others, but the above is representative of what we found in a study of numerous photos. If you look at the tail of the center plane, you can see a slight ghost image before and after the dominant frame. Some of that will come from the camera (we use a 1/120s shutter speed), but most of it comes from the LCD panel. In this case, the U2711 panel does outperform most LCDs that we've tested, where it was often possible to see at least three frames more clearly than the two slight ghosts in the above image.