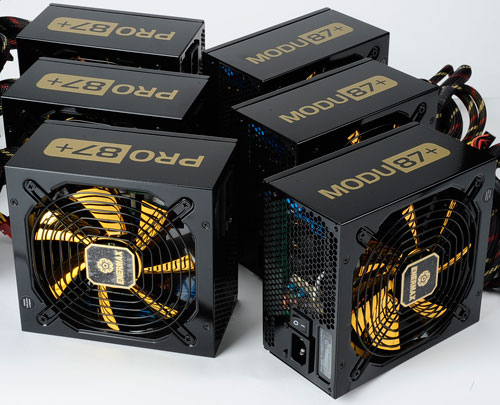 The new series from Enermax surprised us as we had imagine something completely different (thinking back to Computex from last year). At that time both series were equipped with a 12mm Magma fan and had a very rough sandblasted paint scheme. Enermax has returned to a more traditional look and we think the change was only for the better. In an effort to reduce costs Enermax had to keep painting to a minimum which is why these units now only come with simple black paint. On the other hand, not all the changes were an effort to reduce costs; an expensive feature for example is the 139mm shiny golden fan. It fits quite well with the design aesthetic actually and makes this new design look better than the previous one with the red Magma fan. There is one little detail that doesn't quite fit, however: the Enermax logo in the middle of the fan guard looks a little odd with the square shape over a circular fan. As always, beauty is in the eye of the beholder.

The Modu87+ power supplies have the cable management jacks at the front of the unit. There are five jacks with five pins and two with twelve. The jacks have the same size and shape as on other Enermax power supplies, and since the company offers separate cables in retail packages you can use old cables even if you want to switch to a new Enermax unit. Above the usual main switch and AC input you will find a small area with a note saying "Please put ENERMAX log sticker here." You can find the Enermax sticker in the package, but why bother? Enermax explained the reason for not attaching it in the factory is that the company doesn't know what direction the user is going to mount the power supply, since various cases have the PSU at the bottom and others have it at the top. If they pre-apply the sticker, it would be upside-down for some users. If you want your system to be "just so" after assembly, this might be an important consideration.

Below the AC inlet and main switch you will find something new. These two hooks belong to the newly acquired patent from Zippy and now offered by Enermax called CordGuard. 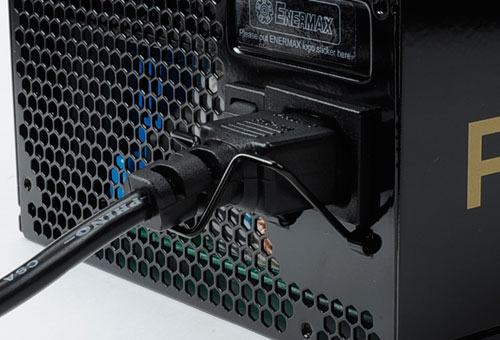 The CordGuard is nothing more than a small wire-hook attached to the power supply. Once you connect the power cord you can lift the hook up to securely fasten the cable. This makes sense in households where you have the PC standing in an open space and someone could accidently pull out the cable. It might not be a critical feature for everyone, but it will undoubtedly come in handy for some users. Enermax will be modifying all of their PSUs to include the CordGuard function going forward, but we really don't think this is necessary.

Enermax posted this video on YouTube to show real life experiences and how they could be solved with CordGuard. We think it's dangerous to let kids play behind a PC in the first place, and let's just hope they don't notice the power switch….