Atom vs. Cortex A9

With Atom Intel adopted an in-order architecture to save power. With Cortex A9, ARM went out of order to improve performance. Despite the fundamental difference, Atom and ARM's Cortex A9 appear similar from a high level.

Atom has two instruction decoders at the front end, as does the A9. The dual decoders feed an instruction queue that can dispatch out of order:

Both architectures appear to have a unified instruction queue that feed four dispatch ports. Atom has two ports that feed AGUs and/or ALUs, and two ports for the FPU (one for SSE and one for FP ops). A9 has two ALU ports, one FPU/NEON port and one AGU port. 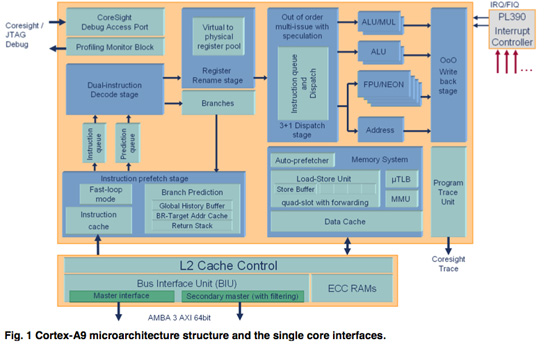 Atom's advantage here is Hyper Threading as two threads get to share its execution resources simultaneously. Cortex A9's advantage is in a shallower pipeline and out of order execution. Both promote higher IPC but go about it in very different ways. If ARM can get clock speeds high enough they may actually have a higher performance option.

Honestly, Tegra 2 is one of the most exciting things I've seen at CES - but it's mostly because of its dual Cortex A9 cores. While I'm excited about improving 3D graphics performance on tablets and smartphones, I believe general purpose performance needs improvement. ARM's Cortex A9 provides that improvement.

The days of me pestering smartphone vendors to drop ARM11 and embrace Cortex A8 are over. It's all about A9 now. NVIDIA delivers one solution with Tegra 2, but TI's OMAP 4 will also ship with a pair of A9s.

If NVIDIA is to be believed, then Tegra 2 is the SoC to get. I suspect that's being somewhat optimistic. But rest assured that if you're buying a smartphone in 2010, it's not Snapdragon that you want but something based on Cortex A9. NVIDIA is a viable option there and we'll have to wait until Mobile World Congress next month to see if there are any promising designs based on Tegra 2.

And just in case I wasn't clear earlier, we will see the first Tegra based Android phone in 2010. I just hope it's good.