Last week Johan posted his thoughts from an server/HPC standpoint on AMD's roadmap. Much of my analysis was limited to desktop/mobile, so if you're making million dollar server decisions then his article is better suited for your needs.

He also unveiled a couple of details about AMD's Bulldozer architecture that I thought I'd call out in greater detail. Johan has been working on a CMP vs. SMT article so I'll try to not step on his toes too much here.

It all started about two weeks ago when I got a request from AMD to have a quick conference call about Bulldozer. I get these sorts of calls for one of two reasons. Either:

It's called a Module

This is the Bulldozer building block, what AMD is calling a Bulldozer Module: 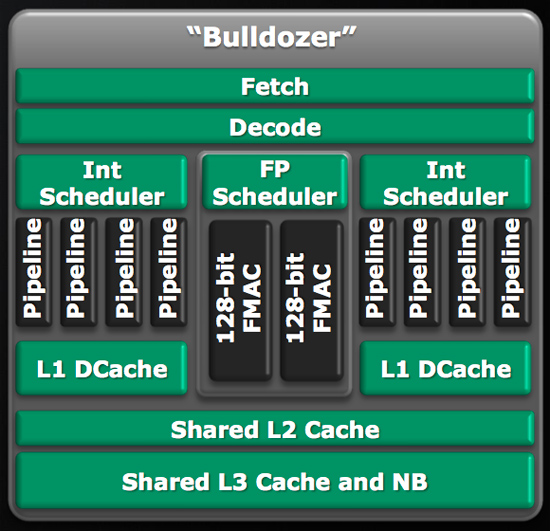 AMD refers to the module as being two tightly coupled cores, which starts the path of confusing terminology. A few of you wondered how AMD was going to be counting cores in the Bulldozer era; I took your question to AMD via email:

Also, just to confirm, when your roadmap refers to 4 bulldozer cores that is four of these cores:

Or does each one of those cores count as two? I think it's the former but I just wanted to confirm.

Think of each twin Integer core Bulldozer module as a single unit, so correct.

I took that to mean that my assumption was correct and 4 Bulldozer cores meant 4 Bulldozer modules. It turns out there was a miscommunication and I was wrong. Sorry about that :)

Inside the Bulldozer Module

There are two independent integer cores on a single Bulldozer module. Each one has its own L1 instruction and data cache (thanks Johan), as well as scheduling/reordering logic. AMD is also careful to mention that the integer throughput of one of these integer cores is greater than that of the Phenom II's integer units.

Behind the FP scheduler are two 128-bit wide FMACs. AMD says that each thread dispatched to the core can take one of the 128-bit FMACs or, if one thread is purely integer, the other can use all of the FP execution resources to itself.

AMD believes that 80%+ of all normal server workloads are purely integer operations. On top of that, the additional integer core on each Bulldozer module doesn't cost much die area. If you took a four module (eight core) Bulldozer CPU and stripped out the additional integer core from each module you would end up with a die that was 95% of the size of the original CPU. The combination of the two made AMD's design decision simple.AMD has come back to us with a clarification: the 5% figure was incorrect. AMD is now stating that the additional core in Bulldozer requires approximately an additional 50% die area. That's less than a complete doubling of die size for two cores, but still much more than something like Hyper Threading.