The CPU core is simply one piece of the puzzle though. In the application processor business it’s the entire SoC that matters, not just the CPU core. While Intel, Samsung and TI (among others) license graphics cores from Imagination Technologies, Marvell uses a company called Vivante to provide graphics IP.

Only the ARMADA 500 and 600 series have hardware 3D graphics powered by Vivante’s GPU core. Unfortunately I have absolutely no information on its capabilities. Marvell is listing 1080p video playback as a feature so we at least have a full video decode engine.

As I mentioned at the start of this piece, the ARM market is around 4 billion chips per year. Marvell expects this to grow to 5 billion as the market for smart devices expands (smartphones, smart TVs, smart, uh, otherthings).

Marvell itself shipped 1 billion processors last year, 65% of them with a core that implemented an ARM instruction set. The company has an engineering team (software + hardware) of over 1000 people, supposedly the largest ARM development team in the industry.

It takes this team around 6 months to get a chip from design to tapeout, add a couple more for integration and then to get it back from the fab. All in all you’re looking at a yearly cadence for new chips out of Marvell. 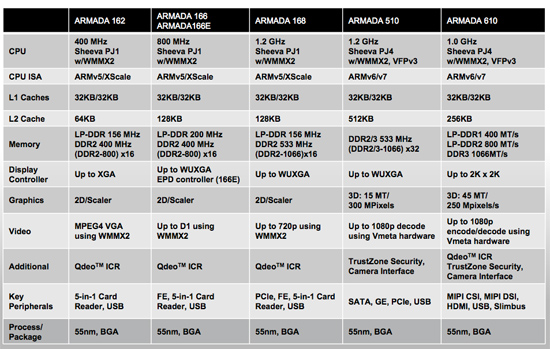 As smartphones become more PC-like in functionality, we’ll need to have faster hardware. Competition is a good thing and in the SoC space there’s lots of it. Marvell offers a unique twist on ARM, time will tell how it holds up to ARM’s own designs. Marvell believes it may even have more engineers working on microprocessors than ARM itself, something that will be necessary as these designs get more complex in the future.

In many senses the SoCs going into these smartphones are going through the same evolution we saw in the PC industry over the past 20 years, just on an accelerated schedule. I’m betting we’ll see the same sort of thinning in the SoC CPU and GPU markets as we did in the PC industry. We’re down to three companies in the PC space, wonder how many we’ll end up with in the SoC market.